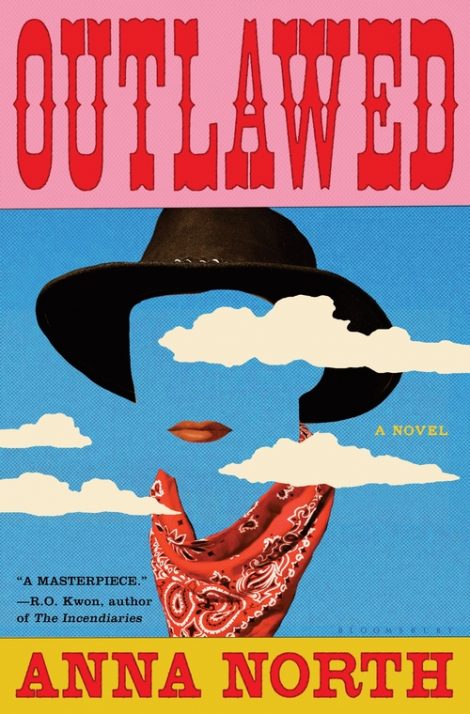 The Crucible meets True Grit in this riveting adventure story of a fugitive girl, a mysterious gang of robbers, and their dangerous mission to transform the Wild West.

The day of her wedding, 17 year old Ada’s life looks good; she loves her husband, and she loves working as an apprentice to her mother, a respected midwife. But after a year of marriage and no pregnancy, in a town where barren women are routinely hanged as witches, her survival depends on leaving behind everything she knows.

The Crucible meets True Grit in this riveting adventure story of a fugitive girl, a mysterious gang of robbers, and their dangerous mission to transform the Wild West.

The day of her wedding, 17 year old Ada’s life looks good; she loves her husband, and she loves working as an apprentice to her mother, a respected midwife. But after a year of marriage and no pregnancy, in a town where barren women are routinely hanged as witches, her survival depends on leaving behind everything she knows.

She joins up with the notorious Hole in the Wall Gang, a band of outlaws led by a preacher-turned-robber known to all as the Kid. Charismatic, grandiose, and mercurial, the Kid is determined to create a safe haven for outcast women. But to make this dream a reality, the Gang hatches a treacherous plan that may get them all killed. And Ada must decide whether she’s willing to risk her life for the possibility of a new kind of future for them all.

Featuring an irresistibly no-nonsense, courageous, and determined heroine, Outlawed dusts off the myth of the old West and reignites the glimmering promise of the frontier with an entirely new set of feminist stakes. Anna North has crafted a pulse-racing, page-turning saga about the search for hope in the wake of death, and for truth in a climate of small-mindedness and fear.

Anna North is a graduate of the Iowa Writers’ Workshop and the author of two previous novels, America Pacifica and The Life and Death of Sophie Stark, which received a Lambda Literary Award in 2016. She has been a writer and editor at Jezebel, BuzzFeed, Salon, and the New York Times, and she is now a senior reporter at Vox. She grew up in Los Angeles and lives in Brooklyn.

“North’s knockout latest chronicles the travails of a midwife’s daughter who joins a group of female and nonbinary outlaws near the end of the 19th century . . . The characters’ struggles for gender nonconformity and LGBTQ rights are tenderly and beautifully conveyed. This feminist western parable is impossible to put down.” –  Publishers Weekly (starred review)

“From the author of the Lambda Literary Award-winning The Life and Death of Sophie Stark comes an alt-history feminist western . . . Think Foxfire by way of Maddie from True Grit, yet North’s swashbuckling saga is wholly her own.” –  O, the Oprah Magazine (Best LGBTQ Books of 2021)

“Earns its place in the growing canon of fiction that subverts the Western genre by giving voice to the true complexity of gender and sexual expression, as well as race relations, that has previously been pushed to the margins of traditional cowboy or westward expansion tales. A genre- (and gender-) bending take on the classic Western.” –  Kirkus

“A lovely slow draw in the world of the Old West, a story about the people who don’t belong, portraying a realistic, close-minded world that only accepts women willing to fit into a specific mold . . . It’s exciting to read a Western tale that features such a range of women and queer characters, and Ada herself is a bold protagonist whose desire to learn more about the female reproductive system and how it actually functions runs fiercely in her veins. Perfect for fans of Sarah Gailey’s Upright Women Wanted.” –  Booklist

1. Throughout her travels Ada encounters spiritual leaders of all styles, from eugenicists like Dr. Lively to philosophers like the Kid. Both students of scripture, the two characters could not disagree more. Explore how the concepts of God and religion are portrayed in the novel. Is religion a vehicle for good or an excuse for punishment? Can it be both?

2. Ada struggles to apply her piety to her circumstances; she says, “It wasn’t that I didn’t believe in baby Jesus—I prayed like anyone, I always had, when I was afraid or grateful or in pain . . . It was only that I found the lessons of baby Jesus insufficient to explain the world” (29). Later, an outlaw in hiding, she laments, “If God really cared about us, why wouldn’t He let us have children so we could stay in our homes, with our families?” (87) Discuss how Ada’s faith impacts her journey. How does she balance her commitments to both faith and science? How does Ada use faith to survive?

3. Rejected from their communities, the members of the Hole in the Wall Gang create a world where conventional gender roles are obsolete. In your opinion, what can their community teach us about the significance of gender? How does gender determine our place in the social order today?

4. Discuss the Kid as a central character. The Kid is full of contradictions: a leader and an outcast, a preacher and a dissenter, an asset and a liability. The Kid tells Ada, “Years I wandered, cowboying, rustling. I lived as a man and as a woman; no life suited me. Then I met Cassie. As long as I could protect her, I told myself, I would be worth something” (234). How do you understand the Kid’s place in the novel? What does the Kid represent? And how does the Kid help the other outlaws learn about themselves?

5. The Flu is one of the novel’s silent characters. It decimates the population, organizes beliefs about witchcraft, and, by extension, endangers innocent women like Ada. In 2020, the global community was confronted with a deadly virus. Compare reactions to that pandemic with those in North’s reimagined nineteenth-century America. In what ways has increased scientific knowledge come to our aid? And in what ways are we still ruled by fear and uncertainty?

6. As she deliberates being captured, Ada asks Sheriff Branch how, in good conscience, he can participate in a system that punishes the innocent. Sheriff Branch explains, “When a child dies, or two people in love can’t conceive, or a man loses his wife in childbirth—these things aren’t bearable, Ada, not without help. But if you know why it happened, if you have someone or somebody to blame, then sometimes that’s enough to keep going” (248). In what ways does scapegoating still exist in our own systems of justice and punishment?

7. Although Ada’s profession is healing the wounded, she struggles to offer herself self-compassion; she thinks, “I wished I could think of my own failed body with that kind of care. Instead I was full of shame and fear” (186). Why is it often easier to be compassionate to others and not ourselves? How does Ada’s search for medical answers mirror her journey towards self-acceptance? By the end of the novel, do you believe that Ada has conquered her fear of herself?

8. Outlawed reminds us that all forms of sexuality have existed in every decade and century. Ada thinks, “Whether or not I liked men seemed unworthy even of that small consideration, since not liking men had never been presented to me as an option” (117). Away from the pressures of procreation, Ada and Lark have sex simply for pleasure; Ada thinks, “Afterward I felt a stillness in my body I had never felt before, as though for a moment I was complete in myself, I was all that was needed” (204). Explore how the concepts of sex and sexuality impact the novel’s characters. What is revolutionary about Ada’s experience? How does her understanding of sex and gender shift throughout the novel?

9. In the traditionally male canon of Westerns, Ada’s an outlier. She is not a stereotypical wife nor is she a classic cowboy. Ada is tickled by her ultimate disguise; she thinks, “It made me smile to think of myself as a wife to myself, the woman I could’ve been and the man I was pretending to be. Both of them luckier in life than the person I really was” (172). In your opinion, what is the author attempting to teach readers by setting Ada in this time period? How can she be understood through the lens of a Western genre?

10. Ada’s two marriages could not have been more different. Her first was voluntary and joyous, but contingent on her fertility. Her second was an excuse to escape captivity, and yet it was intimate and loving. Compare and contrast these two ceremonies and relationships. What stood out to you? Was one more sacred than another? Why? What do these disparate ceremonies say about the institution of marriage?

11. Rejected by her community and severed from her family, Ada struggles to find purpose in her life. She thinks, “Even if I was cured, if I conceived and bore a child, would I want to return to my old life? Would I go back to Fairchild with my baby on my hip, triumphant?” (37) If Ada had been a mother, how would her story have changed? Do you think she could have returned, knowing that her community had turned her away? Discuss how Ada comes to redefine her understanding of a meaningful life. Have you ever had to do the same?

12. Explore the portrayal of women in Outlawed. In Fairchild, women cast one another into exile; in the convent, women shepherd Ada to her freedom; and in the Hole in the Wall Ada lives amongst a motley gang of courageous, stealthy women who love freely and fiercely. What are the many ways in which women are persecuted throughout the novel and how do they adapt to their circumstances? Discuss the ways that women are shown to both disparage and uplift one another? What accounts for this difference? The sheriff of Fiddleback said, “When people came to cast their stones and shoes and whatnot at Caroline, the women were twice as savage as the men. If it weren’t for the women, she might have survived” (177). Does this surprise you? Why or why not?

13. Consider Lark and Ada’s relationship. Ada was banished because her womb could not produce a child. Lark was maimed for loving a man and interrupting his procreation. Together, they represent how both sexes can be judged, persecuted, and punished. As Lark reflects on his life, he says, “They didn’t take everything from me. A lot, but not everything” (181). Though they have both been stripped of so much, what qualities do they get to keep? In their short time together, what do these two characters teach each other?

14. From the very beginning of her exile, Ada is set on a path towards self-discovery. She risks everything for the chance to meet Mrs. Alice Schaeffer and yet, when she arrives, the center is abandoned. At the end of the novel, Ada resurrects the laboratory and begins her new life as a physician and advocate. Discuss your reactions to the novel’s ending. Has Ada regained what she had lost? How do you imagine that her contributions to medicine are influenced by her history? Sitting in jail, she exclaims, “How can I not hate what I am, if this is what it’s brought me?” (184). In your opinion, does Ada finish the novel with a change of heart?

Recommended Reading:
Betty by Tiffany McDaniel; Jack by Marilynne Robinson; The New Wilderness by Diane Cook; Fifty Words for Rain by Asha Lemmie; Upright Women Wanted by Sarah Gailey; The Handmaid’s Tale by Margaret Atwood; The Power by Naomi Alderman; Future Home of the Living God by Louise Erdrich; How Much of These Hills Is Gold by C. Pam Zhang