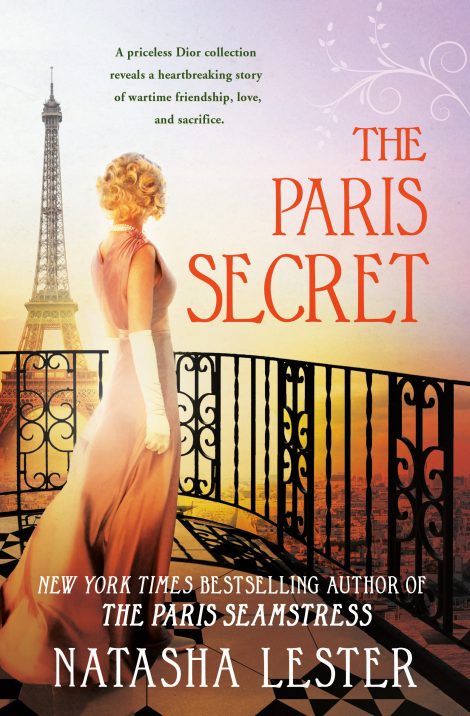 From the New York Times bestselling author of The Paris Orphan comes an unforgettable historical novel about a secret collection of Dior gowns that ties back to the first female pilots of WWII and a heartbreaking story of love and sacrifice.

England, 1939: The Penrose sisters couldn’t be more different. Skye is a daring and brash pilot, and Liberty the one to defy her at every turn. Even if women aren’t allowed in the Royal Air Force, Skye is determined to help the war effort. She’s thrilled when it reunites her with her childhood soulmate,

From the New York Times bestselling author of The Paris Orphan comes an unforgettable historical novel about a secret collection of Dior gowns that ties back to the first female pilots of WWII and a heartbreaking story of love and sacrifice.

England, 1939: The Penrose sisters couldn’t be more different. Skye is a daring and brash pilot, and Liberty the one to defy her at every turn. Even if women aren’t allowed in the Royal Air Force, Skye is determined to help the war effort. She’s thrilled when it reunites her with her childhood soulmate, Nicholas. She’s less thrilled to learn Nicholas is now engaged to an enigmatic Frenchwoman named Margaux Jourdan.

Paris, 1947: Designer Christian Dior unveils his glamorous first collection to a world weary of war and grief. He names his debut fragrance Miss Dior in tribute to his beloved sister Catherine, who forged a friendship with Skye and Margaux through her work with the French Resistance.

Present Day: Fashion conservator Kat Jourdan discovers a priceless collection of Dior gowns in her grandmother’s vacant cottage. As she delves into the mystery of their origin, Kat begins to doubt everything she thought she knew about her beloved grandmother. 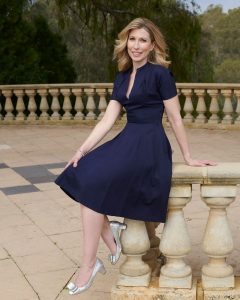 Natasha Lester worked as a marketing executive for L’Oreal before penning the New York Times and internationally bestselling novel The Paris Orphan. She is also the author of the USA Today bestseller The Paris Seamstress. When she’s not writing, she loves collecting vintage fashion, traveling, reading, practicing yoga and playing with her three children. Natasha lives in Perth, Western Australia.

“Best-selling Lester (The Paris Orphan, 2019) effectively finesses multiple timelines in her latest sweeping family saga written in elegant, evocative prose that is as carefully stitched together as a couture gown. Her meticulous attention to period details, impeccable plotting, and rich characterization will delight fans of Kate Morton or anyone in need of a gorgeously wrought, old-fashioned (in the best possible way, with echoes of Rosamunde Pilcher’s The Shell Seekers) tale of love, loss, courage, and compassion.” –Booklist, starred review

“Lester is a master storyteller. In only the way Lester can do it, these seemingly unlinked stories come together in a gorgeously satisfying way that will have you wiping tears from your face in the final pages.” ―The Daily Telegraph

“A stirring portrait of a daring and courageous group of women willing to risk it all in a time of war, The Paris Secret is historical fiction at its best. A beautiful love story coupled with an intricate mystery, richly detailed and impeccably researched history, and an homage to the strength of the human spirit makes this a poignant and powerful read. Natasha Lester has done it again!” ―Chanel Cleeton, New York Times Bestselling Author of The Last Train to Key West

Note that these questions might contain some plot spoilers.

1. Had you heard of the Air Transport Auxiliary and the women who worked for that organization before you read this book? Which of their experiences in dealing with the RAF and the male establishment did you find the most deplorable?

2. Why do you think women like Catherine Dior have been forgotten by history? Is it due to their gender, their reticence to speak about their wartime experiences, the nature of the savagery they endured, or other factors? What can we do to make sure the heroines of today aren’t similarly forgotten in the future?

3. How much did you know about Ravensbrück, Hitler’s concentration camp for women, before you read The Paris Secret? How difficult was this part of the book for you to read, and do you think the author achieved her aim of bringing to light the injustices and terrible acts committed against women in the camp? Why do you think the Nazis established a concentration camp solely for women?

4. Did Skye and Liberty do the “right” thing after the war? Can you understand why neither was in touch with the other afterward? How might things have changed if they had tried harder to find each other? Is pretending to be someone else ever acceptable, and what did you think of their actions after the war?

5. How would the book have been different if it had been told from Liberty’s point of view? In what way would the childhood sections of the book have changed? What did you think of Liberty and did this perception alter as the book progressed? Would you have liked to have seen more from the perspective of any other character?

6. Take a look on the internet and see if you can find pictures of the Dior gowns referenced in The Paris Secret. Do you have a favorite? If you do, why do you think the author chose that particular dress for that particular moment in the book? Can fashion be art, and can it, as Margaux says, restore and revive the spirits? Can it have any meaning beyond providing protective covering, or is fashion merely frivolous?

New York Times bestselling author Natasha Lester is known for her engrossing historical novels that include delectable details about the period’s fashion.  Her research has taken her from her home in Western Australia to Paris for tours of couture ateliers and the Museum of Art and Design to New York City to see the Dior exhibit at The Met and explore the Garment District.  In Sydney’s Powerhouse Museum, Natasha met with a fashion conservator to see some vintage Dior dresses up close–and learn more about the profession of preserving these exquisite garments.

Here, Natasha shares the inside details on five of the gorgeous Dior dresses that feature in her newest book, The Paris Secret.