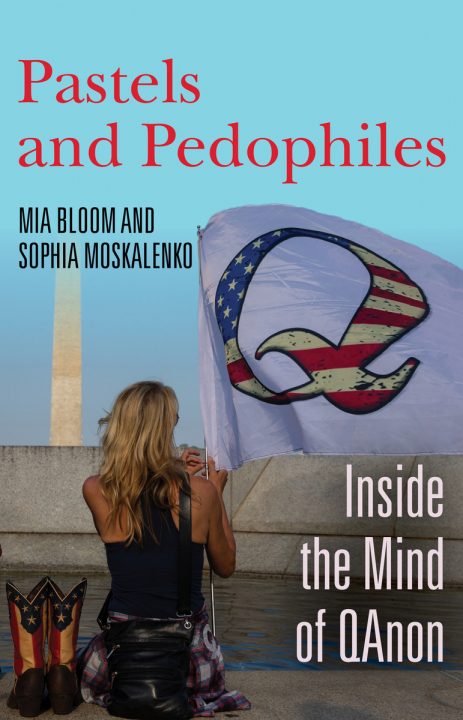 Inside the Mind of QAnon

Two experts of extremist radicalization take us down the QAnon rabbit hole, exposing how the conspiracy theory ensnared countless Americans, and show us a way back to sanity.

In January 2021, thousands descended on the U.S. Capitol to aid President Donald Trump in combating a shadowy cabal of Satan-worshipping pedophiles. Two women were among those who died that day. They, like millions of Americans, believed that a mysterious insider known as “Q” is exposing a vast deep-state conspiracy. The QAnon conspiracy theory has ensnared many women, who identify as members of “pastel QAnon,” answering the call to “save the children.”

Two experts of extremist radicalization take us down the QAnon rabbit hole, exposing how the conspiracy theory ensnared countless Americans, and show us a way back to sanity.

In January 2021, thousands descended on the U.S. Capitol to aid President Donald Trump in combating a shadowy cabal of Satan-worshipping pedophiles. Two women were among those who died that day. They, like millions of Americans, believed that a mysterious insider known as “Q” is exposing a vast deep-state conspiracy. The QAnon conspiracy theory has ensnared many women, who identify as members of “pastel QAnon,” answering the call to “save the children.”

With Pastels and Pedophiles, Mia Bloom and Sophia Moskalenko explain why the rise of QAnon should not surprise us: believers have been manipulated to follow the baseless conspiracy. The authors track QAnon’s unexpected leap from the darkest corners of the Internet to the filtered glow of yogi-mama Instagram, a frenzy fed by the COVID-19 pandemic that supercharged conspiracy theories and spurred a fresh wave of Q-inspired violence.

Pastels and Pedophiles connects the dots for readers, showing how a conspiracy theory with its roots in centuries-old anti-Semitic hate has adapted to encompass local grievances and has metastasized around the globe—appealing to a wide range of alienated people who feel that something is not quite right in the world around them. While QAnon claims to hate Hollywood, the book demonstrates how much of Q’s mythology is ripped from movie and television plot lines.

Finally, Pastels and Pedophiles lays out what can be done about QAnon’s corrosive effect on society, to bring Q followers out of the rabbit hole and back into the light.

Mia Bloom is the International Security Fellow at New America, professor at Georgia State University, and member of the Evidence-Based Cybersecurity Research Group. She has authored books on violent extremism including Small Arms: Children and Terrorism (2019), Bombshell: Women and Terrorism (2011), and Dying to Kill: The Allure of Suicide Terror (2005).

Sophia Moskalenko is a psychologist studying mass identity, inter-group conflict, and conspiracy theories. She has written several books, including the award-winning Friction: How Conflict Radicalizes Them and Us (2011) and The Marvel of Martyrdom: The Power of Self-Sacrifice in the Selfish World (2019).

1. What has facilitated the growth of QAnon believers since 2019? Why do you think 37% of Americans are unsure of whether the theory’s allegations are completely false?

2. If, as the authors note in Chapter 1, “most followers of QAnon don’t necessarily care who [Q] actually is,” why does discovering Q’s identity matter? Do you believe this revelation would help to unravel QAnon? How?

3. What is it that makes conspiracy believers persist in their beliefs, even when their evidence is openly disproved?

4. As Bloom and Moskalenko discuss the indoctrination of women into the QAnon conspiracy, several connections to cult and terrorist groups are insinuated. What distinguishes QAnon from these types of groups?

5. Why do we generally assume women are less violent or radical than men? How does this belief affect how we perceive and react to women in groups like that of QAnon?

6. In Chapter 2, we learn that factors like “widespread distrust of authority, anger at powerful figures in politics…and growing income inequality” can make people susceptible to conspiracy theories. How can we heal this anger and mistrust in our country, communities, and personal lives?

7. The state of ‘unfreezing’, in which unfortunate circumstances suddenly separate an individual from their communities and previous purpose, can happen to anyone, setting the unfrozen individual on a quest to find a new direction and community. How have you reacted to moments of ‘unfreezing’ in your life?

8. Bloom and Moskalenko note that shifting ideas of gender and its correlated roles have “cracked” the worldview of many Americans, particularly that of women. What can we do to help people adjust to these types of changes more smoothly?

10. How can the attitude inoculation approach suggested in Chapter 4 be applied to your own life?

The screen is dark with eerie music playing in the background. The music reaches a crescendo, and a flaming Q appears as a deep voice reveals, “8 million children are missing!” According to the video, the children are being bred specifically for their blood and body parts, they are missing birth certificates so there is no way to trace them, and our (U.S.) government is doing nothing about it—in fact they are participating in the blood lust. The only person on the planet, who can save the children, is Donald John Trump.1

Welcome to the universe of QAnon.

QAnon is a baseless conspiracy theory from the darkest underbelly of the Internet. Named after the Department of Energy’s highest level of security clearance, a Q clearance is related to access to nuclear weapons’ designs but not to other national security concerns.2 The conspiracy theory conceives that former President Trump is fighting a battle against a “deep-state” cabal of Democratic saboteurs who worship Satan and traffic children for sex or for their blood.3

QAnon burst onto the scene in October 2017 with predictions that the National Guard was about to arrest Hillary Clinton. On October 28, an anonymous user browsing the /pol/section of 4chan, a notorious alt-right imageboard, saw a post that read, “Hillary Clinton will be arrested between 7:45 AM—8:30 AM EST on Monday—the morning on Oct 30, 2017.” This user would later adopt the name “Q Clearance Patriot” (shortened to “Q”). Q hinted that they were a military officer in former President Trump’s inner circle; their writings—almost 5,000—gave birth to the QAnon conspiracy theory.4

As QAnon evolved, it moved from 4chan to other social media platforms, and its messages spread to Facebook, Instagram, Parler, TikTok, and even to Nextdoor and Peloton. In a short four years, QAnon metastasized from a fringe movement on anonymous message boards into a cultlike movement, with millions of followers around the world—one that has captured the imagination and practically seized control of the Republican Party.6 More surprisingly, it has ensnared many women, causing incalculable damage to families and resulted in murders, kidnappings, and intense partisanship in U.S. politics, as you will read in this book.

There were 97 QAnon-supporting candidates in the 2020 primaries, of which 22 Republicans and 2 Independents were victorious and ran in the November 2020 elections. In 2021 a freshman senator from Georgia was removed from her committee assignments; a second freshman senator from Colorado is being investigated for aiding and abetting a failed coup. And, instead of shunning the baseless conspiracy, the Republican Party appears to have embraced it. Statistics show a steady climb in the percentage of QAnon believers in the United States from 5 percent in 20197 to 10 percent in 2020 to 17 percent in February 2021. An NPR/Ipsos poll revealed 17 percent of Americans believe a group of Satan-worshipping, child-enslaving elites want to control the world. Equally disturbing is that another 37 percent aren’t sure whether the allegations are completely false.8

QAnon followers come from all walks of life—they are liberals, conservatives, PhDs, lawyers, doctors. There are highly educated people that fall into these movements and it is dangerous and remiss to pigeon-hole QAnon followers according to educational attainment or social status.9

Marc-André Argentino, a PhD candidate from Montreal who studies the conspiracy, criticized the Democratic National Committee when they launched a $500,000 ad campaign in February 2021 that offered the GOP a choice between being “the party of QAnon or appealing to college educated voters.” Argentino insisted that QAnon comprises people of all educational levels, and he railed on Twitter: “Can we stop saying these are uneducated people, that they are crazy and wear tinfoil hats?”10

The increasing number of people who believe in QAnon and the range of socioeconomic and educational strata to which it appeals mean that it is highly likely someone in your family or among your friends believes that QAnon is real.

What is QAnon? Why do ordinarily sane people believe something so outrageous? How did we get here? And can we fix the problem?

This book seeks to answer all of these questions. We examine the possible identity of Q, trace the origins of QAnon to long-entrenched anti-Semitic tropes, explore why women have been especially vulnerable to QAnon, and explain psychologically how Q has managed to take root in the U.S. body politic.

7. Will Sommer, “Inside the Completely Nutso Universe of QAnon: An Explainer for the Conspiracy Theory That’s Taking over the GOP,” Daily Beast (August 21, 2020). https://www.thedailybeast.com/what-is-qanon-a-deep- look-inside-the-nutso-conspiracy-theory-infecting-our-politics