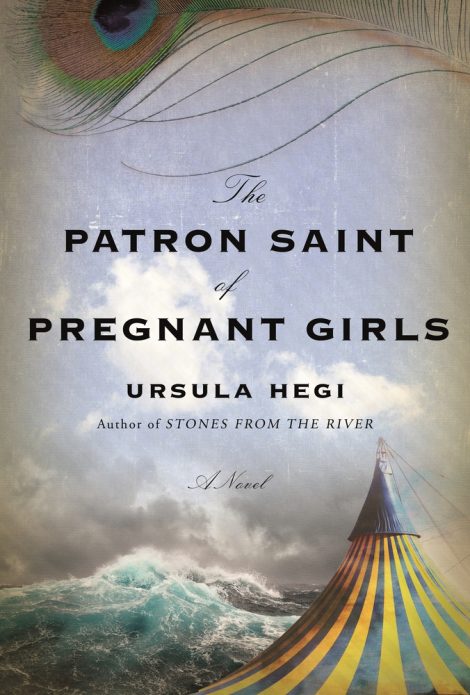 THE PATRON SAINT OF PREGNANT GIRLS

From beloved bestselling author Ursula Hegi, a new novel about three mothers, set on the shores of the Nordsee, perfect for fans of Water for Elephants and The Light Between Oceans.

In the summer of 1878, the Ludwig Zirkus arrives on Nordstrand in Germany, to the delight of the island’s people. But after the show, a Hundred-Year Wave roars from the Nordsee and claims three young children.

Three mothers are on the beach when it happens: Lotte, whose children are lost; Sabine, a Zirkus seamstress with her grown daughter;

From beloved bestselling author Ursula Hegi, a new novel about three mothers, set on the shores of the Nordsee, perfect for fans of Water for Elephants and The Light Between Oceans.

In the summer of 1878, the Ludwig Zirkus arrives on Nordstrand in Germany, to the delight of the island’s people. But after the show, a Hundred-Year Wave roars from the Nordsee and claims three young children.

Three mothers are on the beach when it happens: Lotte, whose children are lost; Sabine, a Zirkus seamstress with her grown daughter; and Tilli, just a girl herself, who will give birth later that day at St. Margaret’s Home for Pregnant Girls. After the tragedy, Lotte’s husband escapes with the Zirkus, while she loses the will to care for their surviving son. Tilli steps in, bonding with him in a way she isn’t allowed to with her own baby, taken away at birth. Sabine, struggling to keep her childlike daughter safe in the world, forms a complicated friendship with Lotte. But the mothers’ fragile trio is threatened when Lotte and her husband hatch a dangerous plan to reunite their family, and Tilli and Sabine must try to find a way to pull them back to reality.

As full of joy and beauty as it is of pain, and told with the luminous power that has made Ursula Hegi a beloved bestselling author for decades, The Patron Saint of Pregnant Girls is a shining testament to the ways in which women hold each other up in the most unexpected of circumstances.

Ursula Hegi is the author of over a dozen books, including Stones from the River, Children and Fire, Floating in My Mother’s Palm, and Tearing the Silence, and has received more than thirty grants and awards. She teaches in the Stony Brook MFA program and lives with her family on Long Island.

“Mesmerizing…Hegi’s command of the plot and ability to render poignant characters create a satisfyingly emotional story. Hegi’s fans and devotees of literary fiction will treasure this.” —Publishers Weekly

“Compassionately observant…The offbeat characters enhance the quasi-dreamlike effect, but the scenarios they face are starkly real…Their emotional hardships are satisfyingly leavened by softer moments of romantic and familial love.” —Booklist

“[Hegi is] a writer at the height of her powers. I can’t think of a better way to ‘endorse’ a novel than to say I will be gifting it to my book-loving friends and family—a gift, mind you, not a loan, as I want this title in my keeper bookshelf. As in a circus after a particularly riveting performance, The Patron Saint of Pregnant Girls deserves a thunderous round of applause.” —Julia Alvarez, author of In the Time of the Butterflies and Afterlife

“The Patron Saint of Pregnant Girls is a novel full of marvels—children with missing fathers, girls too young to be mothers, nuns who cherish their charges, circus acrobats, the beautiful northern light—but the greatest marvel is Ursula Hegi’s shimmering, radiant, vivid prose. Her characters, and their lives full of love and longing, leap off the page and into the reader’s heart.” —Margot Livesey, author of Mercury and The Flight of Gemma Hardy

With each pregnancy Lotte and the toymaker introduce their unborn to the sea, Lotte with her belly taut, Kalle with his hands on her hips as he guides her in to the peak of her belly. Eyes shut with bliss, with reverie, Lotte feels her baby swim, the wall of her body separating it from the Nordsee. First Hannelore. Then Martin. Then Bärbel. During her fourth pregnancy Lotte gets playful and dives into a handstand, surprises herself and the toymaker who laughs aloud, faced with her feet wiggling above the surface of the sea; but as he reaches down to steady her, one hand on her belly, the other on her buttocks, he’s the one who needs steadying because Lotte shoots up, spews water at him, clamps her legs around his middle. Tilts herself to him.

When you grow up by the edge of the Nordsee, you respect it, know it like the rise and fall of your breath. It begins when you learn to swim before you can walk, plunge below a wave and dig your tiny fingers into the silt before a wave can scramble you. Hannelore is daring that way, exuberant in the water like her mother, Lotte, while Martin is cautious. Too early to know with Bärbel who’s two that August of 1878 when a freak wave heaves itself at Nordstrand. A hundred-year wave, the Old Women say. Not that Lotte Jansen miscalculated the tides. Vacationers may drown, foolish enough to walk out too far on the wet sand and get cut off by the surge of incoming tide; if locals die by water, it’s in a storm or when a fishing boat capsizes.

This hundred-year wave will enter legend, define Nordstrand as much as the people who tell and retell the story, who consider themselves witnesses—not only those who see Lotte and her children dance and play in the tidal shallows on their way home after the Zirkus performance—but others who’ll hear about it later and yet speak of it as if they were with Lotte just before all wind ceases and the sky fades from blue to yellow, blotting the sun. In these stories—memories, the Old Women insist—Lotte carries her fourth baby, Wilhelm, on one hip; her daughters wear smocked dresses and Martin his lederhosen as they chase the retreating tide, laughing, running back ashore and out again, until Lotte offers her free hand to link her children to each other. And to her.

“How free can a mother’s hand be if she has children hanging from it?”

But you refuse to envision your own children ripped from you. Your grandchildren. Aloud, you wonder why God has punished Lotte and Kalle Jansen without mercy. Because they copulated before marriage? But then you’d all be going under with sin.

“Let’s put our feet in the water…” Lotte sings to her children, “… this is the sun’s water.”

Who of you hasn’t let the sun’s water lick your ankles, your calves? You know what that’s like. You also know what it’s like to go under while you play in the Nordsee as children or swim out far as adults; and you give your memories to Lotte Jansen as you describe how the wave slams into her, fills her mouth and her nose, stings her eyes. And in that one moment all you see and recall and imagine fuses, poised to grow and enter legend.

Legends, the Old Women know, are ancient gossip; yet not all gossip leads to legends. By itself gossip won’t last, but legends feed on gossip. The Old Women know if you have a hangnail. If your great-great-grandparents cheated on each other. If you burn your soup. If you carry hate in your dreams.

After the freak wave recedes, people fan across the Watt to search for the children—nuns and Zirkus people and toymakers and fishermen and shopkeepers and church people and Old Women and farmers and blacksmiths and big-bellied Girls from the St. Margaret Home for Pregnant Girls—a bizarre crowd hoping to outwit death. Some on Zirkus ponies or horses, water sloshing around the hooves. Some in carriages. Most on foot.

“We’ll find them,” Kalle vows to Lotte who clutches their youngest against her shoulder.

“We taught them to swim…”

“Before they could walk.”

Heike from the Zirkus runs toward Lotte, white-blond hair flitting around her face, satin skirt flapping high. Heike, just six years younger than Lotte. Body of a woman, mind of a child.

But Heike outruns her, in her fist crepe poppies, gaudy and smelling of barn. When she thrusts the poppies at Lotte, Wilhelm squirms for the red that quivers before him till Heike’s mother steps into the red. Blots it.

“Oh, Lotte…” Gently, Sabine wipes mud from Lotte’s face, tucks wet tangles of hair behind her ears. She’s been part of Lotte’s summers since Lotte was five and visited Sabine’s Zirkus wagon and was allowed to hold her new baby, Heike.

Sabine loops her arms around Lotte. Steadies her and the baby. “I can hold him.”

Lotte shakes her head. “No.”

“I’ll do anything for you.”

“Where is Hannelore?” Heike stomps her feet.

Lotte used to think how devastating it must be for Sabine to raise such a child. But now—she shivers.

“We don’t know,” Sabine tells her daughter. “Not yet.”

She loves to play with local children wherever the Ludwig Zirkus sets up for a week, especially on Nordstrand where Hannelore is her best friend. Hannelore adores her. Hannelore can sit so still that she’s allowed to watch Heike rehearse her cello with the Zirkus orchestra.

“But where is Hannelore?”

Hannelore. And everyone searching for her and Bärbel and Martin, rushing and returning and setting out again, while Lotte stands rooted in prayer and drenched clothes, Wilhelm locked into her arms. Sun drenches the clouds with crimson that leaks through crevices, fighting the gray. When the incoming tide forces the searchers from the Watt, they run for their boats. A few stay in the deep, diving. Kalle leaps into the dory of the beekeeper who lunges for the oars, arms silver with pale hairs, like a god who will go beneath the sea to bring back your children.