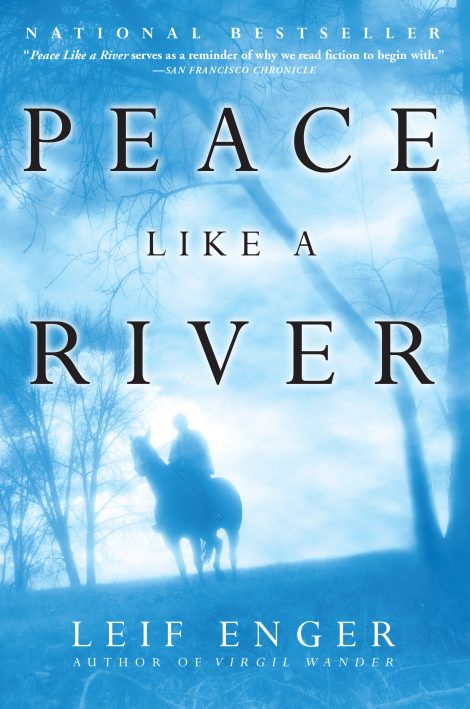 In “lyrical, openhearted prose” (Michael Glitz, The New York Post), Enger tells the story of eleven-year-old Reuben Land, an asthmatic boy who has reason to believe in miracles. Along with his sister and father, Reuben finds himself on a cross-country search for his outlaw older brother who has been controversially charged with murder. Their journey is touched by serendipity and the kindness of strangers, and its remarkable conclusion shows how family, love, and faith can stand up to the most terrifying of enemies, the most tragic of fates. Leif Enger’s “miraculous” (Valerie Ryan, The Seattle Times) novel is a “perfect book for an anxious time,

In “lyrical, openhearted prose” (Michael Glitz, The New York Post), Enger tells the story of eleven-year-old Reuben Land, an asthmatic boy who has reason to believe in miracles. Along with his sister and father, Reuben finds himself on a cross-country search for his outlaw older brother who has been controversially charged with murder. Their journey is touched by serendipity and the kindness of strangers, and its remarkable conclusion shows how family, love, and faith can stand up to the most terrifying of enemies, the most tragic of fates. Leif Enger’s “miraculous” (Valerie Ryan, The Seattle Times) novel is a “perfect book for an anxious time, a book of great literary merit that nonetheless restores readers’ faith in the kindness of stories” (Marta Salij, Detroit Free Press).

Leif Enger was raised in Osakis, Minnesota, and has worked as a reporter and producer for Minnesota Public Radio since 1984. He lives on a farm in Minnesota with his wife and two sons.

“You don’t see novels like this one very often. Peace Like a River reminds a reader of Kent Haruf’s Plainsong or even Norman MacLean’s A River Runs Through It. It’s got that pure American loss of innocence theme, that belief in and fascination with miracles, that insistence on the goodness of men outside of the law.” —Susan Salter Reynolds, Los Angeles Times Book Review

“Book lovers inclined to complain that novelists don’t write gripping yarns anymore would do well to pick up a copy of Peace Like a River, a compelling blend of traditional and artfully offbeat storytelling…a miracle well worth witnessing… Grade: A.” —Amanda Heller, The Boston Globe

“The Lands are such a fascinating family that they could easily populate a memorable book even with no plot to speak of. Swede…may be literature’s most unforgettable little girl since Scout in To Kill a Mockingbird.” —Gail Pennington, The St. Louis Post-Dispatch

“If you like a ripping good story told in robust prose that gives you goose bumps, latch onto this book…More than a novel of miracles, it is truly a miraculous novel.” —Valerie Ryan, The Seattle Times

1. As the novel begins—indeed, as the very life of this novel’s narrator begins—a miracle happens. Describe it. How does it happen? Who accomplishes it? Begin your discussion of this book by recounting the major and minor miracles that occur throughout. What role do they play in Peace Like a River?

2. Born with a severe case of asthma, Reuben Land, our young hero and narrator, must often struggle to bring air into his lungs. Throughout the book, Reuben is preoccupied with his own breathing, and the act of breathing functions in this story as a metaphor for life itself. How does Reuben cope with his ailment, and how is his character influenced by it? Provide instances where breathing takes on special meaning in the narrative.

3. Consider the details of the double homicide committed by Davy, Reuben’s older brother. Does Reuben see Davy as a murderer, or as one who acted in self-defense? Does he want Davy brought to justice, or does he think justice has already been served? What about the other main characters: how do they feel? And what about you, the reader? How was your impression of Davy—and of this novel—influenced by his actions? Discuss how the novel explores the idea of loyalty.

4. Peace Like a River is set mainly in rural Minnesota and the Badlands of North Dakota during the early 1960s. Like early American pioneers, or perhaps like mythic heroes, the Lands set out to rescue one of their own amidst the beauty and cruelty of the natural world. How does the Land family contend with this raw, uncivilized, and sometimes brutal landscape? Identify events or circumstances in which the novel’s setting contributes to its elemental or mythic quality.

5. Swede, Reuben’s imaginative, prolific, and precocious younger sister, creates an epic poem about a cowboy named Sunny Sundown. Talk about Sunny’s ongoing saga as an ironic commentary on Reuben’s larger narrative. What are the parallels?

6. Besides the Sunny Sundown text, several other outlaw tales, literary allusions, biblical legends, and historical asides are offered—by Swede or by Reuben himself. Identify a few of these stories-within-the-story, explaining how each enriches or influences the main narrative.

7. Discuss the character of Jeremiah Land, Reuben’s father—and the center of his moral compass. What are Jeremiah’s strengths, as a person and a parent? Does he have any weaknesses? Why did his wife leave him, all those years ago? And why does he “heal” the grotesque employer who fires him (p. 80)? Explain how the novel’s dual themes of familial love and ardent faith are met in this character.

8. Both during Davy’s trial and after his escape from prison, we encounter a variety of public viewpoints on what Reuben’s brother has done. Such viewpoints, usually presented as personal letters or newspaper editorials, are always steadfast yet often contradictory. What does Reuben seem to realize about the so-called “court of public opinion,” in light of these viewpoints?

9. Prayer is described in many ways, and on many occasions, in Peace Like a River. Reading this book, did you discover anything about the activity of, reasons for, or consequences of prayer? What larger points—about religion and human nature, say—might the author be making with his varied depictions of people at prayer? For instance, when remembering a prayer he said that included blessings for even his enemies, Reuben comments thus regarding Jape Waltzer: “Later I would wish I’d spent more time on him particularly” (p. 285). Why does Reuben feel this way? What power does he recognize in his own prayers? Discuss the impact prayer has on Reuben, and how it transforms him.

10. Recovering from a near-fatal asthmatic collapse, Reuben muses: “The infirm wait always, and know it” (p. 290). Given Reuben’s physical condition, and given what we know about his ancestry and the story at hand, what is Reuben “waiting” for? How is his waiting resolved? Can this analogy be applied to any of the other characters?

11. The final miracle in Peace Like a River occurs, of course, when Jeremiah surrenders his life for Reuben. But why, at an earlier point in the story, does Reuben observe, “Since arriving at [Roxanna’s] house, we’d had no miracles whatever” (p. 257). Discuss the truth and falsehood of this remark. How might Roxanna herself be seen as a miracle?

12. What does the character of Roxanna bring to the Land family? What does she provide that the Lands had lacked before her arrival? Over the course of the novel, Reuben’s attitude and his physical descriptions of Roxanna change. In what ways does it change, do you think Roxanna’s attitudes toward the Lands as a family and Jeremiah as a person undergo a similar metamorphosis?

13. In “Be Jubilant, My Feet,” the next-to-last chapter, Reuben and Jeremiah enter a world beyond this one. “Here in the orchard,” our hero recalls, “I had a glimmer of origin: Adam, I thought” (p. 301). Where exactly are Reuben and his father? What happens to them? How have these crucial events been foreshadowed, and how are they new or unprecedented?

14. Much of this novel concerns the inner life of childhood: imagination, storytelling, chores, play, and school life. Discuss the author’s portrayal of childhood. Do the children depicted here seem realistic? Why or why not?

15. Remembering his own childhood, author Leif Enger recently noted: “I grew up squinting from the backseat at gently rolling hills and true flatlands, where you could top a rise and see a tractor raising dust three miles away. So much world and sky is visible, it’s hard to put much stock in your own influence.” Does this type of relationship between the individual and the natural world appear in Peace Like a River? If so, where? Identify key passages or scenes where the characters seem inferior to the landscape, or even at the mercy of it

16. Finishing his story, Reuben notes: “You should know that Jape Waltzer proved as uncatchable as Swede’s own Valdez” (p. 309). What do the characters of Jape and Valdez represent in this novel? Conclude your discussion by comparing and contrasting Peace Like a River with the traditional morality play—the symbolic drama (dating back to medieval times) based on the eternal struggle between Good and Evil.