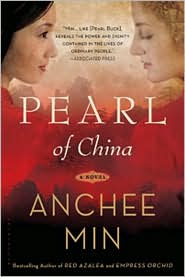 From the bestselling author of Red Azalea and Empress Orchid comes the poignant story of the friendship of a lifetime, based on the life of Pearl S. Buck.

Willow never dreamed that her childhood friend would become a world-renowned writer. In the impoverished Chinese village of Chin-kiang, a young pickpocket meets her match in Pearl Sydenstricker, the daughter of the village’s only white man, a Christian missionary named Absalom. Willow and her Papa befriend Pearl’s family to get a hot meal, but eventually Papa and Absalom become partners in recruiting the villagers to join the church.

From the bestselling author of Red Azalea and Empress Orchid comes the poignant story of the friendship of a lifetime, based on the life of Pearl S. Buck.

Willow never dreamed that her childhood friend would become a world-renowned writer. In the impoverished Chinese village of Chin-kiang, a young pickpocket meets her match in Pearl Sydenstricker, the daughter of the village’s only white man, a Christian missionary named Absalom. Willow and her Papa befriend Pearl’s family to get a hot meal, but eventually Papa and Absalom become partners in recruiting the villagers to join the church. Meanwhile, Willow and Pearl strike up a friendship that will last a lifetime. As Willow and Pearl come of age, their lives diverge: Willow is forced to become a concubine, and Pearl leaves Chin-kiang to study in Shanghai and America. When Pearl returns to the village, it is to marry Lossing Buck, an ambitious American agriculturist.

As Willow and Pearl struggle with unhappy marriages, political unrest drives them out of Chin-kiang. The women reunite in Nanking, where Pearl begins writing fiction, determined to bring stories of the Chinese people to Western readers. Her talents draw the attention of Hsu Chih-mo, China’s preeminent poet, but the writers’ love affair is cut tragically short.

As Mao and his Communist Party take over the country, Pearl is exiled to America, never to return to her true home of China. And although Willow pays a steep price for her connection to the Western writer, she remains true to her friendship and her values.

Pearl of China brings new color to the remarkable life of Pearl S. Buck, illuminated by the sweep of history and an intimate, unforgettable friendship.

Anchee Min was born in Shanghai in 1957. During the Cultural Revolution, she was ordered to denounce Pearl S. Buck as an American imperialist. At seventeen, Min was sent to a labor collective, where a talent scout for Madame Mao’s Shanghai Film Studio recruited her to work as an actress in propaganda films. Min moved to the United States in 1984. Her first book, the memoir Red Azalea, became an international bestseller. She has also published five previous novels: Empress Orchid and The Last Empress, set during the last years of Imperial China; and Katherine, Becoming Madame Mao, and Wild Ginger, set during the Cultural Revolution and its aftermath. Her books have been translated into thirty-two languages.

“[Anchee] Min, a prime example of an indomitable Chinese woman, has made it her mission to reveal the truth about the lives of women in China, including Madame Mae, Empress Tzu Hsi, and now Buck … Ardently detailed, dramatic, and encompassing, Min’s fresh and penetrating interpretation of Pearl S. Buck’s extraordinary life delivers profound psychological, spiritual, and historical insights within an unforgettable cross-cultural story of a quest for veracity, compassion, and justice.”—Booklist (starred review)

“In those moments, when human emotions transcend cultural and geographical borders, Min echoes Buck’s talent for showing compassion and empathy toward her characters, and like her, reveals the power and dignity contained in the lives of ordinary people.”—Associated Press

“Pearl of China is a loving tribute to Buck and a unique peek into the hearts and lives of the Chinese people who knew her. As with all of her books, Min—like Buck before her—exposes the cruel, isolating existence that China’s rulers inflicted on much of the country’s population during the different decades that the two women lived there. And both women showed the inspiring, courageous ways in which even the most besieged of the lowest classes maintained their wit and humanity.”—Oregonian

“Pearl of China is worthy of reading simply because of the author’s ambition of showing how literature can affect history as well as the psyche.”—Asian Review of Books

Pearl of China opens with a quotation from Pearl S. Buck: “I was never deceived by Chinese women, not even by the flower-like lovely girls. They are the strongest women in the world.” Discuss how two strong-willed characters in Pearl of China, Willow and Madame Mao, display the fortitude that Buck describes. How are these two women’s strengths similar and different? Who benefits—and who suffers—from these two women’s powers?

Describe the changing fortune of Willow’s family. When we first meet Willow, how is her family coping with poverty? How do their fortunes change over the course of the novel? How does Willow’s peasant background eventually become an advantage?

Although Pearl is American, “beneath her skin, she was Chinese.” (263) What Chinese qualities does Pearl exhibit in childhood and in adulthood? What American characteristics does she have? How is Pearl able to reconcile her Chinese heritage and her Western birth?

Compare the relationships Pearl and Willow have with their fathers. What troubles does each girl have with her father? How does the relationship between Pearl and Absalom change over the course of the novel, and what difficulties between them are never resolved?

Absalom’s church in Chin-kiang weathers many changes. How do Papa and Carpenter Chan attempt to reconcile Christian and Chinese traditions? What strategies seem most successful in attracting new members to the church? How does Absalom react to these changes? How does the church endure and evolve after Absalom’s death?

Willow loves two musical works: the Chinese opera The Butterfly Lovers and the Christian hymn “Amazing Grace.” When does she first encounter each work? What impact does each have upon her life?

Discuss the love triangle of Willow, Pearl, and Hsu Chih-mo. How does the poet come between the two women friends? How does Willow react to Pearl and Hsu Chi-Mo’s affair at first? Does she seem to fully recover from this heartbreak after Hsu Chih-mo’s death? Why or why not?

Both Papa and Willow are subjected to torture due to their friendships with Absalom and Pearl. Why does Papa betray Absalom when Bumpkin Emperor and the Nationalists torture him? How does Willow withstand Madame Mao’s imprisonment?

Marital problems plague many characters in Pearl of China. Consider the following troubled couples: Absalom and Carie, Pearl and Lossing, Willow and Dick. What do these marriages have in common, and how are they different? What better models of love and coupling exist within the novel?

Discuss the theme of forgiveness in Pearl of China. When are Papa, Dick, and Bumpkin Emperor forgiven, and why? What friendships and values are strengthened through forgiveness? Which characters have difficulty forgiving others’ transgressions, and why?

As she begins to write novels, Pearl tells Willow, “The character must believe in himself, and he must have the stamina to endure.” (113) Does Willow display the courage that Pearl describes? What hardships is Willow able to endure? At which moments is her belief in herself especially challenged?

Describe Dick’s relationship with Mao and Communism. How does Dick demonstrate his loyalty to Mao’s cause? When is Dick’s loyalty challenged, and how does he react? Why does Mao decline to protect Dick from Madame Mao? What regrets does Dick express on his deathbed, and how does Willow react to these confessions?

On her voyage to America, Willow pictures Pearl’s American home: “I imagined the rooms filled with tasteful furniture and decorated with Western art. Pearl would have a library, for she had always been a lover of books. I also imagined that she would have a garden. She had inherited Carie’s passion for nature. The garden would be filled with plants whose names I wouldn’t know, but it would be beautiful.” (261–62) What surprises does Willow discover when she finally sees Pearl’s home and garden? How do Pearl’s home, garden, and grave meet her expectations, and how do they defy her imagination?

If you have read The Good Earth, discuss similarities and differences between Buck’s novel and Min’s Pearl of China. How does each author portray the people, land, and troubles of rural China?