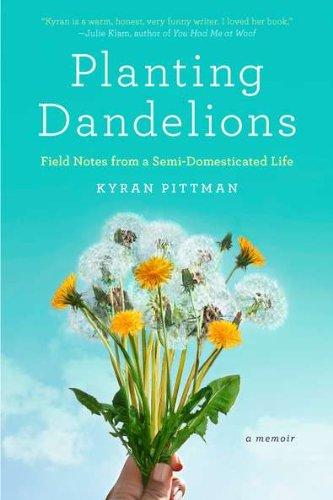 Field Notes From a Semi-Domesticated Life

Some people need to run away to find themselves. Some need to come home

Kyran Pittman did both, landing in the last place she ever expected: inside the white picket fence at the center of an all-American family. A self-described wild child, Pittman grew up in a loving yet chaotic household on the “near-mythical island” of Newfoundland, off Canada’s rugged east coast.

Unmoored by “the catastrophe of falling in love with an American,” she embarked on a new life as an unlikely pilgrim to the suburban heartland–a journey that began in exile and ends in homecoming.

Some people need to run away to find themselves. Some need to come home

Kyran Pittman did both, landing in the last place she ever expected: inside the white picket fence at the center of an all-American family. A self-described wild child, Pittman grew up in a loving yet chaotic household on the “near-mythical island” of Newfoundland, off Canada’s rugged east coast.

Unmoored by “the catastrophe of falling in love with an American,” she embarked on a new life as an unlikely pilgrim to the suburban heartland–a journey that began in exile and ends in homecoming.

Married, with three young sons, Pittman took up blogging as a way of journalling about her “semi-domestic” life. She expanded to a national print audience when her online musings were discovered by Good Housekeeping magazine, and when an epiphany in a supermarket checkout line led to her first feature article, Mommy Wears Prada.

Planting Dandelions is what Pittman describes as a “natural history of an American family,” a captivating set of field notes on the living habits of a small group of humans embedded deep in the heart of suburban America. In its eighteen linked, chronological essays, she observes everyday life from the center of the chaos, but with an outsider’s appreciation, wonder and amusement. This perspective isn’t surprising given her provenance.

The daughter of a charismatic yet troubled poet, Pittman’s childhood was as unconventional as it was unpredictable. In her twenties, she was led away from her home when an idle email correspondence quickly combusted into a year-long, continent-crossing, scorched-earth love affair. Ever her father’s daughter, Pittman followed her heart, deciding to leave her country, her family and a short-lived marriage based on a cumulative total of three days spent in the presence of her beloved. As great love stories go, it should have ended there. But Pittman married him, moved to his home state, and soon after gave birth to their first son. That’s when the real adventure began.

Her new life in suburban, landlocked Arkansas was a far cry from her island home and it could have sent her reeling. Instead, she learned to embrace domesticity as a novel and exotic adventure, blending in with her adopted culture “about as much as the dandelions on her lawn blend in with the grass, but with roots that dig down a little deeper each passing year.”

Kyran Pittman is often asked how she wound up in Arkansas. Her answer is that she still wakes up wondering the same thing. “Destiny” is not a word that comes to mind when one sees the suburban Little Rock home that Pittman shares with her husband and their three young sons.

Growing up in the seventies, in an unconventional, artistic home, on the “near-mythical” island of Newfoundland off Canada’s rugged east coast, Pittman was both in thrall to and suspicious of the white picket fence. Now that she dwells within its bounds, her outsider’s eye yields keen observations—as she puts it, she is a kind of domestic naturalist, embedded deep in the field.

In 2005, Pittman began recording those observations on a blog, eventually attracting the attention of Good Housekeeping, which reprinted several posts as short essays. When a grocery store check-out lane epiphany led to her first wildly popular feature article for the magazine, it was apparent that a resonant new voice in non-fiction had appeared.

In her vivid and intimate memoir, Planting Dandelions: Field Notes from a Semi-Domesticated Life, (Riverhead; May 2011), Pittman opens her front door and walks us through the first twelve years in the life of a family.

Describing the book as “an apronful of stories carried breathlessly up to the fence by that strange woman in town, me.” Pittman represents her experience in all its drama, humor and depth.

“Pittman’s voice is like that of a close girlfriend: warm, funny, conspiratorial, and up for talking about anything.”—Publishers Weekly

“She concocts a fine wine from the unruly weeds that bloom inside her white picket fence. Read Planting Dandelions. It’s a riotous and compelling glimpse of life after a perennial party girl crosses over to the other side.”—Globe & Mail

“Unlike reality television, by the end of this book, you’ll know that you were in the presence of a real woman.”—Marck Beggs, Blood, Dirt & Angels

In the introduction, the author argues that domestic life can be just as life-altering and awesome as more exotic experiences — that “the path that winds through the backyard, can be just as meaningful and wondrous as the one that goes up the mountaintop.” Do you agree? Do depictions of family life in popular culture tend to support or refute the author’s claim?

Kyran and Patrick’s love story begins while she is married to someone else, “a gentle and kind man,” whom she abandons, for life in a foreign county with a man she met on the internet. Did that revelation elicit judgment or empathy from you, initially? How do those circumstances color the author’s credibility in writing about marriage and commitment?

In describing pregnancy and child-rearing, the author grapples with romantic expectations about motherhood that are both cultural and self-inflicted. Eventually, she concludes that her children can be at the center of her life, without being “expected to occupy the whole of it.” Where do you see the distinction?

The chapter, “Ring of Fire,” describes a difficult period in Kyran and Patrick’s relationship, triggered by an unexpected pregnancy. “As hard as it was to stay in my marriage,” writes the author, “it seemed a whole lot harder to get out of it. That, right there, is the whole point of marriage as an institution.” She argues that the binding infrastructure of marriage is a good thing; that “there’s something to be said for sealing off the exits.” Do you agree with her? Do you think people tend to give up too soon in relationships, or do you feel life is too short to endure unhappiness for very long? Does your opinion change depending on whether there are children to consider?

The author writes that her husband, and most men of his generation who grew up in the sixties and seventies, are “having to improvise modern fatherhood without any kind of useful precedent.” When Patrick claims that’s he’s already a hundred times more involved with his children than his father was with him, Kyran is sympathetic, but tells him,“it’s still not enough.” What do you observe about the evolving role of fathers? Is the gap closing between men’s and women’s expectations of dads?

“The Rearview” is about the author coming to terms with her mother’s and father’s limitations as parents, in the course of raising her own children. Was there a particular moment when you first saw your parents as people? If you have children, has raising them changed the way you saw your own childhood and the strengths or weaknesses of your parents?

The author’s feelings about the United States changes gradually but profoundly over the course of the book. How does the trajectory of her relationship with America run parallel with that of the love affair that lead her there?

In “The Crush,” the author describes how a seemingly harmless extramarital flirtation sparks an intense infatuation. Do you think it’s possible to indulge an extramarital attraction without consequences? Where is the line of fidelity crossed — in thoughts and feelings, or only in deeds? Have you ever disclosed an outside crush to your mate? Would you ever? What would be the risks and benefits of doing so?

“Youthful sex appeal is a hefty talking stick in our culture,” the author states, in “Goodbye, Girl.” Do you agree with her fear that women become invisible with age? Name some women who defy it.

In the epilogue, the author writes that “nested within our collective story, there is also my story, a story about what it means to belong: to a family and a place, and still, to one’s self.” Where are you in your own story of belonging?