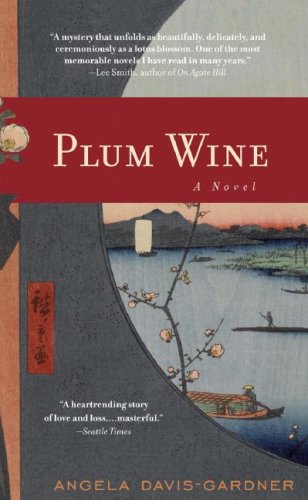 In the beautifully written, multi-layered novel Plum Wine, Angela Davis-Gardner portrays the love story between Seiji, a Japanese potter who endured the terrors brought about by the Hiroshima bombing, and Barbara Jefferson, a lonely young American teaching English at an all-girls Tokyo university. This tale is much more than a romance; the narrative combines elements of mystery, culture, history, literature, and poetry in one woman’s life-altering journey through the recent past.

Plum Wine is set in Japan during the Vietnam War era. At the onset of the novel,

In the beautifully written, multi-layered novel Plum Wine, Angela Davis-Gardner portrays the love story between Seiji, a Japanese potter who endured the terrors brought about by the Hiroshima bombing, and Barbara Jefferson, a lonely young American teaching English at an all-girls Tokyo university. This tale is much more than a romance; the narrative combines elements of mystery, culture, history, literature, and poetry in one woman’s life-altering journey through the recent past.

Plum Wine is set in Japan during the Vietnam War era. At the onset of the novel, Barbara receives a bequest from her fellow teacher and mentor, Michiko Nakamoto (Michi-San), a Hiroshima survivor who has died from unknown causes. Michi-San has left Barbara a tansu chest filled with bottles of homemade plum wine dated each year from 1939 to the present year, 1966. Wrapped around each bottle are sheets of rice paper covered in calligraphy that reveal portions of Michi-San’s and her mother’s lives. As Barbara journeys through two worlds, two time periods, and two women’s lives in order to understand the texts, which she cannot translate herself, her passage unfolds a story of shame and secrets, of trust and betrayal, and the clash of civilizations.

Angela Davis-Gardner is the author of the internationally acclaimed novels Felice, Forms of Shelter, and Plum Wine, which was inspired by the time she spent teaching Tsuda College in Tokyo, Japan. An Alumni Distinguished Professor at North Carolina State University in Raleigh, Angela has won nearly thirty awards for writing and teaching. She lives in Raleigh, North Carolina, where she is at work on her next novel.

“A mystery that unfolds as beautifully, delicately, and ceremoniously as a lotus blossom. One of the most memorable novels I have read in many years.” —Lee Smith, author of On Agate Hill

“A heartrending story of love and loss…masterful.” —Seattle Times

“The story of a powerful and moody love affair between a visiting American schoolteacher and a Japanese potter, a survivor of the Hiroshima bombing. In stark and lovely prose, Davis-Gardner creates a believable excursion into the deep heart of a good young woman.”
—Alan Cheuse, NPR’s All Things Considered

Discuss the storytelling approach used in Plum Wine. Does it change the reading experience to watch history unfold from the translation of buried papers? Is this narrative approach effective?

Discuss the significance of a fox to the Japanese. What is so appealing about the stories about the Fox-Woman? Can Barbara be considered a fox? If so, in what ways?

“It was strange, she thought, how the placement of objects affected them. It was true for people too.” (page 12) Sentiments of alienation engulf Barbara throughout the novel. What makes her feel so different?

How does learning about Michi-San, Seji, and Rie’s Hiroshima experiences affect Barbara? Do their stories further distinguish her or do they make her feel more connected?

Memories from the bombing haunt Seiji and Michi. Describe some of these haunting images. How do these terrible recollections fit into the larger scope of the book?

Barbara is deeply affected by the revelation that Michi, Seiji, and her student Rie are survivors of the atomic bombing. It is even harder for her to understand the devastating psychological effects wrought by war. How do her feelings change after she runs into American officers on a train ride and when she learns of Rie’s side job?

Tradition and heritage are major themes throughout this novel. How are they treated differently by Japanese and American characters? Does the cultural distinction prohibit Barbara from participating in Japanese traditions?

“Hibakusha have become almost a pariah caste in Japan.”(p. 99) Why are Hiroshima survivors, “hibakusha,” tainted? Do you think Seji is correct by saying hibakusha never love?

Michi-san’s fondness for plum trees leads her to name her daughter Ume, which means plum. What does the plum tree symbolize?

Why did Michi leave Barbara her papers? Explain what it means to have “an inheritance of absence.” (p. 179)

How does Rie explain that one’s true valor rises above class? Does this idea of valor above class transcend all cultures? Is this a modern idea or can it be traced throughout history?

Plum Wine portrays the bonds people form under the cruelest of circumstances. Discuss the connections between the characters, their traumas in both past and present, and the wars that they survived.

Barbara realizes that Seiji is leaving out parts of Michi’s writing in his translation. What secret does Barbara uncover? In what ways are Seiji’s actions the result of his cultural perspective? In what ways do they transcend cultural concerns?

Barbara comes to Japan on a personal journey in search of the essence of her mother. Did she accomplish her goal? Why or why not?

We often read about wartime experiences from a male point of view. Based on Plum Wine, how is wartime experience different for a female? As a reader, does this change the way you think about the events and repercussions of World War II?