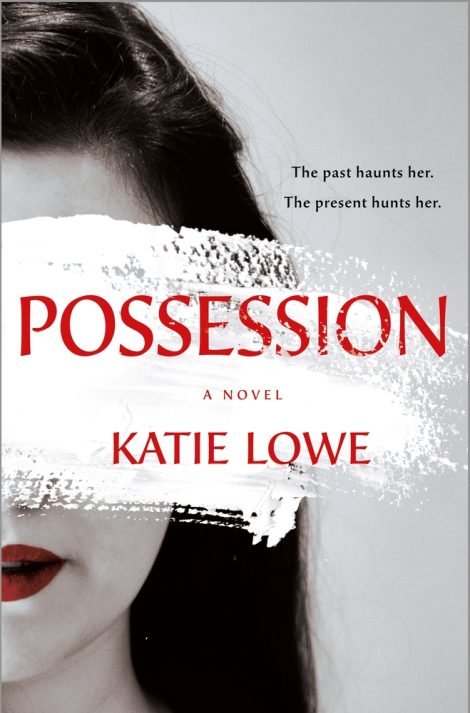 Possession is a chilling psychological thriller written with Katie Lowe’s signature “subtle, persistent, and unmistakable creepiness” (Kirkus, on The Furies).

The past haunts her. The present hunts her.

Conviction @ConvictionPod · 1m
The investigating officer: “I’ve seen a lot of homicides in the years since, but…that’s the one that keeps me up at night.”

The husband’s best man: “They had everybody fooled. Or at least, she did. But I always knew something was off.”

Hannah, the wife: “I told you.

Possession is a chilling psychological thriller written with Katie Lowe’s signature “subtle, persistent, and unmistakable creepiness” (Kirkus, on The Furies).

The past haunts her. The present hunts her.

Conviction @ConvictionPod · 1m
The investigating officer: “I’ve seen a lot of homicides in the years since, but…that’s the one that keeps me up at night.”

The husband’s best man: “They had everybody fooled. Or at least, she did. But I always knew something was off.”

Hannah, the wife: “I told you. I don’t remember anything. I don’t know.”

That’s all to come, this season, on Conviction. Get ready for our most twisted season yet.

Ten years ago, Hannah’s husband was brutally murdered in their home, and she (conveniently) doesn’t remember a thing about that night. But the police charged someone else—a stranger—and put him away for life. And Hannah packed up her six-year-old daughter and left London behind.

But now her hard-won countryside peace is threatened. Conviction, a viral true crime podcast known for getting cases reopened and old verdicts overturned, has turned its attention to Hannah’s husband’s murder for its new season. They say police framed the man who was found guilty, and that Hannah has more suspicious secrets than just her memory loss: a history of volatility; citations at the clinic where she worked as a psychiatrist; dependencies on alcohol and pills; and a familicidal grandmother, locked away in a Gothic insane asylum until her death. As Hannah loses the trust of everyone she loves, the only person she feels she can confide in is a former colleague, Darcy, who’s come back into her life—but who may have motives of her own. But Hannah can’t tell even Darcy her deepest secret: that she’s still tormented by the memory of her husband and the crater he carved through her life.

Katie Lowe is a writer living in Worcester, UK. A graduate of the University of Birmingham, she has a BA (Hons) in English and an MPhil in Literature & Modernity, and is currently pursuing her PhD in female rage in literary modernism and contemporary women’s writing. She is the author of The Furies and Possession.

“[With] a subtle, persistent, and unmistakable creepiness…. Murder and witchcraft mix with a heady cocktail of drugs, booze, and revenge in this elegant, pitch-perfect coming-of-age story.” —Kirkus

“Dark and alluring, Katie Lowe’s debut novel, The Furies, is a sensory buffet of beautifully gritty prose and a plot that combines witchcraft, murder and the power of angry young women searching for vengeance.” —Shelf Awareness

“Powerful and atmospheric…those who thrill to dark coming-of-age tales with a dash of the uncanny will find much to enjoy.” —Publishers Weekly

“Lowe’s dark, suspenseful debut combines the teenage sisterhood of The Craft and Emma Cline’s The Girls with the violent schoolyard vengeance of Heathers. Poetic, lurid prose captures the girls’ teenage self-possession, while a heady swirl of adolescent hormones, drugs, and alcohol adds a layer of distortion to the plot. Fans of Greer Macallister, Paula Hawkins, and Janelle Brown will devour Violet’s journey.” —Booklist

“Witchcraft. Murder. A town with a dark history. And scariest of all—adolescence. This sinister book follows what happens to a group of 16-year-old girls after they explore the history of witch trials at their school, Elm Hollow Academy, with their mysterious art teacher, Annabel. Soon, they become convinced that the magic is real, and it could be theirs.” —Refinery29

“In the late 1990s, a study group at a girls’ boarding school brings together four young women with an interest in mythology, whose studies quickly turn toward the dark and dangerous. Their anger and intensity is given space in a way we don’t often see in coming-of-age stories about young women, and the result is gripping and satisfying.” —LitHub

“A book compared to The Craft, The Secret History, and the novels of Megan Abbott? This one both caught my eye and jumped to the top of my Halloween reading list.…Simultaneously a coming-of-age tale, a murder mystery, and a story of female friendship, power, and rage, The Furies is the perfect wild and spooky read for the season. Toil and trouble await.” —BookBub

It’s the sound of my husband’s blood on the floorboards that wakes me.

I stand over our bed, and I look at him, looking at me, and I think of the day we moved in.

I don’t know why it comes to me, then, but it does: the two of us aching and dripping with sweat.

We christened this bed. We made it ours. And when I peeled my body from his, he stared at me, dazed and gasping—stunned by the force of my love.

He’s looking at me in the same way, now.

Later, I will be asked about this moment: if I saw the body, if I looked. I’ll tell them I couldn’t, of course. That I shielded my eyes, and ran to find help.

But I don’t. I stand over him, watching. The only sound is the tapping, and my—only my—breath.

He’s quite clearly dead: perfectly still, his lips cracked and gray. And in his throat, the knife—my knife, a wedding gift—is angled sharply, like a conquering flag.

I stand over him, and try to piece together a story that makes sense. An explanation.

I remember words exchanged in the kitchen. A woman’s perfume on his skin. The bloody slick of wine around a glass, sediment clinging to the base. His footsteps, leaving me behind.

And after that: nothing.

Only an absence, a blur.

Now, I look at the face of the man I once loved, his pale body cooling in the predawn light.

And I do not feel a thing.

“I don’t remember,” I say, in a voice that’s hoarse from screaming—another thing I can’t recall.

“I heard a tapping noise. Like this.” I tap-tap-tap on the metal desk. The strip light flickers overhead. “More of … more of a drip. And then I opened my eyes.”

The officers questioning me—a man and a woman, both fresh-faced and focused—nod.

They don’t believe me. And I can’t say I blame them. I’m not sure I’d believe me, if our roles were reversed.

“I was on the floor,” I go on. Evie, our daughter—my daughter—shivers in her sleep, her head resting on my lap, body stretched across the bed I’ve built with empty chairs. I run a finger through her curls, the way he used to do with mine. “I must’ve hit my head. I was dizzy. But I got up, and…” I close my eyes, hoping they’ll take the hint.

He was dead, I want to say. You know that part.

But I can’t. Not in front of Evie. I need to protect her from that, for the moment at least.

I’m asked to sign my statement, which they’ve typed it in on my behalf. I found the victim to be clearly deceased, via a single stab wound to his carotid artery. There’s something soothing about the medical wording—the bare facts of it. Still, I correct it. “I didn’t know it was … the artery. Won’t that be for the coroner to … You know?”

The male officer smiles. “My fault. I thought you were a doctor, so…” I know what he’s saying. So you’d know where to stick the knife.

“I’m a psychiatrist,” I say. Not that it makes a difference: I still went to medical school; still know the basics of anatomy. But I’m not sure he knows that.

After eleven hours, they let me go. They don’t say it, but I know: this is conditional. A one-way flight to Barbados, right now, would all but confirm my guilt.

I check us into a nearby hotel, where I see myself for the first time in the greenish bathroom light.

I’m surprised at my own expression—at the blankness of it. As though I’m expecting to find myself mid-scream, rigid as a Halloween mask. But aside from the faint sheen of filth on my skin, the clot of dried blood at the back of my head, I’m still very much myself. This is not something I expect to work in my favor.

I imagine conversations taking place at the police station. Not exactly a looker, I think they’ll say. A bit mismatched, weren’t they?

Or: She’s not very friendly. Closed-off. Like she’s hiding something.

I can’t dispute any of this. They’ll think it, because it’s true.

Still, I shower off the day, and crawl into bed with Evie. I smell home on her skin, and pull her close.

People say motherhood brings it out in you: a need to protect your child that verges on madness.

Only now do I realize it’s true.