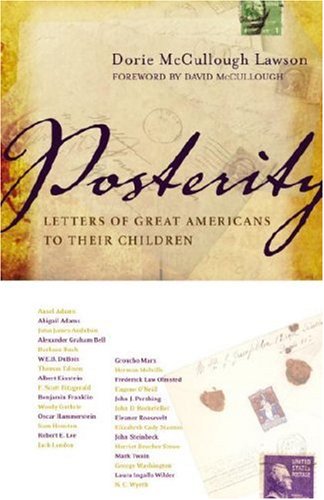 Letters of Great Americans to Their Children

An elegantly designed, beautifully composed volume of personal letters from famous American men and women that celebrates the American Experience and illuminates the rich history of some of America’s most storied families.

Posterity is at once an epistolary chronicle of America and a fascinating glimpse into the hearts and minds of some of history’s most admired figures. Spanning more than three centuries, these letters contain enduring lessons in life and love, character and compassion that will surprise and enlighten.

Included here are letters from Thomas Jefferson to his daughter,

An elegantly designed, beautifully composed volume of personal letters from famous American men and women that celebrates the American Experience and illuminates the rich history of some of America’s most storied families.

Posterity is at once an epistolary chronicle of America and a fascinating glimpse into the hearts and minds of some of history’s most admired figures. Spanning more than three centuries, these letters contain enduring lessons in life and love, character and compassion that will surprise and enlighten.

Included here are letters from Thomas Jefferson to his daughter, warning her of the evils of debt; General Patton on D-Day to his son, a cadet at West Point, about what it means to be a good soldier; W.E.B. DuBois to his daughter about character beneath the color of skin; Oscar Hammerstein about why, after all his success, he doesn’t stop working; Woody Guthrie from a New Jersey asylum to nine-year-old Arlo about universal human frailty; sixty-five-year-old Laura Ingalls Wilder’s train of thought about her pioneer childhood; Eleanor Roosevelt chastising her grown son for his Christmas plans; and Groucho Marx as a dog to his twenty-five-year-old son.

With letters that span more than three centuries of American history, Posterity is a fascinating glimpse into the thoughts, wisdom, and family lives of those whose public accomplishments have touched us all. Here are renowned Americans in their own words and in their own times, seen as they were seen by their children. Here are our great Americans as mothers and fathers.

Dorie McCullough Lawson graduated from Middlebury College, where she majored in history. She works and lives in Rockport, Maine with her husband and three children. This is her first book.

“Each letter has a distinct tone, from congratulatory to scolding, which shines a light on one facet of each great American’s personality. A one-of-a-kind collection.” —Library Journal

“Years ago, parents wrote to their children letters of instruction about duty, industry, propriety—a ritual that has largely disappeared from American life, and this book reminds us of why we should be sorry about it.” —Pittsburgh Post-Gazette

Do any of the letters remind you of your own communications with family? What values do you feel you have in common with the correspondents?

One criticism of the current reliance on email and text messaging is that it’s difficult to convey tone and feeling accurately through the written word. Do you think this applies to the letters in the book, as well? How much emotion are you able to perceive through the writing? Are letters and emails similar or dissimilar in this way?

Many of the letters in the book, implicitly or explicitly, give the impression that the recipient is being groomed to continue a legacy of the parent. Whether John Quincy Adams, his father’s pride and joy; Frederick Olmsted, Jr., who was even renamed to take after his father; or John D. Rockefeller, Jr., who was tapped to continue his father’s philanthropic efforts, each was at the receiving end of much solemn advice and some prescriptions for self-improvement and some pretty tall orders for self-improvement and education. How do you imagine such letters were received? Do you find their contents useful, or overly proscriptive? How would you react to receiving such a letter from a parent?

Does any of the advice passed from parent to child in these letters strike you as particularly valuable? Do you take away any lessons for your own life?

What do you think of the author’s selection of letters? Do you like the figures she chose? Whom would you opt to include or exclude?

Several of the letter-writers (Thomas Jefferson, Eugene O’Neill, Theodore Roosevelt, Frederick Law Olmsted, and N.C Wyeth among them) appear in a number of entries throughout the book, allowing the reader to get to know them through time and possibly to develop more of a relationship with them. Is there one writer who stands out as the one you grew to know the best? Is there anyone you would have liked to see more of?

Did any of the pull-out quotes in the text strike you as particularly apt, or moving? Which ones stood out? Were there instances where you would have chosen to highlight a different quote from that letter?

Do you find the author’s introductions to each letter helpful? Do you find her point of view objective, or do her comments betray certain favorites among the letter writers?

Of the figures in the book, who is the best parent, in your view? Who seems to fall short?

In your own life, how do you decide what letters to keep for yourself or for posterity?

Some of the letters in this book are timeless, and some firmly set the writer in a particular time and place. Which letters did you think gave timeless wisdom, and which were more specific to circumstance or setting?

Which letters were your favorites? Were there any that particularly piqued your interest and made you want to learn more about the person who wrote them?

If, a century from now, your letters, emails, or text messages were to be included in a similar collection, what impression would they give the reader? What would you want for them to convey? Are there any particular letters—yours or someone else’s—that you’d like to think will be preserved?