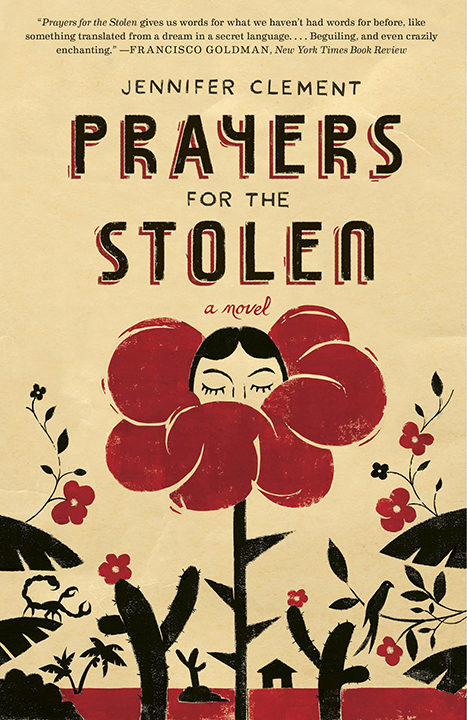 PRAYERS FOR THE STOLEN

Ladydi Garcia Martínez is fierce, funny and smart. She was born into a world where being a girl is a dangerous thing. In the mountains of Guerrero, Mexico, women must fend for themselves, as their men have left to seek opportunities elsewhere. Here in the shadow of the drug war, bodies turn up on the outskirts of the village to be taken back to the earth by scorpions and snakes. School is held sporadically, when a volunteer can be coerced away from the big city for a semester.

Ladydi Garcia Martínez is fierce, funny and smart. She was born into a world where being a girl is a dangerous thing. In the mountains of Guerrero, Mexico, women must fend for themselves, as their men have left to seek opportunities elsewhere. Here in the shadow of the drug war, bodies turn up on the outskirts of the village to be taken back to the earth by scorpions and snakes. School is held sporadically, when a volunteer can be coerced away from the big city for a semester. In Guerrero the drug lords are kings, and mothers disguise their daughters as sons, or when that fails they “make them ugly” – cropping their hair, blackening their teeth- anything to protect them from the rapacious grasp of the cartels. And when the black SUVs roll through town, Ladydi and her friends burrow into holes in their backyards like animals, tucked safely out of sight.

While her mother waits in vain for her husband’s return, Ladydi and her friends dream of a future that holds more promise than mere survival, finding humor, solidarity and fun in the face of so much tragedy. When Ladydi is offered work as a nanny for a wealthy family in Acapulco, she seizes the chance, and finds her first taste of love with a young caretaker there. But when a local murder tied to the cartel implicates a friend, Ladydi’s future takes a dark turn. Despite the odds against her, this spirited heroine’s resilience and resolve bring hope to otherwise heartbreaking conditions.

An illuminating and affecting portrait of women in rural Mexico, and a stunning exploration of the hidden consequences of an unjust war, Prayers for the Stolen is an unforgettable story of friendship, family, and determination.

Jennifer Clement studied literature in New York and Paris. She was awarded the NEA Fellowship for Literature and the Sara Curry Humanitarian Award for her most recent novel, Prayers for the Stolen. Formerly president of PEN Mexico, she currently lives in Mexico City.

“Beguiling, and even crazily enchanting… [Clement] writes a poet’s prose, spare and simple, creating her world through patterns of repeated and varied metaphors and images that blossom inside the reader like radiant poppies…Prayers for the Stolen gives us words for what we haven’t had words for before, like something translated from a dream in a secret language. The novel is an ebullient yet deeply stirring paean to its female characters’ resiliency and capacity for loyalty, friendship, compassion and love, but also to the power of fiction and poetry.”—Francisco Goldman, New York Times Book Review

“[A] beautiful, heart-rending novel…Fiercely observed comparisons of human and inanimate life form a continuing motif throughout the story…[Clement] achieves the formidable feat of smooth, clear English that pulses with an energy and sensibility that is convincingly Latin American… So compelling…Prayers for the Stolen is a powerful read.”—Wall Street Journal

“The theme of Prayers for the Stolen is the wanton violence inflicted on women and the destruction of communities as a result of the drug trade in Mexico, but Clement’s eye for the revealing detail, the simple poetry of her language and the visceral authenticity of her characters turn that deadening reality into a compelling, tragically beautiful novel.”—Yann Martel, author of Life of Pi

“The most enchanting journey I’ve taken in a long, long time, and the most important. Prayers For The Stolen is a hand-guided tour through a ruthless true corner of our century, with characters so alive they will burrow into your heart. Stunningly written, magically detailed, you see, smell and taste the action on every page, feel every foible, and miss the candor of these funny, achingly human voices long after you put them down. As the heroine herself might say: not something to read but to lick off a plate.” —DBC Pierre, Man Booker Prize-winning author of Vernon God Little

Prayers for the Stolen is about a young girl growing up in the midst of the drug wars in Mexico. Are you able to relate to her experiences? If so, in what way?

The novel is set on a remote mountaintop in Guerrero, Mexico, a place notorious for the trafficking of young girls. What was your exposure to these issues prior to reading the book? What did you learn?

Prayers for the Stolen is narrated by the unforgettable Ladydi Garcia Martinez. What does her voice bring to the story? How would the novel be different if told through another character’s perspective?

Ladydi’s relationship with her mother is one defined by conflict. How is Prayers a story of mothers and daughters? Could you relate to their struggle?

Prayers for the Stolen follows Ladydi during a crucial point in her adolescence and young adulthood. How does her experience compare with other coming-of-age stories you’ve read?

Ladydi’s school friends share many of the same struggles, but experience life in Guerrero with some differences. How do their stories contribute to Ladydi’s?

We meet Ladydi’s father only via flashbacks and references. Rita holds fast to hope for his return, while Ladydi believes he has abandoned them for good. How does the absence of fathers and husbands affect the inhabitants of Guerrero?

When Ladydi meets Julio, her first love, she’s working for a wealthy family in Acapulco as a maid. What are your thoughts on their relationship? Should they have stayed together?

English and American pop cultural references are littered throughout Prayers for the Stolen. How do they enrich the book?

Ladydi was named for Princess Diana. To what extent does her name, and where it came from, impact the way she identifies herself? How does it change the way she is perceived by others?

From digging holes and hiding in them to disguising their children as boys, the characters in Prayers for the Stolen take action in many ways to physically survive. How do you think they survive emotionally?

“Now we make you ugly, my mother said.” In Prayers for the Stolen, female beauty can be a dangerous thing. How does your culture define beauty for women? Do you agree with these views?

Towards the end of the novel, Ladydi is arrested and sent to prison. While she’s there, she befriends a number of women. How do these relationships help her endure?

The prisoners in Santa Marta jail make collages to articulate their experiences and feelings. Did these collages, as symbols, teach you something about these characters? What would you include in a collage of your life?

At its core, what do you think this novel is most about: survival, love, revenge, or hope?