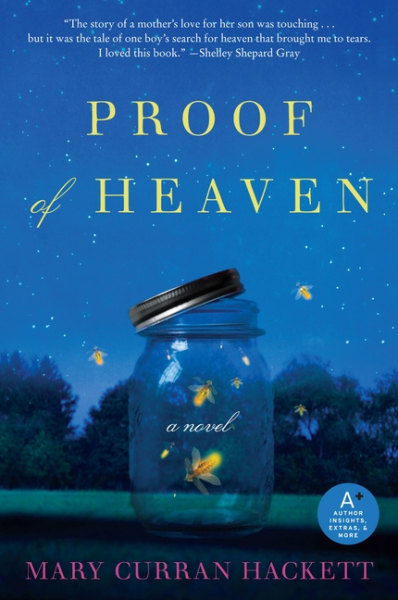 A mother’s faith, a child’s courage, a doctor’s dedication—a moving and thought-provoking tale of hope, love, and family…

He might be young, but Colm already recognizes the truth: that he’s sick and not getting better. His mother, Cathleen, fiercely believes her faith will protect her ailing son, but Colm is not so sure. With a wisdom far beyond his years, Colm has come to terms with his probable fate, but he does have one special wish. He wants to meet his father who abandoned his beloved mother before Colm was born.

But the quest to find the dying boy’s missing parent soon becomes a powerful journey of emotional discovery—a test of belief and an anxious search for proof of heaven.

A mother’s faith, a child’s courage, a doctor’s dedication—a moving and thought-provoking tale of hope, love, and family…

He might be young, but Colm already recognizes the truth: that he’s sick and not getting better. His mother, Cathleen, fiercely believes her faith will protect her ailing son, but Colm is not so sure. With a wisdom far beyond his years, Colm has come to terms with his probable fate, but he does have one special wish. He wants to meet his father who abandoned his beloved mother before Colm was born.

But the quest to find the dying boy’s missing parent soon becomes a powerful journey of emotional discovery—a test of belief and an anxious search for proof of heaven.

A magnificent debut novel, Mary Curran Hackett’s Proof of Heaven is a beautiful and unforgettable exploration of the power of love and the monumental questions of life, death, and the afterlife.

Mary Curran Hackett is an adjunct English professor at the University of Cincinnati. She lives with her husband and children in Cincinnati, Ohio.

“Proof of Heaven belongs on any keeper shelf. It’s beautifully written, mesmerizing and tragic, thought-provoking, and a reaffirmation of faith….I loved this book.”—Shelley Shepard Gray

Proof of Heaven opens with several quotations, one of them by Blaise Pascal: “The Heart has reasons that Reason does not know.” Why do you think the author picked this quotation? What do you think the quotation means? How does this quotation relate to the story, the theme of the book, and each character’s particular journey? Can you relate to these words? Has there ever been a time in your life that you felt your heart and mind wanted different things? Do you find yourself torn between the two? Are you more apt to follow your heart or your mind?

Each character has a different way of approaching his or her faith in God and of thinking about what happens when we die. What does Cathleen believe? What does Colm? Dr. Basu? Sean? The Monsignor? Do you identify with any of these characters’ approaches to his or her belief? Does anyone’s belief system particularly bother or upset you? Why? Do you see yourself or any of your loved ones in any of the characters? What are your beliefs? Do you feel they fit into any particular religion? Why or why not?

How do you think Cathleen and Sean’s religion informs (or doesn’t inform) their beliefs? They are both Catholic, but they have very different perspectives on their religion and their faith. Whether you are Catholic or not, can you identify with the characters’ struggles to make sense of the religion they have been raised to believe in but come to feel differently about as they have grown up and experienced it?

Dr. Basu was raised a Hindu but becomes an agnostic. What changed his belief? Does he transform again?

Colm doesn’t believe in anything at first. What do you think he comes to believe in the end? And do you believe in a higher power or God?

Do you think Sean’s call to become a priest was real? Do you believe people can be called by God to a vocation? Why or why not? What changed in him?

Do you think religion offers a reasonable framework to discover God? Do you feel that a religion is necessary to experience the divine? Why or why not?

Compare and contrast the relationships that Cathleen has with her son, her brother, Monsignor, and Dr. Basu. How does she interact with them differently? Similarly? Why do you think so?

Each character has the opportunity to interact individually with another character at least once in the story. For example, Colm has several one-on-one conversations with his mother, Dr. Basu, and Sean. Sean gets to talk to his sister, Dr. Basu, and Colm one-on-one as well. And Dr. Basu forms unique bonds with Colm, Cathleen, and Sean through several intimate conversations. While all of the characters ultimately end up on the journey together as a group, which individual friendship struck you most? Dr. Basu and Sean? Dr. Basu and Colm? Cathleen and Dr. Basu? Cathleen and Colm? Which relationship did you respond to most positively? Why?

Throughout the story, the universe—its expansion, form, and matter—is alluded to in connection with characters, the plot, and even the human heart. Did you ever think of the heart as an “electric” organ, or did you ever conceive of the electricity and energy of the stars being compared to that of the human heart and brain? How does each character embody this connection? Which scenes do you find illustrate this relationship best?

In this story, the author intended to juxtapose the earth and sky, or earthly and heavenly pursuits, in the story’s characters and settings. She designed each character to represent the elements of earth, wind, fire, and water. Cathleen embodies the concept of mutability and water. What about her is mutable or changing? Does she strike you as someone who transforms or changes often in situations? Does she ever appear with or by water? What do you think the significance is in each of these water scenes? Dr. Basu is very much grounded to the earth. He’s a pragmatic man who looks for his answers in the world that’s at his fingertips, through science and empirical data. Which scenes strike you and show you that he is rooted to the earth? Does he ever seem to change and take on other elements as he grows and opens his heart to the other characters? Sean embodies all that is explosive—his attitude, early calling (and later his addictions), anger, passion, and even his profession are linked to fire. Which scenes stand out for you when Sean exhibits this element? Colm embodies the wind, or the spirit. His name even means “dove” or “peace.” What part of the story strikes you as Colm most embodying “the spirit”? Do any of the characters transform at all or take on other elements throughout the story? Where? How?

The author also modeled the characters in another way— after familiar characters in Judeo-Christian tradition. Cathleen, whose Gaelic name means “pure one,” represents Mary, the mother of Jesus; and Sean represents at various times both Joseph, the foster father entrusted with the earthly care of Jesus, and later the trusted disciple John, whom Jesus charges with caring for Mary at Jesus’s death. (In Gaelic, Sean means “John.”) Dr. Basu, or Gaspar, represents the wise man from the East (most probably from the country that is now India), and he embodies the gifts, wisdom, and protection offered to the child Jesus. Did you see the connections in the story? Does Colm strike you as Christlike? What about him reminds you of the story of Jesus? What doesn’t? Which parts of the story sound familiar—something you may have heard in the Gospels or seen in familiar Christian stories?

Throughout the story, the author juxtaposes heavenly and earthly settings. Where does each character find he or she is closest to the divine? Which character finds solace in church? In nature? In the presence of other people? In his or her own mind? Where do you feel closest to the divine? In a church? By the shore? Under a night sky? Amid nature’s phenomena? In the arms of a loved one? In the eyes of a child?

Cathleen, Dr. Basu, and Colm travel to Italy to try a healing ritual at a place where many miracles have been alleged to happen. Do you think it was responsible of Cathleen to put Colm through such an ordeal? Do you believe in miracles? Have you ever prayed for a miracle or experienced one? Do you think Colm’s “miracle” was realized? In Italy? Or on his road trip? What do you think makes a miracle a miracle?

Colm’s quest to find his father resembles the larger quest of all of humanity’s attempt to understand where we come from and where we are headed. Most of us have feelings about whether we believe or don’t believe in God. Colm doesn’t believe in heaven but he hasn’t given up hope in finding his father. Do you think we are all a little like Colm: reluctant believers who deep down want to know or believe that someone is out there, loving us from afar and keeping us within their benevolent arms? Does Colm find what he is looking for? What do you think? Have you found what you’re looking for?

The final quotation in the book is by Walt Whitman. He writes, “Failing to fetch me at first keep encouraged, / Missing me one place search another, / I stop somewhere waiting for you.” Why do you think the author chose this quotation? Do you feel a kinship to those whom you have lost in your life? Do you find your lost loved ones in unexpected places?

Where do you look for, and have you found, proof of heaven?