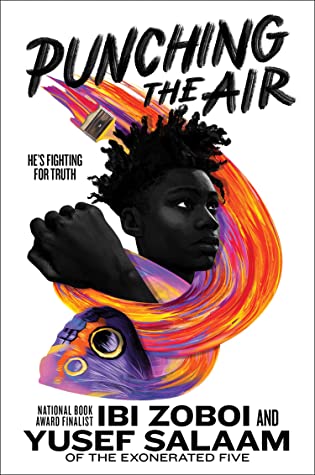 The story that I thought

didn’t start on the day

Amal Shahid has always been an artist and a poet. But even in a diverse art school, he’s seen as disruptive and unmotivated by a biased system. Then one fateful night, an altercation in a gentrifying neighborhood escalates into tragedy. “Boys just being boys” turns out to be true only when those boys are white.

The story that I think

will be my life

The story that I thought

didn’t start on the day

Amal Shahid has always been an artist and a poet. But even in a diverse art school, he’s seen as disruptive and unmotivated by a biased system. Then one fateful night, an altercation in a gentrifying neighborhood escalates into tragedy. “Boys just being boys” turns out to be true only when those boys are white.

The story that I think

will be my life

Suddenly, at just sixteen years old, Amal’s bright future is upended: he is convicted of a crime he didn’t commit and sent to prison. Despair and rage almost sink him until he turns to the refuge of his words, his art. This never should have been his story. But can he change it?

With spellbinding lyricism, award-winning author Ibi Zoboi and prison reform activist Yusef Salaam tell a moving and deeply profound story about how one boy is able to maintain his humanity and fight for the truth, in a system designed to strip him of both.

Ibi Zoboi holds an MFA from Vermont College of Fine Arts. Her novel American Street was a National Book Award finalist and a New York Times Notable Book. She is also the author of Pride and My Life as an Ice Cream Sandwich, a New York Times bestseller. She is the editor of the anthology Black Enough. Born in Haiti and raised in New York City, she now lives in New Jersey with her husband and their three children. You can find her online at .

Dr. Yusef Salaam was just fifteen years old when his life was upended after being wrongly convicted with four other boys in the “Central Park jogger” case. In 2002, after the young men spent years of their lives behind bars, their sentences were overturned. Now known as the Exonerated Five, their story has been documented in the award-winning film The Central Park Five by Ken Burns, Sarah Burns, and David McMahon and in Ava DuVernay’s highly acclaimed series When They See Us. Yusef is now a poet, activist, and inspirational speaker. He is the recipient of a Lifetime Achievement Award from President Barack Obama, among other honors. He lives in Atlanta, Georgia, with his wife, Sanovia, and their children.

“Zoboi and Salaam together craft a powerful indictment of institutional racism and mass incarceration through the imagined experience of Amal, a Black, Muslim 16-year-old facing imprisonment.” -Publishers Weekly (starred review)

“Stories, at their best, will break something old in you or build something new. Remarkably, Punching The Air does both. Zoboi and Salaam have created nothing short of a masterwork of humanity, with lyrical arms big enough to cradle the oppressed, and metaphoric teeth sharp enough to chomp on the bitter bones of racism. This is more than a story. This is a necessary exploration of anger, and a radical reflection of love, which ultimately makes for an honest depiction of what it means to be young and Black in America.” -Jason Reynolds, award-winning, bestselling author of Long Way Down

“This book will be Walter Dean Myers’s Monster for a new generation of teens. An important, powerful, and beautiful novel that should be an essential purchase for any library that serves teens.” –School Library Journal (starred review)

1. Amal observes that authorities at school, in the justice system, and the public at large, do not see him, but rather construct a self they assign to him, “shaping me into / the monster / they want me to be” (p. 16). Where does that monster image come from, and why is it so easy to assign it to Amal?

2. Amal expresses a feeling of inevitability about his fate in the system (p. 8), and the shaping of his life by outside forces, like the prosecutor writing the “script” and directing the “scene” (p. 22), and in the poem “Blind Justice” (p. 44). To what extent do you think he and the other inmates, and the privileged boys, created their own life outcomes, and to what extent are their outcomes results of societal forces?

3. When he is sentenced, Amal compares his life before this moment to Africa and says, “maybe jail / is America” (p. 61). In “DNA,” he connects the shackles he wears leaving the court to the shackles his ancestors wore (pp. 80–81). Discuss the connections between his experience as a black youth in contemporary America and the experiences of early Africans arriving in the Americas. What has changed, and where do we see echoes of the past?

4. Throughout his time in juvenile detention, Amal is told in various ways that he and the other boys have “already become everything we’re supposed to be” (p. 346). Ms. Buford says “I know your type,” and encourages him to just “do what you need to do” (pp. 327–328). Stanford responds to his concern about Kadon by saying, “There’s nothing you can do, Shahid” (p. 324). But Imani works for prison abolition. What do you think Amal’s perspective toward his situation should be? Should he stay angry? Give in? Protest? Have hope? What are his options, and what would be the outcome of any of his choices?

5. On page 133, Amal says of Ms. Rinaldi, “She failed me.” On the surface, he is referring to his grade in her art class, but how can this line be interpreted as a double entendre? In what other ways did Ms. Rinaldi fail Amal? What should she have done differently? Was her treatment of him entirely her fault, or was she also at the mercy of a system? Why did she see his art as separate from him? Why did she think she could “save” him (p. 192)?

6. Amal’s description of gentrification goes beyond a simple residential pattern, to an attitude of ownership. Reread the passage from “The Persistence of Memory,” starting from “They were from where the big houses are” (p. 196) to “we were like get the fuck out!” (p. 197). How does gentrification create antagonism between races and socioeconomic classes? How do you see other societal forces pushing groups of people to fight one another?

7. Compare the description of the black boys to the description of the white boys on page 202. Have you noticed these terms being used in the news and elsewhere? How do you think these ideas and images—whether conscious or subconscious—affect our culture? What about the criminal justice system? If these ideas are present in the minds of individuals at every level—from schools to the public to the police force to the courts and prisons—what will it take to transform the way black youth are viewed and treated?

8. Uncle Rashon says that “school teaches you what to think / not how to think” (p. 206)? In what ways does this ring true in your experience? Amal says that the detention center looks something like school (p. 105), and he calls his middle school “Prison Prep” (p. 127). What do you see as the role school plays in preparing youth for society? Do you think schools should change? In what ways do different kinds of schools serve different purposes? How does this disadvantage some youth more than others?

9. In the poem “Brotherhood,” Kadon’s friends claim Amal, telling him, “You one of us now. / You one of us” (p. 213). What do they mean? Why is it important to them that he identify as one of them? Why does he come to accept it? What are the benefits and drawbacks of joining a group in this environment? Compare the social dynamics and the violence inside the detention center to what Amal experienced on the outside.

10. Why does Amal refuse to comply with Imani’s poetry exercise about Mistakes and Misgivings (p. 221)? How would you react to it in his situation? How does it end up affecting him when he returns to it later?