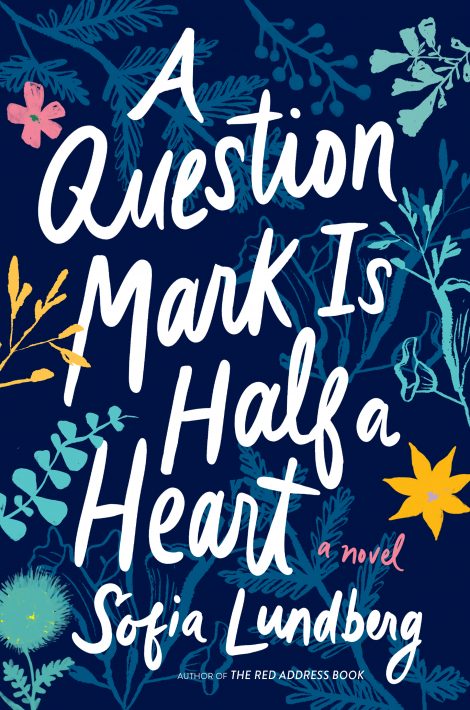 A QUESTION MARK IS HALF A HEART

How deeply can you love when your heart is full of secrets? A sweeping, propulsive family story about a woman learning to love, from the bustle of New York’s fashion scene to a remote, windswept Swedish island, by the acclaimed author of The Red Address Book—“a love letter to the human heart” (Alyson Richman).

By age fifty, Elin Boals has created a perfect life for herself: her wildly successful business as Manhattan’s preeminent fashion photographer is flourishing. Her handsome, patient husband is devoted to her; her teenaged daughter, Alice, has been accepted to the ballet academy of her dreams.

How deeply can you love when your heart is full of secrets? A sweeping, propulsive family story about a woman learning to love, from the bustle of New York’s fashion scene to a remote, windswept Swedish island, by the acclaimed author of The Red Address Book—“a love letter to the human heart” (Alyson Richman).

By age fifty, Elin Boals has created a perfect life for herself: her wildly successful business as Manhattan’s preeminent fashion photographer is flourishing. Her handsome, patient husband is devoted to her; her teenaged daughter, Alice, has been accepted to the ballet academy of her dreams. But then Elin receives an innocuous-looking envelope. Folded inside is a star chart, with an address written by a familiar hand.

Shaken, Elin begins to have startling flashbacks to a life very different from the childhood in a Paris bookstore that she has so lovingly recounted to Alice. In these memories, a poverty-stricken little girl cares for her two ragged baby brothers, laughing with her family on the good days, sheltering them from her mother’s sadness and her father’s wrath on the bad days. Elin also remembers vivid walks with a young classmate, Fredrik, whose steadfast friendship and starlit confidences shaped her young life.

As Elin becomes consumed by these memories, her New York life begins to crumble dramatically. Finally, her family’s troubling questions drive her to face, at last, the brutal secret from her past.

At once a heartwarming family story and a page-turning mystery, A Question Mark Is Half a Heart traces a surprising journey across continents to reconciliation, and toward finding a true sense of home.

Sofia Lundberg is a journalist and former magazine editor. Her debut novel, The Red Address Book, was published in 32 territories worldwide. She lives in Stockholm with her son.

“A warmhearted portrayal of family and forgiveness.” —Kirkus Reviews

“Readers will soak up the suspense as they search for the truth alongside Elin up until the end.” —Publishers Weekly

“Elin is a complex character with a compelling story, and Lundberg avoids the obvious resolutions that readers may expect in favor of a deeper exploration of the meaning of love, forgiveness, and family. This satisfying novel will appeal to fans of Lisa Duffy and Patti Callahan Henry.” —Booklist

It’s dusk. Outside the industrial windows, the sun is setting behind the tall buildings. Stubborn rays wedge their way between the facades; like golden spearheads they penetrate the encroaching darkness. Evening again. Elin hasn’t eaten dinner at home in several weeks. She won’t tonight, either. She turns to look at the building just a few blocks away, where she can see the luxuriant vegetation on her very own roof terrace, the red parasol, and the barbecue that’s already been lit. A narrow column of smoke rises toward the sky.

She catches a glimpse of someone, probably Sam or Alice. Or maybe a friend who’s come over to visit. All she can see is a figure moving about purposefully between the plants.

They’re sure to be waiting for her again at home. In vain.

Behind her, people move back and forth across the studio floor. A gray-blue backdrop hangs from a steel fixture, swooping from wall to floor. A chaise longue upholstered in gold brocade has been placed in the center. On it, a beautiful woman reclines, with strands of pearls around her neck. She’s wearing a wide, flowing white-tulle skirt that spreads across the floor. Her upper body is glossy with oil, and the chunky pearl necklaces cover her naked breasts. Her lips are red, her skin smoothed to perfection with layers of makeup.

Two assistants are correcting the light: they raise and lower the big light boxes, click the camera shutter, read the meters, start again. Behind the assistants stands a team of stylists and makeup artists. They carefully observe every detail of the image that’s in the process of being created. They’re dressed in black. Everyone is dressed in black, everyone but Elin. She’s wearing a red dress. Red like blood, red like life. Red like the evening sun outside the window.

Elin is torn from her thoughts as the beautiful woman, growing irritated, begins to make dissatisfied noises.

“What’s taking so long? I’m not going to be able to hold this pose much longer. Hey! Can we get started now?”

She sighs and twists her body into a more comfortable position, and the necklaces fall to the side and reveal her nipple, which is hard and blue. Two stylists are on the spot immediately, patiently and carefully rearranging the pearls to cover it. Some of the necklaces are stuck down with double-sided clear tape, and the woman’s skin rises in goose bumps from the contact. She sighs audibly and rolls her eyes, the only part of her body she’s free to move.

A man in a suit, the woman’s agent, walks over to Elin. He smiles politely, leans toward her, and whispers, “We’d better get started, she’s getting impatient and it won’t end well.”

Elin shakes her head vaguely and looks back to the window. She sighs.

“We can stop now if she wants. I’m sure we have enough pictures already, it’s just a spread this time, not a cover.”

The agent holds up his hands and stares at her hard.

“No, absolutely not. We’ll do this one too.”

Elin tears herself away from the view of her home and walks toward the camera. Her telephone vibrates in her pocket; she knows who’s trying to reach her but doesn’t respond. Knows the message will just play on her conscience. Knows the people at home are disappointed.

As soon as Elin gets behind the camera, a thousand tiny stars light up in the woman’s eyes; her back straightens, her lips pout. Her hair falls back as she lightly shakes her head, and it ripples in the gentle breeze from the fan. She’s a star, and Elin is too. Soon only the two of them exist, they’re absorbed in each other. Elin shoots and instructs, the woman laughs and flirts with her. Behind them the team applauds. The rush of creativity pounds through Elin’s veins.

Several hours pass before Elin finally forces herself to leave the studio and all the new shots requiring her attention on the computer. Her phone is full of missed calls and annoyed texts. From Sam, from Alice.

When are you going to be here?

Where are you Mom?

She scrolls through but doesn’t read all the words. She hasn’t the strength. She lets the taxis pass her in the vibrant Manhattan night. The asphalt still feels warm from the sun’s heat as she crosses the street. She walks slowly, past beautiful young people who laugh loudly, intoxicated. Sees other people sitting on the street, dirty, vulnerable. It’s a long time since she walked home, even though it’s so close. A long time since she moved beyond the walls of the gym, the studio, her home. The paving stones are uneven beneath her heels and she walks slowly, noting every detail along the way. Her own street, Orchard Street, lies deserted in the night, empty of people, empty of cars. It’s grimy and rough, like all the streets of the Lower East Side. She loves it, the contrast between outside and inside, between shabbiness and luxury. She takes a step into the lobby, passes the slumbering doorman unnoticed, and presses the button for the elevator. But when the doors open, she hesitates and turns around. She wants to stay out, to linger in the pulsating night. The others have probably gone to sleep anyway.

She unlocks her mailbox and takes the stack of letters to the restaurant a few doors down, the local she often goes to after late shoots. Once there, she orders a glass of 1982 Bordeaux. The waiter shakes his head.

“Nineteen eighty-two, we don’t serve that by the glass. We have only a few bottles. That shit’s exclusive. A good year.”

Elin shifts uncomfortably in her chair.

“All right, you’re worth it.” The waiter rolls his eyes. “We’re closing soon, by the way.”

She fingers the letters, laying aside the sealed envelopes until one catches her attention. The postmark is from Visby, the stamp Swedish. Her name has been written by hand in capitals, carefully spelled out in blue ink. She opens the envelope and unfolds the sheet of paper within. It’s some kind of star chart and on it her name is printed, in large ornate type. She holds her breath, reading the Swedish words above it.

On this day, a star was named Elin.

She reads the line again and again in the unfamiliar language. A long string of coordinates denotes the star’s precise whereabouts in the heavens.

A star someone has bought for her. Her very own star, which now bears her name. It must be from . . . can it really be . . . him, who sent it? She puts the brakes on her own thoughts, doesn’t even want to pronounce the name to herself. But she can picture his face clearly, his smile too.

Her heart is hammering in her chest. She pushes the chart away. Stares at it. Then she gets up and runs out into the street to look up at the sky, but she can see only a dark-blue featureless mass above the buildings. It’s never truly dark in New York, never enough to see the meandering muddle of the stars. The tall buildings of Manhattan almost touch the sky, but down on the streets it just feels distant. She goes in again. The waiter is standing by her seat, waiting, wine bottle in hand. He pours a splash into her glass and she downs it without noticing how it tastes. With an impatient wave of the hand she indicates that he should refill it, and takes two more large gulps. Then she picks up the star chart again and turns the shiny paper this way and that. In the bottom corner, against the dark background, someone has written in gold marker:

I saw your picture in a magazine. You look just the same.

Long time no see. Get in touch!

And underneath, an address. Elin feels her stomach cramp when she sees the place of origin. She can’t stop looking at it, her eyes filling with tears. She follows the contours of the letter F with her index finger and mouths his name. Fredrik.

Her mouth feels dry. She reaches for the wineglass and empties it. Then she calls the waiter over, loudly.

“Hello! Can I get a large glass of milk? I’m so thirsty, suddenly.”