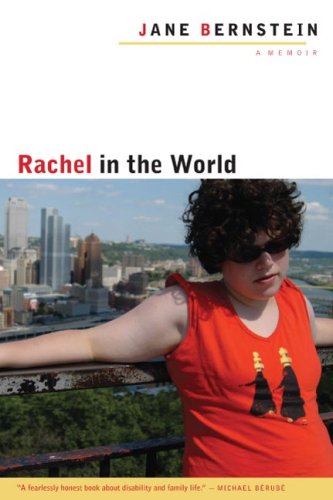 RACHEL IN THE WORLD

What happens when love is no longer enough? Jane Bernstein thought that learning to accept her daughter’s disabilities meant her struggles were over. But as Rachel grew up and needed more than a parent’s devotion, both mother and daughter were confronted with formidable obstacles.

Rachel in the World, which begins in Rachel’s fifth year and ends when she turns twenty-two, tells of their barriers and successes with the same honesty and humor that made Loving Rachel,

What happens when love is no longer enough? Jane Bernstein thought that learning to accept her daughter’s disabilities meant her struggles were over. But as Rachel grew up and needed more than a parent’s devotion, both mother and daughter were confronted with formidable obstacles.

Rachel in the World, which begins in Rachel’s fifth year and ends when she turns twenty-two, tells of their barriers and successes with the same honesty and humor that made Loving Rachel, Bernstein’s first memoir, a classic in its field. The linked accounts in part 1 center on family issues, social services, experiences with caregivers, and Rachel herself—difficult, charming, hard to fathom, eager for her own independence. The second part of the book chronicles Bernstein’s attempt to find Rachel housing at a time when over 200,000 Americans with mental retardation were on waiting lists for residential services. As Rachel prepares to leave her mother’s constant protection, Bernstein invites the reader to share the frustrations and unexpected pleasures of finding a place for her daughter, first in her family, and then in the world.

Jane Bernstein, a professor of English and creative writing at Carnegie Mellon University, is the author of Loving Rachel: A Family’s Journey from Grief, Bereft—A Sister’s Story, and other books.

“This sequel to Bernstein’s Loving Rachel: A Family’s Journey from Grief provides a rare, honest, even gritty glimpse into the life of a young person with the dual diagnosis of mental retardation and mental illness. . . . An unsentimental yet inspiring story of unshakable mother love.”
—Library Journal

“It’s a book I have been looking for, a road map for the years ahead.” —Houston Chronicle

“Bernstein details the agonizing process of finding a home and occupation for Rachel. The book makes it clear that we, as a society, are not set up to help people like her or their families, particularly as money for social services continues to dwindle. But what gives the book strength is Bernstein’s ability to write as expressively about the times when she herself was nearing madness as about her deep love for her daughter.”—Washington Post

“Bernstein follows her earlier memoir, Loving Rachel (1988), with an account of the challenges of raising a disabled child to full adulthood. . . . This is a candid and moving look at the challenges faced by the disabled and their families.”—Booklist

In the introduction of RITW, Jane tells a mother of a 14 year old with developmental disabilities that she will never write a second book about Rachel. What does the mother mean when she says in response, “Oh, you will. You wait and see.”

Several times Jane mentions that in the not so distant past, families were encouraged to institutionalize children with mental retardation claiming it was “best for the family.” What do you think is “best” for a family? Did your opinion change after reading RITW? What does Jane seem to be saying?

What do you think is a stranger’s responsibility toward someone with disabilities?

In “Rachel at Work,” what does Jane learn about the nature of work and of her dreams for Rachel? Why is it so important to Jane that Rachel work?

Jane tells a county employee, “If I don’t get a placement for my daughter… I’ll leave her on the doorstep.” Did you believe Jane might someday do this? What do you think of her threat?

Wendy, the supports coordinator who helped find housing for Rachel said, “I do this because I care…” Do you think she was different from the other professionals? In what way?

When Jane mentions Kishorit, the Israeli community for adults with developmental disabilities, she often reminds the reader that it was beautiful but “separate.” Is a place like Kishorit better than options in the US such as lifesharing or group homes in the community? Should Jane have sent Rachel there?

Why was Jane so opposed to “lifesharing” as an option for Rachel. Do you think her feelings of guilt got in her way?

An interviewer asked Jane, “If the choice were yours, would you have chosen for Rachel not to be born?” In this era, where some disabilities can be detected early, this is a question parents are asked to consider. What do you think of the question? What choice would you make?

Many parents keep their sons and daughters with developmental disabilities at home instead of seeking independent living situations for them because they fear their adult children are too vulnerable to abuse. Do you think Jane failed to fully consider these risks? How does a parents work to prevent abuse?

Jane uses “retarded” and “mental retardation” which many people shun in favor of “special needs,” or developmental disabilities? Why does she use it? What effects do these labels have on individuals?

The word “honest” has been used by many readers and reviewers of RITW. What do you think they mean? Does Jane’s “honesty” help in telling the story or does it get in the way of the readers’ ability to see things for themselves?

The subtitle of Rachel in the World is “a memoir,” but Jane says relatively little about her life apart from Rachel. Why do you think she made those choices and to what effect

Jane quotes a decree from the United Nations that states that “All people have a right to choose how they want to spend their lives, including those with mental retardation.” Do you think Rachel had the chance to choose how she wanted to spend her life or did Jane’s values dominate?

Do you know anyone with developmental disabilities? How well? Have any of your attitudes changed since reading RITW?