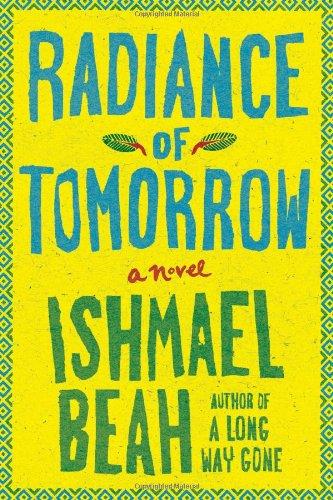 When Ishmael Beah’s A Long Way Gone was published in 2007, it soared to the top of bestseller lists, becoming an instant classic: a harrowing account of Sierra Leone’s civil war and the fate of child soldiers that “everyone in the world should read” (The Washington Post). Now Beah, whom Dave Eggers has called “arguably the most read African writer in contemporary literature,” has returned with his first novel, an affecting, tender parable about postwar life in Sierra Leone.

At the center of Radiance of Tomorrow are Benjamin and Bockarie,

When Ishmael Beah’s A Long Way Gone was published in 2007, it soared to the top of bestseller lists, becoming an instant classic: a harrowing account of Sierra Leone’s civil war and the fate of child soldiers that “everyone in the world should read” (The Washington Post). Now Beah, whom Dave Eggers has called “arguably the most read African writer in contemporary literature,” has returned with his first novel, an affecting, tender parable about postwar life in Sierra Leone.

At the center of Radiance of Tomorrow are Benjamin and Bockarie, two longtime friends who return to their hometown, Imperi, after the civil war. The village is in ruins, the ground covered in bones. As more villagers begin to come back, Benjamin and Bockarie try to forge a new community by taking up their former posts as teachers, but they’re beset by obstacles: a scarcity of food; a rash of murders, thievery, rape, and retaliation; and the depredations of a foreign mining company intent on sullying the town’s water supply and blocking its paths with electric wires. As Benjamin and Bockarie search for a way to restore order, they’re forced to reckon with the uncertainty of their past and future alike.

With the gentle lyricism of a dream and the moral clarity of a fable, Radiance of Tomorrow is a powerful novel about preserving what means the most to us, even in uncertain times.

Ishmael Beah was born in Sierra Leone in 1980. He came to the United States when he was seventeen and studied political science at Oberlin College, graduating in 2004. His first book, A Long Way Gone: Memoirs of a Boy Soldier, was a number-one New York Times bestseller and has been published in more than forty languages. Time magazine named it one of their Top 10 Nonfiction Books of 2007. Beah is a UNICEF Ambassador and Advocate for Children Affected by War; a member of the Human Rights Watch Children’s Rights Advisory Committee; an advisory board member of the Center for the Study of Youth & Political Violence at the University of Tennessee, Knoxville; a former visiting scholar at the Center for International Conflict Resolution at Columbia University; a senior research fellow at the Center for the Study of Genocide and Human Rights at Rutgers University; cofounder of the Network of Young People Affected by War (NYPAW); and president of the Ishmael Beah Foundation. He has spoken before the United Nations, the Council on Foreign Relations, and many panels on the effects of war on children. He lives with his wife in New York City.

“Written with the moral urgency of a parable and the searing precision of a firsthand account . . . There is an allegorical richness to Beah’s storytelling and a remarkable humanity to his characters. We see tragedy arriving not through the big wallops of war, but rather in corrosive increments.”—Sara Corbett, The New York Times Book Review

In Radiance of Tomorrow, Beah has produced a formidable and memorable novel—a story of resilience and survival, and, ultimately, rebirth.”—Edwidge Danticat, Publishers Weekly

the beauty and dignity of traditional ways.”—Kirkus Reviews

our heroes (like Beah himself) stay radiant to the end.”—Library Journal

As you read the opening scenes, what did you discover about the reasons Mama Kadie and Pa

Moiwa returned to their village, despite the tragedies that occurred there? Do you feel a similar

connection to your homeland? How do you feel about your community or homeland?

How are the people of Imperi sustained by their relationship to the natural world? When their

water supply becomes contaminated, how does this reflect the other contaminations—spiritual,

emotional, and physical—of their community?

Discuss the role of education in rebuilding Imperi. What fosters the students’ respect for their

teachers? How do uniforms and other mandates keep the schools from being truly “public”? Is the

principal, Mr. Fofanah, a sinister man or simply a skilled survivor? What accounts for the corruption within the

the mines? How is their friendship affected by their decision? What are the consequences for a

society that has essentially no middle class?

How did you react to Colonel’s approach to security? For his fellow villagers who survived the

atrocities of civil war, what determines the difference between being paranoid and being naïve?

How is family life in Imperi distorted by the raiders and the mining company? What do you predict for the “tomorrow” generation of Miata and Abu?

What did the novel’s elders teach you about living and leading?

colorful images say about the way a community can experience the world?

Chapter 8 describes the vulnerability of women as the village itself becomes vulnerable to outsiders. As rape and prostitution rise, parents recall a time when they didn’t fear letting their daughters

go out simply to fetch water. How is the power of Imperi’s women transformed throughout the

What will be the legacy of villagers like those featured in the novel, even as the modern world

threatens to erase their traditions? Is the Western materialism described in the book—from cell

as a parable, what is its lesson?

For decades, writers have exposed numerous incidents of devastation wrought by mining. In

than thirty striking workers during a protest at the Lonmin platinum mine in Marikana. As consumers, what can we do to become agents for change?

Discuss Kula’s tale, which forms the novel’s closing scene. As a reader, how would you describe

the necessity of storytelling? How did

enrich your experience of Ishmael