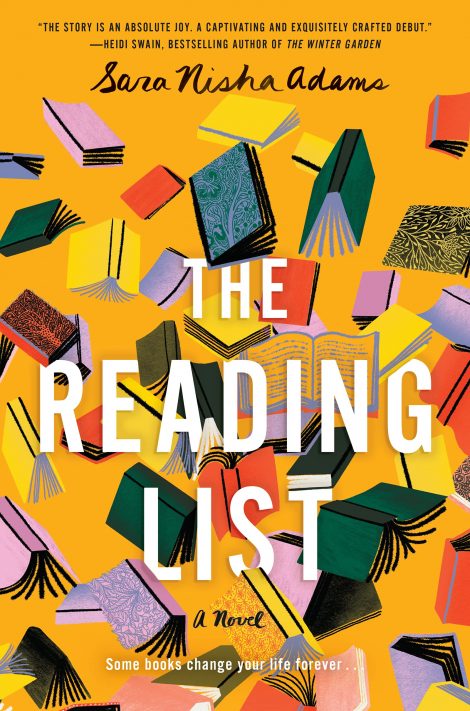 An unforgettable and heartwarming debut about how a chance encounter with a list of library books helps forge an unlikely friendship between two very different people in a London suburb.

Widower Mukesh lives a quiet life in Wembley, in West London after losing his beloved wife. He shops every Wednesday, goes to Temple, and worries about his granddaughter, Priya, who hides in her room reading while he spends his evenings watching nature documentaries.

Aleisha is a bright but anxious teenager working at the local library for the summer when she discovers a crumpled-up piece of paper in the back of To Kill a Mockingbird.

An unforgettable and heartwarming debut about how a chance encounter with a list of library books helps forge an unlikely friendship between two very different people in a London suburb.

Widower Mukesh lives a quiet life in Wembley, in West London after losing his beloved wife. He shops every Wednesday, goes to Temple, and worries about his granddaughter, Priya, who hides in her room reading while he spends his evenings watching nature documentaries.

Aleisha is a bright but anxious teenager working at the local library for the summer when she discovers a crumpled-up piece of paper in the back of To Kill a Mockingbird. It’s a list of novels that she’s never heard of before. Intrigued, and a little bored with her slow job at the checkout desk, she impulsively decides to read every book on the list, one after the other. As each story gives up its magic, the books transport Aleisha from the painful realities she’s facing at home.

When Mukesh arrives at the library, desperate to forge a connection with his bookworm granddaughter, Aleisha passes along the reading list…hoping that it will be a lifeline for him too. Slowly, the shared books create a connection between two lonely souls, as fiction helps them escape their grief and everyday troubles and find joy again.

Sara Nisha Adams is a writer and editor. She lives in London and was born in Hertfordshire to Indian and English parents. Her debut novel The Reading List is partly inspired by her grandfather, who lived in Wembley and immediately found a connection with his granddaughter through books.

A BEST OF SUMMER READ ACCORDING TO NEWSWEEK, PARADE MAGAZINE, NBC NEWS, LITHUB, AND POPSUGAR!

“The most heartfelt read of the summer…a surprising delight of a novel.”—Shondaland

“A quietly beautiful novel about the magic of books and the joy of human connection.” — Newsweek

“A remarkable, heartwarming debut about the power of fiction.” — Popsugar

“Thoughtful and heartwarming… An absolute delight to read, it will be catnip to book groups craving a story to remind them why we read and how very important libraries and book shops are.” — Library Journal (starred review)

“A lovely story about how a love of reading can transport us to other worlds and also bring us together.”  — Toronto Star

“The story is an absolute joy. A captivating and exquisitely crafted debut.”  — Heidi Swain, bestselling author of The Winter Garden

The doors are new: Automatic open. Fancy. That has changed since Aidan was here last. The first thing he notices are the sparse rows of books—when he’d been younger, smaller, the shelves seemed to never end, teeming with books of all shapes and sizes. Even when he’d been a teenager, working here over his summer holidays, this place had been a sanctuary for him and, though he’d never have admitted it to his friends, he’d loved getting lost between the stacks and stacks of reference books. Maybe he is just looking back with rose-tinted spectacles, imagining some kind of magical, bookish wonderland that has never really existed. But now, at twenty-two, no longer a boy but a man, here he is again, looking for a place to hide—from the world, his friends, his family.

The librarian looks up for a moment as he steps through the doors, and smiles. Aidan is greeted by silence. In his memories, this place was never silent. Obviously, it is a library . . . so it has always been quiet, but there had been that hum—of people shuffling about, of kids whispering to their mums, people flicking pages, moving chairs, wiggling around, coughing and snuffling too. Today, barely a sound. Someone tapping out a text on their phone. The librarian drumming away on that clunky old keyboard. Nothing else. Recently, he has spotted posters about saving Brent’s libraries stuck up on community boards: in Tesco; at the gym; even plastered near the Tube station, advertising cake sales, knitting clubs at the library, sit-ins, petitions. But it has never crossed his mind that Harrow Road Library needs saving. In his mind, it is popular, well loved, but now that he is here, his heart begins to sink . . . Maybe Harrow Road Library will be the next to go.

He wanders over to the fiction shelves, the crime section, and runs his fingers over the spines, landing on Black Water Rising by Attica Locke. He has read it before, years ago. Maybe even more than once. As he starts to turn the pages, looking for an escape, memories rush in . . . of Attica Locke’s Houston, the city alive, vibrant, dark, full of contradictions and contrasts. Today he needs that kind of familiarity, he needs to step back into a world where there are scares, twists, turns, but a world where he knows how everything will end.

He needs to know how something will end.

The table he’d once curled up under as a kid is gone, everything rearranged. Nothing was going to stay the same just to please him, not here, not in his life. This is another bad summer. But as the words of the story wash over him, he traces the sentences with his fingers, trying to re-create that feeling of being grounded, rooted to the spot, nothing more than a body, reading words, allowing his mind to wander elsewhere. He can feel the story take control of his mind, pulling him away. His own thoughts, his worries, that voice, begin to buzz at the back of his mind, and eventually they become nothing but white noise.

When he was younger, his mum would bring him here with his little sister, Aleisha; Aleisha was always more interested in playing and she’d kick and she’d fuss and Leilah would have to take her outside. Aidan would never have more than a few minutes of alone time, but those few minutes calmed him, they stopped his mind racing, they helped him breathe, escape . . . whatever he needed most.

A loud thwack alerts him to someone beside him. He averts his gaze, keeping his eyes on the page, unwilling, for now, to allow someone else to break his spell. Out of the corner of his eye, he spots a large stack of books piled high. A barricade.

There’s the scraping of a chair, and scraps of paper are pulled from a bag, creased receipts, a library slip, the back of a crossword puzzle, leaving a crumpled cloud of white on the desk beside him.

He tries hard to quiet his breathing as his neighbor begins to mutter almost inaudibly. He can’t tell if it’s a song, or a tune, or complete nonsense. He spots a pen poised above the first scrap; then follows the rhythmic scratching.

Aidan keeps his eyes fixed on the page, running over the words in his book, taking them in, trying to conjure up the feeling he’d had the last time he’d read these words in this order.

For minutes, Aidan allows his focus to flow in and out of the book, into the library, and then out onto the road, over to Wembley. He wonders how his mum is doing now. Has Aleisha noticed he’s vanished? He brings his mind back to the room, back to the library, to the person sitting beside him, scribbling as if their life depends on it.

And then, suddenly, his neighbor stands up abruptly, leaving a heap of little folded pieces of paper littering the desk. He watches from the corner of his eye as slips of paper are pulled into a line, as if in slow motion, a finger tapping each one in turn . . . counting one, two, three, four, five, six, seven, eight . . . Then the scraps are all tucked away into the first book, at the top of the pile—he sees now that it is To Kill a Mockingbird.

His neighbor’s hands rest for a moment on the cover of the book. Aidan realizes he hasn’t turned his page in a while. He wonders if they realize he’s watching. He wonders why he’s watching at all. Then, a moment later, their arms, wrapped in a thick black sweater, reach forward and pull the books toward them. With a soft groan, the pile of books is swept from the corner of his eye and he hears the swoosh-swoosh of shoes against the tacky library carpet, shuffling toward the front desk. He allows his mind to return to his story.

When he eventually stands up from his chair, the evening light is streaming through the window, and the library looks exactly how he remembers it: magical. It feels like a miracle, but he’s never believed in those before. The sun is casting long shadows on the scruffy library, dousing everything in a warm amber—it looks as if it has been carved out of gold. He tucks his chair in, lifting it up, trying not to make a sound—though there is barely anyone left here to disturb.

Then he spots one lonely folded scrap of paper sitting on the desk beside him—the crossword puzzle.

For a moment, he turns his head to the left, to the right, and slowly over his shoulder. No one is watching him. His arm reaches forward, pulling it toward him, and he unwraps it—one fold at a time. His fingers treat it delicately; it is barely thicker than a cigarette paper. He doesn’t want to break it. He thinks of the person, his anonymous neighbor, writing, scrawling, intent.

As he unfolds the final corner, the mystery is suddenly revealed. The lettering is neat, looping, warm, inviting.

Just in case you need it:

To Kill a Mockingbird

To Kill a Mockingbird—the first book in the massive pile. He runs his eyes down the list. It doesn’t mean anything to him—just scribbled words on a scrap of paper. But, for a moment, he thinks about taking the list with him, popping it in his pocket, but he stops himself. This small scrap of paper, so neatly folded, is nothing more than a stranger’s reading list. What does he need with something like this?

Instead, he lays it back on the table, and picks up his book, sending Attica Locke a secret thank-you, and tucks it back on the crime shelf, for someone else to enjoy. He heads out of the library, the doors closing automatically behind him. He turns once more, and he can see the note sitting exactly where he left it. The shadows of the library close in behind him; the books read and unread forming a barrier between him and the list. As he steps away from the library, he feels the peace, the silence, slide away from him as he heads toward the lights and sounds of the city he calls home.