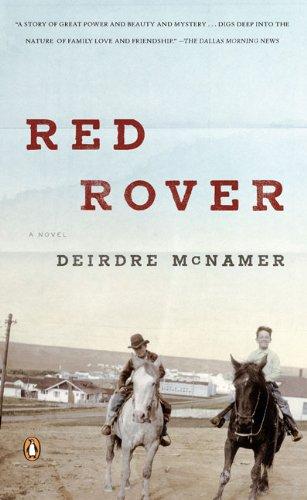 Deirdre McNamer’s first novel in seven years, Red Rover tells the story of three Montana men who get swept up in the machinations of World War II and its fateful aftermath. As boys, Aidan and Neil Tierney ride horseback for miles across unfenced prairie, picturing themselves as gauchos, horsemen of the Argentine pampas. A hundred miles away, Roland Taliaferro wants only to escape the violence and poverty of his family. As war approaches, Aidan and Roland join the FBI. Roland serves Stateside while Aidan—in a gesture as exuberant as a child in a game of Red Rover—requests hazardous duty and is sent as an undercover agent to Nazi-ridden Argentina.

Deirdre McNamer’s first novel in seven years, Red Rover tells the story of three Montana men who get swept up in the machinations of World War II and its fateful aftermath. As boys, Aidan and Neil Tierney ride horseback for miles across unfenced prairie, picturing themselves as gauchos, horsemen of the Argentine pampas. A hundred miles away, Roland Taliaferro wants only to escape the violence and poverty of his family. As war approaches, Aidan and Roland join the FBI. Roland serves Stateside while Aidan—in a gesture as exuberant as a child in a game of Red Rover—requests hazardous duty and is sent as an undercover agent to Nazi-ridden Argentina. Neil becomes a B-29 bomber pilot.

Aidan returns to Montana ill, shaken, and divided from Roland over the FBI’s role in the war. On a cold December day in 1946, he is found fatally shot, an apparent suicide. The FBI stays silent. Only when Neil and Roland are very old men, meeting by chance in a rehabilitation facility, does Aidan’s death become illuminated, atoned for, and fully put to rest. This beautifully crafted, far-ranging novel will catch readers up in the grace and hard truths of the lives it unfolds.

Deirdre McNamer grew up in Montana and now lives in Missoula, Montana. She received her M.F.A. from the University of Montana, where she is a professor of English. Her stories and essays have appeared in The New Yorker, Ploughshares, Doubletake, and The New York Times Book Review. Her previous three novels are Rima in the Weeds, One Sweet Quarrel, and My Russian.

“…a haunting novel of love, friendship and faith set in a world where none of those values triumphs. McNamer’s insight into her damaged cast generates a deep emotional response that builds toward a reunion and revelation that bring satisfaction, if not peace.”
—Publishers Weekly (Starred Review)

“…[readers] will be drawn into the carefully crafted mystery and the complex internal lives of the characters. Recommended.” —Library Journal

“Ms. McNamer’s novel is vividly observed and original (actually entirely engrossing) in its conception. She’s a wonderfully smart and surprising sentence-writer, and the burnish on this work has left not a word out of place. This is ‘the novel as story-telling.’ And it is of a very high order.”—Richard Ford, author of The Sportwriter, Independence Day, and
The Lay of the Land

“Red Rover by Deirdre McNamer is a rare and considerable achievement, stunning actually. This is a truly impressive novel. She is a master weaver of prose.”—Jim Harrison, author of The Legends of the Fall

The relationship of the first two chapters of Red Rover to the remainder of the novel is not immediately obvious. What do the accounts of Neil’s riding accident and his bombing mission over Japan contribute to McNamer’s story? What would the effect be if they had not been included?

Red Rover continually presents scenarios in which its characters experience extreme risk. Often, they seek out these risks voluntarily, as if to supply some quality that is otherwise missing from their lives. How does the novel as a whole address the relationship between risk and personal fulfillment?

In his time, Charles A. Lindbergh, who makes a brief appearance in Red Rover, achieved a heroic status that is now almost beyond comprehension. More recently, his reputation has suffered because of his political isolationism and his rumored sympathies with Germany during World War II. How do the gray areas one associates with Lindbergh relate to the moral ambiguities in McNamer’s novel?

The other historical figure whose career exerts a strong influence in Red Rover is FBI director J. Edgar Hoover. How are Hoover’s values and priorities reflected in such characters as Wendell Whitcomb and Roland Taliaferro, and to what extent is he responsible for the personal tragedies that lie at the core of Red Rover?

Red Rover is a novel of the American West. However, the story that it tells sometimes runs contrary to some of the stereotypic images we may have regarding Western living. How does the novel either confirm or challenge accepted notions of the West?

Deedee Valentine, a minor character in Red Rover, never speaks in the novel. Nevertheless, McNamer is able to sketch a portrait of her that makes readers care about what becomes of her. How, with so few strokes, is McNamer able to bring Deedee to life?

Like Deedee, the children of previous generations in Red Rover devise amusements that expose them to unnecessary danger. How does comparing the chosen pastimes of the Tierney boys, Wendell Whitcomb, and Deedee reveal the changing nature of childhood in America?

Roland Taliaferro feels strong loyalty to the FBI, whereas Aidan Tierney experiences crushing disillusionment. How do the characters and experiences of these two men, as well as the circumstances of their early lives, cause them to have such disparate reactions to the Bureau?

Seen through the eyes of his admiring younger brother and consistently evincing idealistic values, Aidan Tierney enjoys a revered status throughout much of Red Rover. Nevertheless, does he possess character flaws? If so, what are they, and how do they contribute to his death?

Opal Mix, the coroner who botches her report on Aidan, is professionally incompetent and emotionally unbalanced, to say nothing of her role as an enabler for her husband’s pedophilic leanings. In spite of all this, does McNamer create some degree of sympathy for her? How so?

Two minor characters in Red Rover die because their loved ones are unable to discern the seriousness of their conditions. What comment do you think McNamer may be making in the novel about the limits of people’s abilities to understand one another’s suffering?

At the end of Red Rover, Roland Taliaferro acts impulsively in an attempt to redeem himself for his earlier betrayal of the Tierney family. In your estimation, does he succeed or does his debt remain unpaid?