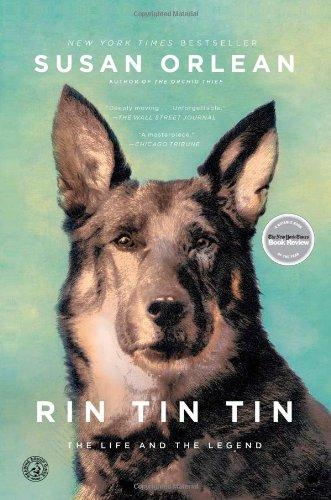 The Life and the Legend

In Rin Tin Tin: The Life and The Legend, Susan Orlean traces the journey of Rin Tin Tin from a puppy on a French battlefield to an international brand, a set of ideals, and a legacy that has passed down from generation to generation. The narrative delves into the history of dogs in the military, obedience training and animal domestication, shifting social mores, and film and television history, all while keeping a steady hold on the personal stories of Rinty and the people who loved and trained him.

Lee Duncan, a young American soldier, first stumbled across the newborn Rin Tin Tin in a bombed out animal shelter in the fields of France.

In Rin Tin Tin: The Life and The Legend, Susan Orlean traces the journey of Rin Tin Tin from a puppy on a French battlefield to an international brand, a set of ideals, and a legacy that has passed down from generation to generation. The narrative delves into the history of dogs in the military, obedience training and animal domestication, shifting social mores, and film and television history, all while keeping a steady hold on the personal stories of Rinty and the people who loved and trained him.

Lee Duncan, a young American soldier, first stumbled across the newborn Rin Tin Tin in a bombed out animal shelter in the fields of France. Lee took Rinty back to America, and, through a twisting path of luck and devotion, Rin Tin Tin became a Hollywood icon. The idea of Rin Tin Tin grew from the values embodied by a single dog in silent films into something much bigger than Lee had perhaps imagined—into an idea, an emotion, a character residing in national and international consciousness.

Susan Orlean has been a staff writer at The New Yorker since 1992. She is the author of seven books, including Rin Tin Tin, Saturday Night, and The Orchid Thief, which was made into the Academy Award–winning film Adaptation. She lives with her family and her animals in upstate New York.

“Epic . . . Heartfelt . . . An enormously satisfying story about a dog and the man who believed in him.”—Carol Memmott, USA Today

Were you familiar with Rin Tin Tin before reading this book? What memories do you have of the famous dog? What was it like to delve back into the history of Rin Tin Tin? If this was your first introduction to him, what impressions did the book give you?

Orlean attributes Lee’s fierce love of dogs to his traumatic childhood, in which both his mother and father abandoned him for a time. As Orlean writes: “The experience shaped him; for the rest of his life, he was always deeply alone…The only companion in his loneliness he would ever find would be his dog, and his attachment to animals grew to be deeper than his attachment to any person.” (p. 15) Do you agree with this assessment? What other forces, if any, contributed to Lee’s love of dogs?

Lee and the first Rin Tin Tin shared an incredibly close bond. Do you think Lee’s devotion to Rinty was more of an endearing character trait, or a symptom of deeper personal issues? Consider the many people who felt wronged or resentful toward Lee—his daughter Carolyn, his wife Charlotte, and his wife Eva, in your answer.

Lee steadfastly believed that Rinty was destined for greatness and, as Orlean writes, “he was lucky to be his human guide and companion.” (p. 34) Do you think Lee underestimated, or misunderstood, his importance in creating the Rin Tin Tin juggernaut?

On the strangely frequent coincidences that kept Rin Tin Tin’s narrative alive, Orlean writes, “Everything connected to Rin Tin Tin was full of happenstance and charm, lightning strikes of fortune and hairpin turns of luck; from a standstill, life around Rin Tin Tin always seemed to accelerate out of the depths of disappointment to a new place filled with possibility.” (p. 262) Reflect on a few such serendipitous moments. Do you think life tends to look coincidental in hindsight—or was Rin Tin Tin’s story really blessed?

Although he never made concrete plans to ensure the continuation of Rinty’s legacy, Lee insisted that “There will always be a Rin Tin Tin.” (p. 3) Was Lee being prophetic or delusional—or both?

The original Rin Tin Tin was considered essentially human in popular culture. A review of one of his films, for example, describes his eyes as conveying something “tragic, fierce, sad and…a nobility and degree of loyalty not credible in a person.” (p. 71) Why was Rinty so completely and earnestly anthropomorphized by millions of fans? Where do you stand on the scale from “a dog is a dog” to “Rin Tin Tin was essentially human”?

Orlean notes that “when Rin Tin Tin first became famous, most dogs in the world would not sit down when asked.” (p. 123) With that in mind, how much of the awe and reverence surrounding Rin Tin Tin the first would you attribute to the novelty of trained dogs? How much stands the test of time?

At the height of his earning power, Rin Tin Tin was paid eight times as much as his human co-stars. Do you think this was fair? Why or why not?

Orlean writes that Rin Tin Tin, alive on the screen, “was everything Americans wanted to think they were—brave, enterprising, bold, and most of all, individual.” (pp. 87, 89) How much of Rin Tin Tin’s emotional depth do you think came from viewers projecting their own feelings on him?

Orlean writes, “As his fame grew, Rin Tin Tin became, in a way, less particular—less specifically this one single dog—and more conceptual, the archetypal dog hero.” (p. 97) In what ways did Rin Tin Tin shift from a literal representation to a symbolic figure? What specific moments, if any, highlight this shift?

How did the evolution of the film and television industries dictate the various reincarnations of Rin Tin Tin? Why was Rin Tin Tin—the dog and the archetype—so wildly successful, both in films and later in television?

By the late 1950s, Rin Tin Tin’s aura of invincibility was beginning to wear off. Orlean explains, “Now, instead of being a miracle, he was a model. He was the dog you could aspire to have, and maybe even manage to have, at home.” (p. 217) What explains this shift? Is it necessarily a bad one?

The criteria used to determine Rin Tin Tin’s descendants evolved as the Rin Tin Tin ideal expanded through time and across mediums. As Orlean concludes, “The unbroken strand is not one of genetics but one of belief.” (p. 137) Why did this evolution from genetics to belief occur? Do you think this reliance on human decisions, rather than canine pedigrees, undermines the magical reverence of Rin Tin Tin the first?

Orlean writes that at one point she felt like “everybody I met or heard about in connection to Rin Tin Tin was a little crazy.” (p. 282) Do you agree? Why or why not? Consider the various actions that Lee, Burt, and Daphne took in the name of defending Rin Tin Tin’s legacy.

Bert takes over as the protagonist of the book after Lee dies. How do you feel about the way the narrative continues after Lee’s death?

What do you think Lee and Bert would have thought of this book?

Orlean wonders, of the many different iterations of Rin Tin Tin, “Could that wide, wide range of manifestations really belong to anyone?” (p. 297) What do you think? If yes, who owns which parts of the legacy—legally, sentimentally, practically? Do you think Orlean herself now owns a part of the legacy, too?

Orlean writes that she sometimes “began to wonder if the legacy of RTT was finally contracting.” (p. 311) What do you think? How does her book factor in this observation?

Orlean delves into many historical events and movements in the book—dogs in the military, obedience training, movie and television history—to name a few. Which facts surprised you the most?

Do you believe that there will always be a Rin Tin Tin? Why or why not?