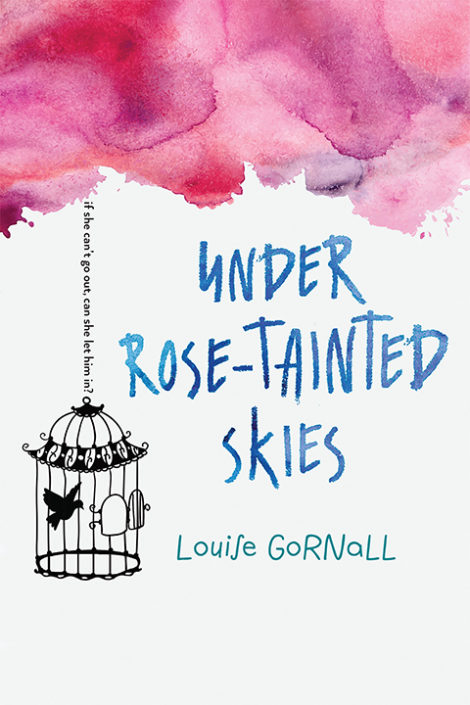 Norah has agoraphobia and OCD. When groceries are left on the porch, she can’t step out to get them. Struggling to snag the bags with a stick, she meets Luke. He’s sweet and funny, and he just caught her fishing for groceries. Because of course he did.

Norah can’t leave the house, but can she let someone in? As their friendship grows deeper, Norah realizes Luke deserves a normal girl. One who can lie on the front lawn and look up at the stars. One who isn’t so screwed up.

Under Rose-Tainted Skies is a funny,

Norah has agoraphobia and OCD. When groceries are left on the porch, she can’t step out to get them. Struggling to snag the bags with a stick, she meets Luke. He’s sweet and funny, and he just caught her fishing for groceries. Because of course he did.

Norah can’t leave the house, but can she let someone in? As their friendship grows deeper, Norah realizes Luke deserves a normal girl. One who can lie on the front lawn and look up at the stars. One who isn’t so screwed up.

Under Rose-Tainted Skies is a funny, affecting, inspiring tale about hope and self-acceptance, and this YA debut combines an appealing romance with a wry, insightful view of mental illness for something truly special. 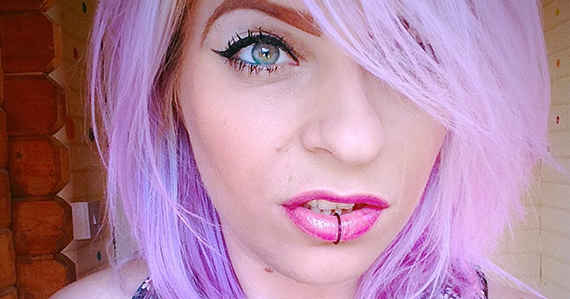 A junk food enthusiast, film nerd, and rumored pink Power Ranger, Louise Gornall writes about her own experiences to help encourage and facilitate conversations with other people also facing challenges with mental illness. She lives in England.

“Thoughtful, heartbreaking, and at times laugh-out-loud funny, Louise Gornall tells a fearless story from the perspective of someone who doesn’t yet recognize her own bravery. In this unflinchingly honest debut, Gornall portrays the reality of living with mental health issues and phobias, bringing readers into the tight orbit of an unforgettable protagonist they’ll both learn from and cheer for.”—Laurie Elizabeth Flynn, author of Firsts

“A love story set against the backdrop of debilitating mental illness, this debut novel is a poignant work, infused with humor, self-doubt, and, eventually, self-acceptance.” —School Library Journal

1. Talk a little about Norah’s own description of her agoraphobia and OCD throughout the novel. Initially, how does Norah think the outside world perceives her (and her mental illness), and what does that say about her as a character?

2. Norah immediately displays a smart sense of humor both about her situation and about the world around her. What is your take on her use of humor to adapt to her circumstances and the positives and negatives of this behavior?

3. In Under Rose-Tainted Skies, we see Norah commit self-harm. What reasons does she give for doing this? Are the reasons she gives for hurting herself what you’d expect?

4. Talk about Norah’s support system (her mother, Doctor Reeves, and Luke). What are some of the different ways each of these individuals (and Norah’s responses to these characters) offer unique insight to Norah’s character?

5. Would you consider Norah and Doctor Reeves’s relationship to be healthy? Does Doctor Reeves reinforce your existing opinion of therapists and therapy, or does it change it? If so, how?

6. How does Luke impact Norah’s life as their relationship begins? What aspects of Luke’s life make him sympathetic towards Norah’s mental health? If these aspects didn’t exist, how do you think he might treat Norah differently?

8. Despite Norah’s specific mental health concerns, some of her biggest challenges are very universal – dealing with a feeling of being an outsider and learning to accept herself as she is (flaws and all). What about Norah’s story feels most relatable to you, and what personal insights (if any) have you taken away from the read?

I’m going to kill the damn blackbird sitting on my windowsill, chirping and squeaking at the top of its lungs. It hops back and forth, wings spread and flapping, but has zero intention of taking off.

The point is, it can fly away whenever it wants. And it knows it can. It stops chirping, turns its tiny head, and looks at me. Smiling for sure.

I pick up my pillow and lob it at the window. It crashes against the glass then plops onto my window ledge, catching a pile of books as it dies a deflated death on my bedroom floor.

The blackbird is unperturbed, but it pales into insignificance as my eyes home in on my copy of The Picture of Dorian Gray. Its corner is now ever so slightly out of line with the books beneath it.

It’s the Reader’s Choice edition. Two hundred and twenty-eight pages exactly. Just like the five books under it. To the left is another pile of six books. They all have two hundred and seventy-two pages. The book on top of that pile is Pride and Prejudice, the Dover Thrift edition.

“Norah,” Mom bellows up the stairs. “If you don’t get your butt down here in the next ten seconds, I’m canceling the Internet service.” I’ve been testing her patience for the last twenty minutes.

“I still have a stomachache,” I call back. There’s a pause, and I think maybe she’s giving up on the idea of making me go outside.

“I don’t care if you have the bubonic plague.” Pause. Inhale courage. Exhale guilt. “If you’re not down these stairs in the next eight seconds, you can kiss your Internet connection goodbye.” Her voice cracks, but wow, she’s really taking this whole “tough love” approach seriously. I don’t think she’s an enabler, but ever since she watched Doctor Motivator and his know-nothing special on mental health, she’s been grappling with her conscience.

To her, at least. I look back at the books, see a crumbling tower, a broken wall. Dr. Reeves is in my head, telling me to test myself, telling me to leave the discombobulated book as it is and observe how the world does not collapse around me.

I huff a breath, climb off the bed, pick up my pillow, and place it back where it belongs. It’s one of four. They all sit angled, diamond shapes, on top of my military-smooth bed sheets.

But before I hit the stairs, that tiny corner, no longer in line with the other five books, is consuming me. Like that song you heard but can’t quite remember the name of. Or that actor you’ve seen in another film but can’t for the life of you recall which one. The thought is a fungus, a black mold rotting my brain. I ache. My teeth itch.

I stand at the top of the stairs, close my eyes, and try to make my mind go blank.

Here’s the thing. The blankness in my mind turns into a piece of white paper, the white paper reminds me of books, and then I’m thinking about The Picture of Dorian Gray again. Fuck.

I march back to my room, push the book to its rightful position, and then hate myself.

The blackbird catches my eye. It hasn’t budged. Bet it knew I would be back. I slam my fist into the window and shout, “Boo!” It shrieks and takes to the skies. I smile. Throw it a sarcastic five-fingered sayonara wave. It’s a small but satisfying victory.

Then I see a boy through my window. He’s stopped halfway up the garden path and is looking at me like I’ve lost my mind. He’s carrying a box labeled Bedroom. I take note of bulging biceps testing the durability of his shirtsleeves.

Why has he stopped? Am I supposed to smile? Wave? Throw him a thumbs-up? I feel like an idiot.

It’s awkward; we’re both just staring at each other until a woman in a floaty summer dress sails outside. He’s distracted, so I slip away.

Like a giant in cast-iron shoes, I make my way down the stairs. Eleven steps, so I have to take the last one twice. I have this thing about even numbers.

You don’t have to take the last one twice, Dr. Reeves would say.

But I do, I’d tell her. Then she’d ask me why, and I would say, as I always do, Because that’s the way my mind works.