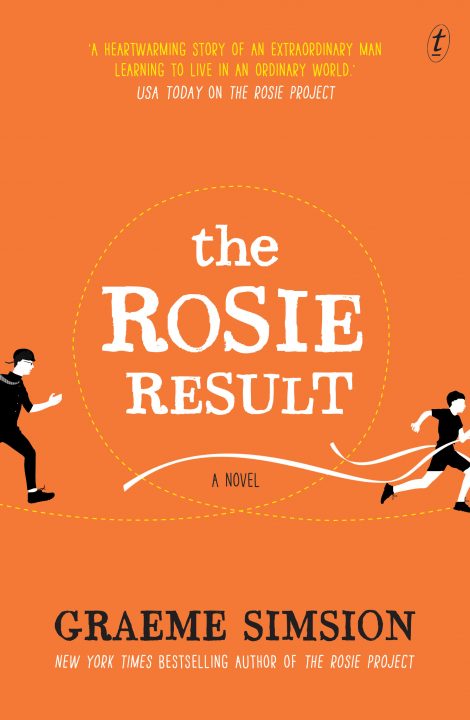 In The Rosie Project, the first book in the trilogy, Don Tillman gives a lecture on Asperger’s Syndrome. This sets up the premise that Don has autistic traits but doesn’t recognize them in himself. By the end of The Rosie Result, though, both Don and his son Hudson identify as autistic.

If the storylines in The Rosie Result center on Don’s challenges in trying to parent a son who shares many similarities with him, the novel’s main theme is labeling and identity. The book directly questions many people’s assumptions about autism.

In The Rosie Project, the first book in the trilogy, Don Tillman gives a lecture on Asperger’s Syndrome. This sets up the premise that Don has autistic traits but doesn’t recognize them in himself. By the end of The Rosie Result, though, both Don and his son Hudson identify as autistic.

If the storylines in The Rosie Result center on Don’s challenges in trying to parent a son who shares many similarities with him, the novel’s main theme is labeling and identity. The book directly questions many people’s assumptions about autism. Questioning on this issue can be found throughout The Rosie Result, including in Don’s thoughts. Should he and Rosie have Hudson assessed? What are the benefits and disadvantages of a diagnosis? Should autistic people have to adjust their behavior and thinking to match neurotypical norms? Does it make their lives better or worse if they do?

As Don ponders these questions, he is trying to be the best parent he can be. He remembers his own experiences as a child and an adult, and wonders what would have made things better for him. He starts thinking about his father, understanding and valuing some of what his father did for him, but also trying to come up with a new and better way to be a parent to Hudson. Don realizes that Hudson is similar to him, but not the same.

“Fiction as good as it gets, truly taking you into another world — and laugh-out-loud funny as well.”—Nicholas Kristof’s NYT newsletter

“Incredibly funny and life-affirming…the ultimate celebration of being different, and the importance of acceptance. ***** “ Heat [UK]

“A charmer… with everything coming to a proper close.”—Kirkus

“Simsion tackles some of the heavy issues…but his light touch makes this novel a fun and satisfying read.”—Sunday Express Magazine [UK]

“Simsion returns to comic form seamlessly, pitting Don against his greatest challenge: parenting…The Rosie Result will make readers fall in love with the series all over again.”—Shelf Awareness

1. Much of the humor in the Rosie books comes from Don misreading social situations and cues. How does Simsion make us laugh at Don’s interpretations and the comedy that follows from them without making us laugh at Don himself? Or doesn’t he?

2. Don has previously not seen himself (or perhaps not allowed himself to see himself) as autistic. Why does that change in The Rosie Result? Why has Simsion decided to have Don be open to the idea of himself as autistic?

3. How do you think the changes in how people understand autism in the last few years since the first Rosie book was published are reflected in The Rosie Result?

4. When trying to work out whether Hudson fits on the autism spectrum, Don sets his behavior against common ideas about how autistic people behave. For example, when Hudson makes a plan to secretly take Blanche to an eye doctor, Don contrasts that with the idea that “autistic people are poor at deception” (191). How do Don, Hudson, and Blanche conform to and challenge stereotypes of autistic people? What does this say about the similarities and differences between autistic people?

6. Don is “conscious of the human propensity to see patterns where they do not exist” (1). Does Don share this trait? Do you agree that it is an essentially “human propensity”? Is it a necessarily bad trait?

7. Don values rational thinking as “arguably life’s most important skill” (117), and sees emotion as its opposite (182). What do you think?

8. Rosie imitates Don as a “sign that she’s in a good mood” (2). Does Rosie make fun of Don? Is that okay? Does Rosie seem happy in her relationship with Don?

9. Don fixes on the idea of “If I knew then what I know now” (87) as a way to help Hudson—by explaining the wisdom he has gained over the years. Can any parent deliver this wisdom to their children?

10. When thinking about his parenting, Don thinks about what he would have wanted at Hudson’s age, and decides “I would have wanted to be treated as an adult . . . to be properly informed, listened to, and involved in decisions affecting me” (73). Is this what most children want? Is it possible to give it to them?

11. Discuss what else the book says about parenting. Consider, for example, Don’s recognition that he needs to “outsource” some of the support he gives Hudson. Or how one’s parenting is influenced by one’s own parents.

12. Professor Lawrence tells Don that as a “straight, white, middle-aged male who’s spent his life in top western universities”, he is “the definition of privilege” (23). Do you agree? Does his autism affect his status?

13. One of the themes of The Rosie Result is the sexism that many working women encounter, and Rosie herself works hard to balance her roles. What do you think the novel says about women’s roles?

14. How does Simsion use debates typical of the “culture wars”—such as the Genetics Lecture Outrage and the treatment of women in the workplace—both to illustrate Don’s character and to make political points?

16. Don has spent a lifetime trying to fit in (368), but eventu- ally realizes he doesn’t want Hudson to have to do the same. How much should people—whether autistic or neurotypical—try to “fit in” and modify their behavior to get along with others? How much should the world accommodate difference?

17. If Hudson hadn’t had the “fitting in” lessons from Don and his friends, would he have been as easily able to reject “being normal” as he does in his school speech?

18. Do you agree that autism is “your choice, your identity” (69) as activist Liz puts it? This seems to be the conclu- sion Hudson, Blanche, and Don all come to. Is this what the novel concludes too? What do you think about Margot’s concerns for her previously non-verbal daugh- ter?

19. Why might people embrace or reject autism as an identity? If you are autistic, what was your choice and why? Or didn’t you have a choice?

20. Why do you think the Rosie books have been so popular?