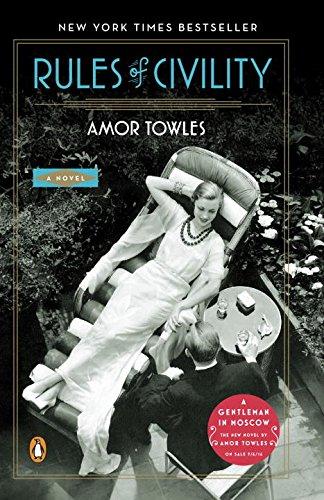 Set in New York City in 1938, Rules of Civility tells the story of a watershed year in the life of an uncompromising twenty-five-year-old named Katey Kontent. Armed with little more than a formidable intellect, a bracing wit, and her own brand of cool nerve, Katey embarks on a journey from a Wall Street secretarial pool through the upper echelons of New York society in search of a brighter future.

The story opens on New Year’s Eve in a Greenwich Village jazz bar, where Katey and her boardinghouse roommate Eve happen to meet Tinker Grey, a handsome banker with royal blue eyes and a ready smile.

Set in New York City in 1938, Rules of Civility tells the story of a watershed year in the life of an uncompromising twenty-five-year-old named Katey Kontent. Armed with little more than a formidable intellect, a bracing wit, and her own brand of cool nerve, Katey embarks on a journey from a Wall Street secretarial pool through the upper echelons of New York society in search of a brighter future.

The story opens on New Year’s Eve in a Greenwich Village jazz bar, where Katey and her boardinghouse roommate Eve happen to meet Tinker Grey, a handsome banker with royal blue eyes and a ready smile. This chance encounter and its startling consequences cast Katey off her current course, but end up providing her unexpected access to the rarified offices of Conde Nast and a glittering new social circle. Befriended in turn by a shy, principled multimillionaire, an Upper East Side ne’er-do-well, and a single-minded widow who is ahead of her times, Katey has the chance to experience first hand the poise secured by wealth and station, but also the aspirations, envy, disloyalty, and desires that reside just below the surface. Even as she waits for circumstances to bring Tinker back into her orbit, she will learn how individual choices become the means by which life crystallizes loss.

Born in 1964, Amor Towles was raised in a suburb of Boston, Massachusetts. He graduated from Yale College and received an M.A. in English from Stanford University where he was a Scowcroft Fellow. He is a principal at an investment firm in Manhattan, where he lives with his wife and two children. He is on the boards of the Library of America and the Yale Art Gallery.

Mr. Towles’s only other published work is a short story cycle called The Temptations of Pleasure published in 1989 in Paris Review 112.

“Brilliantly realized…A sharply stylish debut…the period details…are precise and evocative…but they never detract from the characters. Their issues are the eternal ones of identity and self-worth, set in stark relief in a troubled world.”—The Boston Globe

“The new novel we couldn’t put down…in the crisp, noirish prose of the era, Towles portrays complex relationships in a city that is at once melting pot and elitist enclave – and a thoroughly modern heroine who fearlessly claims her place in it.”—O, the Oprah Magazine

“This very good first novel about striving and surviving in Depression-era Manhattan deserves attention…The great strength of Rules of Civility is in the sharp, sure-handed…evocation of Manhattan in the late ‘30s… Advance reviews of Mr. Towles’s novel have rarely failed to bring up F. Scott’s name. Who needs such burdensome comparisons? On the evidence of Rules of Civility, being Amor Towles should be plenty good enough.”—Wall Street Journal

At the outset, Rules of Civility appears to be about the interrelationship between Katey, Tinker, and Eve; but then events quickly lead Eve and Tinker off stage. Are Dicky Vanderwhile, Wallace Wolcott, Bitsy, Peaches, Hank and Anne Grandyn as essential to Katey’s “story” as Tinker and Eve? If so, what role do you think each plays in fashioning the Katey of the future?

Katey observes at one point that Agatha Christie “doles out her little surprises at the carefully calibrated pace of a nanny dispensing sweets to the children in her care.” Something similar could be said of how Katey doles out information about herself. What sort of things is Katey slow to reveal; and what drives her reticence?

After seeing Tinker at Chinoisserie, Katey indicts George Washington’s Rules of Civility as “A do-it-yourself charm school. A sort of How to Win Friends and Influence People 150 years ahead of its time.” But Dicky sees some nobility in Tinker’s aspiration to Washington’s rules. Where does your judgment fall on Tinker? Is Katey wholly innocent of Tinker’s crime? Where does simulation end and character begin? Which of Washington’s rules do you aspire to?

A central theme in the book is that a chance encounter or cursory decision in one’s twenties can shape one’s course for decades to come. Do you think this is true to life? Were there casual encounters or decisions that you made, which in retrospect were watershed events?

When I told my seven-year-old son that I had written a book that was going to be published, he said: That’s great! But who is going to do the pictures…? While the Walker Evans portraits in the book may not meet my son’s standards of illustration, they are somewhat central to the narrative. But, in addition, there are the family photographs that line Wallace Wolcott’s wall (including the school picture in which Tinker appears twice); there are the photographs of celebrities that Mason Tate reviews with Katey at Condé Nast; there are the pictures that end up on Katey and Valentine’s wall. Why is the medium of photography a fitting motif for the book? How do the various photographs serve its themes?

One of the pleasures of writing fiction is discovering upon completion of a project that some thread of imagery has run through the work without your being aware – forming, in essence, an unintentional motif. While I was very conscious of Photography as a motif in the book, and the imagery of Fairy Tales, here are two motifs that I only recognized after the fact: Navigation (expressed through references to the Odyssey; to the shipwrecks of the Titanic, Endurance and Robinson Crusoe; and through Thoreau’s reckoning and pole star metaphors); and The Blessed and the Damned (expressed through scattered references to churches, Paradise, the Inferno, Doomsday, Redemption Day, the Pieta and the language of the Gospels.) What role do these motifs play in the thematic composition of the book? And if you see me in an airport, can you please explain them to me.

Upon completion of this book, one of my guilty pleasures has been imagining how Eve was doing in Hollywood. When Eve says, “I like it just fine on this side of the windshield” what does she mean? And why is the life Tinker offers her so contrary to the new life she intends to pursue? If you register at my web site, on the first of the year I will send you a short story on Eve’s progress.

When Tinker sets out on his new life, why does he intend to start his days saying Katey’s name? What does he mean when he describes Katey as someone of “such poise and purpose”? Is the book improved by the four sections from Tinker’s point of view, or hindered by them?

T.S. Eliot’s The Love Song of J. Alfred Prufrock” is referenced in the book’s Preface and its Epilogue. Why is that poem somehow central to Katey’s 1969 reflections on her 1938 experiences?

Please don’t answer this last question until the wine glasses are empty and the waiters are waiting impatiently to clear your table: In the Epilogue, Katey observes that “Right choices are the means by which life crystallizes loss.” What is a right choice that you have made and what did you leave behind as a result?