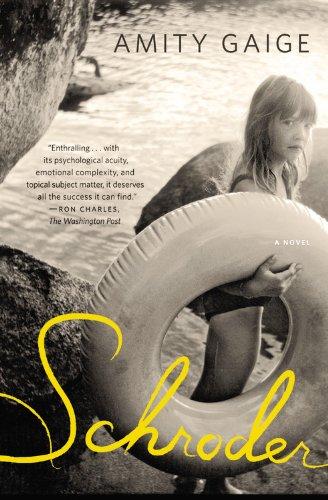 A lyrical and deeply affecting novel recounting the seven days a father spends on the road with his daughter after kidnapping her during a parental visit.

Schroder relates the story of Eric’s urgent escape years later to Lake Champlain, Vermont, with his six-year-old daughter, Meadow, in an attempt to outrun the authorities amid a heated custody battle with his wife,

A lyrical and deeply affecting novel recounting the seven days a father spends on the road with his daughter after kidnapping her during a parental visit.

Schroder relates the story of Eric’s urgent escape years later to Lake Champlain, Vermont, with his six-year-old daughter, Meadow, in an attempt to outrun the authorities amid a heated custody battle with his wife, who will soon discover that her husband is not who he says he is. From a correctional facility, Eric surveys the course of his life to understand-and maybe even explain-his behavior: the painful separation from his mother in childhood; a harrowing escape to America with his taciturn father; a romance that withered under a shadow of lies; and his proudest moments and greatest regrets as a flawed but loving father.

Alternately lovesick and ecstatic, Amity Gaige’s deftly imagined novel offers a profound meditation on history and fatherhood, and the many identities we take on in our lives–those we are born with and those we construct for ourselves.

Amity Gaige‘s essays, articles, and stories have appeared in various publications, including the Yale Review, Los Angeles Times, O Magazine, The Literary Review, and in a 2009 collection of essays, Feed Me (Random House). She is the recipient of a Fulbright Fellowship, a McDowell Colony Fellowship, and a Baltic Writing Residency Fellowship, and is currently the Visiting Writer at Amherst College. She lives in Amherst, Massachusetts, with her family.

“Agile. . . transporting . . . a book that works as both character study and morality play, filled with questions that have no easy answers.”—Janet Maslin, New York Times

“Like Nabokov’s Humbert Humbert, Schroder is charming and deceptive, likable and flawed, a conman who has a clever way with words. Schroder’s tale is deeply engaging, and Gaige’s writing is surprising and original, but the real pull of this magnetic novel is the moral ambiguity the reader feels.”—People

“Enthralling…. Gaige displays an unnerving insight into the grandiosity and fragility of the middle-aged male ego…. Schroder is clearly her breakout book. With its psychological acuity, emotional complexity and topical subject matter, it deserves all the success it can find. I wish there were such a thing as a Divorced Couples Book Club just so we could listen in on the tangled responses.”—The Washington Post

“On occasion… a novel will provoke a host of tangled and disconcertingly conflicted reactions-revulsion and affection; blame and understanding; a connection that goes beyond surface sympathy to a deeper, and possibly unwanted, emotional recognition. These were among the things I experienced while reading Amity Gaige’s astoundingly good novel Schroder.”—The Wall Street Journal

Have you ever told a lie that grew beyond your control? What did you decide to do when the lie became more than you could handle?

Schroder is written as a confessional letter from Eric to his wife, Laura. Have you ever written a confession? About what and to whom?

In the novel, Eric tells his first lie when he is five years old. Do you remember your first lie or a time when you witnessed a young child lie? Why do you think you—or the child you witnessed—told this lie?

If you could change something about your family history, what would it be?

Which famous family might you pretend to be part of? Why?

Eric and Laura’s marriage began with a lie about Eric’s identity. How much of ourselves do we keep from our loved ones? Can omissions ultimately doom a relationship? Or is there room for secrets between spouses and in families?

Meadow is often the only voice of reason in the novel. What about a child’s mind allows Meadow to trust her father, but to be honest with him at the same time?

Were you ever worried for Meadow’s safety? If not, why not?

How does Eric’s immigrant status shape the way he sees the world—and the specific parts of his world, such as Laura, Meadow, and Albany?

Do you think Eric is mentally ill or just a confused man who doesn’t want to lose his daughter? How far would you go to hold on to someone you love?

Can someone who has made mistakes or done bad things in one part of their life still be a good parent?

Are you able to forgive the flaws in your own parents? Do you think Meadow will be able to?