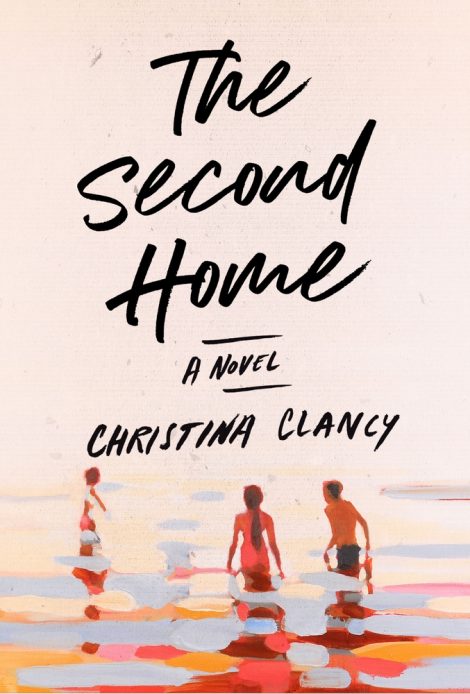 Tender and compassionate, incisive and heartbreaking, Christina Clancy’s The Second Home is the story of a family you’ll quickly fall in love with, and won’t soon forget.

After a disastrous summer spent at her family summer home on Cape Cod, seventeen-year-old Ann Gordon was left with a secret that changed her life forever, and created a rift between her sister, Poppy, and their adopted brother, Michael.

Now, fifteen years later, her parents have died, leaving Ann and Poppy to decide the fate of the Wellfleet home that’s been in the Gordon family for generations.

Tender and compassionate, incisive and heartbreaking, Christina Clancy’s The Second Home is the story of a family you’ll quickly fall in love with, and won’t soon forget.

After a disastrous summer spent at her family summer home on Cape Cod, seventeen-year-old Ann Gordon was left with a secret that changed her life forever, and created a rift between her sister, Poppy, and their adopted brother, Michael.

Now, fifteen years later, her parents have died, leaving Ann and Poppy to decide the fate of the Wellfleet home that’s been in the Gordon family for generations. For Ann, the once-beloved house is tainted with bad memories. Poppy loves the old saltbox, but after years spent chasing waves around the world, she isn’t sure she knows how to stay in one place.

Just when the sisters decide to sell, Michael re-enters their lives with a legitimate claim to the house. But more than that, he wants to set the record straight about that long ago summer. Reunited after years apart, these very different siblings must decide if they can continue to be a family—and the house just might be the glue that holds them together.

Told through the shifting perspectives of Ann, Poppy, and Michael, this assured and affecting debut captures the ache of nostalgia for summers past and the powerful draw of the places we return to again and again. It is about second homes, second families, and second chances.

Christina Clancy‘s work has appeared in the New York Times, The Washington Post, The Chicago Tribune, The Sun Magazine and in various literary journals, including Glimmer Train, Pleiades and Hobart. She holds a PhD in Creative Writing from the University of Wisconsin-Milwaukee. The Second Home is her first novel.

“Christina Clancy writes with warmth, wit, and wisdom about fantastically human characters. A novel of family and place and belonging for fans of Ann Packer and J. Courtney Sullivan.” —Rebecca Makkai, Pulitzer Prize finalist for The Great Believers

“I gobbled The Second Home in a matter of days, fully invested in the history, hurt, and hopes of this very human family. Christina Clancy writes with empathy and rich detail: to read about the Gordons is to smell the pine and oak of Wellfleet, to tread the well-worn rooms of their eccentric summer home, and to learn all sides of the explosive rift that sent them hurtling in different directions. Tender and suspenseful, Clancy’s debut explores the nature of home as well as the nature of family itself—given and chosen.” —Chloe Benjamin, New York Times bestselling author of The Immortalists

“A sure-footed ode to the strength of family, the depth of loss, and the power of forgiveness.” —J. Ryan Stradal, New York Times best-selling author, Kitchens of the Great Midwest

“The Second Home shows us how families are knit together and how they unravel; how a place—a geography, a house—can act as the repository for our best and most important memories. And that even the most damaged past can be reclaimed, a hard-won wisdom that shines through on every page.” —Jean Thompson, New York Times bestselling author of The Year We Left Home

“Clancy imagines her complicated characters with such empathy and precision that every questionable choice, every mistake, feels like the only option. The Second Home is a big, sprawling, smart, beautiful story about love and betrayal, home and family, and the foundations of forgiveness.” —Lauren Fox, author of Days of Awe, Friends Like Us, and Still Life With Husband

“Christina Clancy writes with an arresting vividness and a nuanced understanding of her characters, who are buffeted by a storm of conflicting desires. A poignant but also very entertaining novel—full of startling detail, humor, and above all, an abiding sympathy for its beautifully drawn characters.” —Christine Sneed, author of Little Known Facts

1. “Cape Cod felt like a hazy dream the rest of the year, a place suspended forever in beach days filled with sunshine and warmth.” Do you have a place from your younger years that inhabits your memory in this way? How does the youthful memory compare to the reality?

2. “She felt her parents’ radiant energy in everything she saw as she paced the house to stay warm: the chipped wine glass left in the sink, the sloppily folded beach towels and stained pillowcases, in her mother’s cookbooks, her father’s telescope, even in the bulb digger where they’d always hidden the skeleton key that unlocked the back door.” Imagine walking into a house—what would “tell” of your own parents, what would signal that they were the most recent inhabitants? When you are gone, what objects might reflect your presence?

3. “It smelled like rotten eggs at low tide, but that was a smell she loved in the same primal way that she’d loved the smell of Noah’s sweet bald head when he was a baby…every molecule in her body seemed to change.” What senses are activated by a special place or person? What powers can smell have?

4. How do each of the Gordon children explore and deal with the loss of their parents? Did you consider any of their reactions healthy or unique?

5. Young Michael’s background is very different from that of Ann and Poppy. What intense experiences has he already had before joining the Gordon family? What misconceptions did outsiders hold about what Michael might bring into their lives?

6. “She loved Michael, so why did she feel so selfish? She wanted to tell Michael that the house was theirs, and summer was her time with her father.” Can you track Poppy’s emotions in this adolescent outburst? What is she wrestling with here? How do Ann’s complicated feelings toward Michael manifest over the course of the novel?

7. What role does family—the ones we’re born into and the ones we create—serve? What are some assumptions we might make about families like the Shaws?

8. “He signed quickly, before he could change his mind. And just like that, he became a nobody.” What does this mean, for Michael to become a “nobody”? Did you feel empathy for Michael’s choice? Which adults could have handled the situation differently?

9. “Just look at us. One of your kids is missing, the other is a burn out, and I’m a teenage mom. Great job, you guys!” What did you make of the Gordon family? Are their secrets and struggles commonplace?

10. The Shaw family is, on its surface, quite different from the Gordons. Do they share any similarities? Did you feel sympathy for Maureen? What about for the Shaw boys?

11. Discuss the role and impact of secrets in this novel. Are they inherently destructive, or are some secrets worth keeping? Why do Ann and Michael hold on to their secrets, and why is Connie’s illness not openly shared with Poppy?

12. How is Anthony able to manipulate both Ann and Michael? What kind of power does he hold over each of them?

13. “She felt like a part of her drowned in that pond.” As a reader, what was it like to read Ann’s rape scene and the unraveling that followed? Why does Ann blame herself for what happened that night, and everything that came after?

14. “Poppy was the victim of collateral damage.” Discuss Poppy’s trajectory from unsupervised teen with risky behaviors to globe-traveling yoga teacher and commitment- phobe, to mother. What makes Poppy resist responsibility and returning home? What changes for her?

15. In what ways do children and grandchildren change the dynamics of a family?

16. How does Ann’s confrontation of Anthony affect her? Discuss the emotion and drama of this scene, and the impact on you as a reader. Did this meeting play out as you expected?

17. Explore what Wellfleet means to each of the main characters in the novel—what did it represent for Connie and Ed, for Michael and, ultimately, for the sisters? Why are they drawn to it? What are they nostalgic for?

18. “We should have figured this out. Should have assumed the best about each other, not the worst.” Why is Ann so late to forgive or welcome Michael back into her life? In what specific ways did they each feel betrayed?

19. “Is that what houses really were, containers for families? And once the containers were gone, the people inside were just set loose in the world, particles.” A theme throughout the novel is that houses hold our histories. How does this play out on the page, and has it proven true in your life?

20. “It was still theirs, still in the family, still vulnerable to the elements, still requiring upkeep. It was an anchor, yes, but one that held her in place.” How is a house an “anchor” and what does that mean for these characters moving forward?