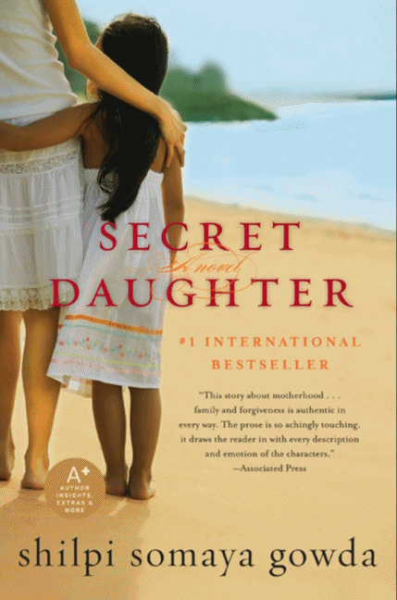 Somer’s life is everything she imagined it would be—she’s newly married and has started her career as a physician in San Francisco—until she makes the devastating discovery she never will be able to have children.

The same year in India, a poor mother makes the heartbreaking choice to save her newborn daughter’s life by giving her away. It is a decision that will haunt Kavita for the rest of her life, and cause a ripple effect that travels across the world and back again.

Asha, adopted out of a Mumbai orphanage, is the child that binds the destinies of these two women.

Somer’s life is everything she imagined it would be—she’s newly married and has started her career as a physician in San Francisco—until she makes the devastating discovery she never will be able to have children.

The same year in India, a poor mother makes the heartbreaking choice to save her newborn daughter’s life by giving her away. It is a decision that will haunt Kavita for the rest of her life, and cause a ripple effect that travels across the world and back again.

Asha, adopted out of a Mumbai orphanage, is the child that binds the destinies of these two women. We follow both families, invisibly connected until Asha’s journey of self-discovery leads her back to India.

Compulsively readable and deeply touching, Secret Daughter is a story of the unforeseen ways in which our choices and families affect our lives, and the indelible power of love in all its many forms.

Shilpi Somaya Gowda was born and raised in Toronto to parents who migrated there from Mumbai. She holds an MBA from Stanford University, and a Bachelor’s Degree from the University of North Carolina at Chapel Hill. In 1991, she spent a summer as a volunteer in an Indian orphanage. A native of Canada, she has lived in New York, North Carolina, and Texas. She now lives in California with her husband and children. Find Shilpa on Facebook.

“First novelist Gowda offers especially vivid descriptions of the contrasts and contradictions of modern India… Rife with themes that lend themselves to discussion, such as cultural identity, adoption, and women’s roles, this will appeal to the book club crowd.”—Library Journal

“Gowda’s flair for detail is evident in the way she describes the clothes, food, the streets and their smells of this land teeming with people and poverty. This story about motherhood, loss, family and forgiveness is authentic in every way. … The prose is so achingly touching, it draws the reader in with every description and emotion of the characters.”
—Lisa Orkin Emmanuel, Associated Press

“Fiction with a conscience, as two couples worlds apart are linked by an adopted child….A lightweight fable of family division and reconciliation, gaining intensity and depth from the author’s sharp social observations“—Kirkus

On the way to the orphanage in Bombay, Kavita reflects on “what power there is in naming another living being.” She gives her daughter the name Usha at birth, but she is later raised by her adoptive parents as Asha. Kavita’s name changed when she was married, and her given name reappears again later in the story. Even Krishnan becomes known as “Kris” in America. What is the significance of these changing names throughout the story? How are names intertwined with your own sense of identity and belonging?

Kavita faces a difficult choice at the beginning of the novel. Did she make the right decision? What would you have done if you were in Kavita’s place? What would the repercussions be of making a different choice?

Why do you think Somer made the decision to adopt a child from India, and do you believe her reasons were sound? Are there any parallels between how she made this decision, and her previous decision to marry Krishnan?

Both families in the novel leave their home in search of better life—the Merchants leave their village for Bombay, and Krishnan leaves India for America—and this act of migration creates longing for home and feelings of displacement. Do you think their migrations were driven more by wanting to leave home or being attracted to a new place? Would the characters have made different choices if they knew what the consequences would be?

The novel explores the issue of how gender affects one’s role in society, both in India and the United States. Despite much of the obvious discrimination women face in India, Sarla Thakkar believes, “you can’t always see the power women hold, but it is there . . . ” In what ways is this true? What are the benefits and drawbacks of being a woman in each of these countries? Are there any similarities in the female experience across the two cultures?

An overarching theme of the novel is motherhood, and how that experience can change a woman. Both Somer and Kavita have powerful experiences and emotions around pregnancy, childbirth and mothering. What are the differences in how they experience motherhood, and are there any similarities? Are there universal aspects to motherhood or is it an individual experience?

Both marriages portrayed in the novel, despite different circumstances and origins, face significant challenges. How did Kavita and Jasu’s marriage recover from the dramatic conflict they faced at the beginning? What caused the estrangement between Krishnan and Somer, and how did each spouse contribute to it? Do you believe one marriage is fundamentally stronger than the other? What do you believe the future holds for each couple?

Asha grows up with a deep curiosity about her biological family in India. Could her parents have done anything to lessen the sense of feeling incomplete Asha had as an adolescent? Can her conflict with Somer be chalked up to that experienced in all mother-teenage daughter relationships, or was it more complicated? What does Asha learn about the true meaning of family, and could she have learned it without going to India?

This story turns on a twist of fate that changes the life path of Asha, and follows the parallel lives of Asha and her brother in India. Do you believe Asha was better off being taken to the orphanage as a baby than she would have been with her birth parents? Could Vijay have had a different life? How much of our lives are destined for us, and how much is within our power to change? Reflecting on your own life, what have been the turning points that have been made for you, and those made by you?

The importance of relationships across generations echoes through the novel, particularly at the end, with the deaths of Krishnan’s father and Kavita’s mother. What role do elder relatives play in the story? What hopes and expectations are passed down? What did you think of the relationship that develops between Sarla (Dadima) and Asha? How are these ideas complicated or resolved in the rituals of the cremation ceremonies at the end?

What do you believe Kavita and Jasu are feeling and thinking at the end of the novel? Were you surprised at the ending? Did you find it satisfying? How did your view of Jasu’s character change from the beginning, and why? What do you imagine happens to these families next?