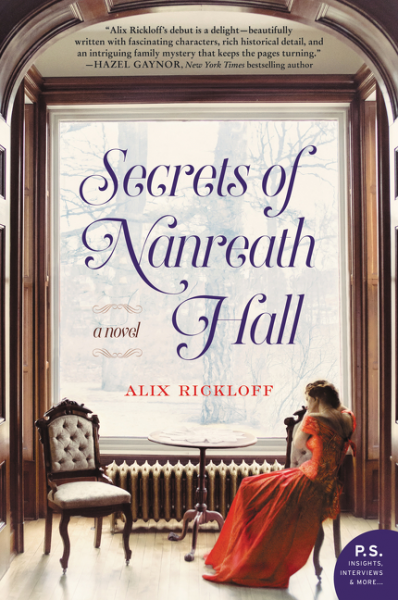 This incredible debut historical novel—in the tradition of Beatriz Williams and Jennifer Robson—tells the fascinating story of a young mother who flees her home on the rocky cliffs of Cornwall and the daughter who finds her way back, seeking answers.

Cornwall, 1940. Back in England after the harrowing evacuation at Dunkirk, WWII Red Cross nurse Anna Trenowyth is shocked to learn her adoptive parents Graham and Prue Handley have been killed in an air raid. She desperately needs their advice as she’s been assigned to the military hospital that has set up camp inside her biological mother’s childhood home—Nanreath Hall.

This incredible debut historical novel—in the tradition of Beatriz Williams and Jennifer Robson—tells the fascinating story of a young mother who flees her home on the rocky cliffs of Cornwall and the daughter who finds her way back, seeking answers.

Cornwall, 1940. Back in England after the harrowing evacuation at Dunkirk, WWII Red Cross nurse Anna Trenowyth is shocked to learn her adoptive parents Graham and Prue Handley have been killed in an air raid. She desperately needs their advice as she’s been assigned to the military hospital that has set up camp inside her biological mother’s childhood home—Nanreath Hall. Anna was just six-years-old when her mother, Lady Katherine Trenowyth, died. All she has left are vague memories that tease her with clues she can’t unravel. Anna’s assignment to Nanreath Hall could be the chance for her to finally become acquainted with the family she’s never known—and to unbury the truth and secrets surrounding her past.

Cornwall, 1913. In the luxury of pre-WWI England, Lady Katherine Trenowyth is expected to do nothing more than make a smart marriage and have a respectable life. When Simon Halliday, a bohemian painter, enters her world, Katherine begins to question the future that was so carefully laid out for her. Her choices begin to lead her away from the stability of her home and family toward a wild existence of life, art, and love. But as everything begins to fall apart, Katherine finds herself destitute and alone.

As Anna is drawn into her newfound family’s lives and their tangled loyalties, she discovers herself at the center of old heartbreaks and unbearable tragedies, leaving her to decide if the secrets of the past are too dangerous to unearth…and if the family she’s discovered is one she can keep.

Alix Rickloff is a critically acclaimed author of historical and paranormal romance. Her previous novels include the Bligh Family series, the Heirs of Kilronan trilogy, and, as Alexa Egan, the Imnada Brotherhood series.

“In this compelling and heartwarming novel, Alix Rickloff shares with us two women, mother and daughter, whose tragic and triumphant lives intertwine through two world wars. The story pulls us into the universal struggle of all women to find their places in their worlds. I was deeply moved.” — Karen Harper, New York Times bestselling author of The Royal Nanny

“Filled with secrets that kept me turning pages to get to the mysterious truth. At the heart, this is a novel about searching for one’s identity. The vivid writing combined with such an intriguing story make Alix Rickloff an exciting voice in historical fiction.” — Renee Rosen, bestselling author of White Collar Girl

“Telling an elegant tale about a mother and daughter trying to find themselves in the midst of two very different world wars, Alix Rickloff establishes herself as an up and coming talent in the historical fiction genre.” — Stephanie Dray, author of America's First Daughter

The book opens with Kitty looking

back on her life and her choices. Did

your knowledge of how her story

ultimately ends affect how you felt as

Anna’s story begins in late 1940 when

and an attempted invasion seemed

inevitable. Despite this threat, citizens

never panicked. How would you have

felt under a similar situation? Would

you have assisted in the defense of your

country? In what way?

From the VADs to the WVS, the Land

Girls to the WAAF, there are references

throughout the book to the full-scale

female population. After the war’s

end, most of these women returned to

their homes and families. Do you think

it was difficult for them to go back to

the way things were after such valuable

contributions? Do you think the war

was a factor in the rise of feminism that

The Hungarian-born artist Balázs was

interned during World War I along with

thousands of other enemy nationals,

including many British citizens of

thousands of Italian, German, and, in

were interned. Do you believe these

governments were justified in their

actions? Do you see it ever happening

Lady Boxley tells Anna, “A father is the man who makes you the

you think she was referring to Anna’s situation or Hugh’s? Or both?

Anna thinks she should tell Hugh the truth about his paternity.

Tony and Lady Boxley disagree. What would you do if faced with

Secrets are at the heart of both stories, from Anna’s white lie when

she first meets Hugh to the heartbreaking betrayals that end up

tainting the lives of two generations. Have you ever kept a secret?

Have you ever had someone keep a secret from you?

William followed the rules while Kitty followed her heart. Neither

ended with what they wanted. Who made the better choice? Why?

love for Kitty or do his actions make him a villain?

Anna wears a locket with her parents’ pictures in it. Do you have a

favorite memento you carry all the time? What is it? What does it

Sister Murphy is rarely seen and speaks only a few times, yet she is

one of the most vivid characters in the book. How is her personality

conveyed when she is so rarely part of the main action? Would you

have liked to have seen more or less of her?

Both Anna and Hugh are affected by their wartime battle

experiences. How does each of them cope with the trauma? In what

Do you know anyone who served during World War II, either in the

military or as a civilian volunteer? How did the war affect them?

Hugh or self-interest? What about the Lady Boxley of Anna’s story?

What are some examples in both cases that further your argument?

Which character did you most identify with? Which time period

drew you in more deeply? What will you most remember about this