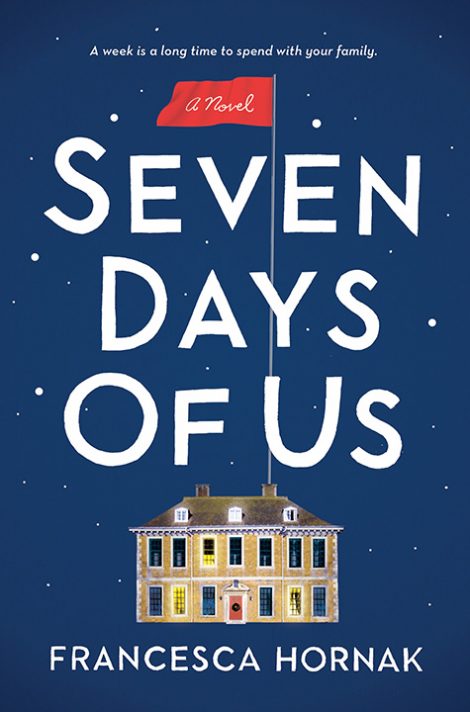 SEVEN DAYS OF US

It’s Christmas, and for the first time in years the entire Birch family will be under one roof. Even Emma and Andrew’s elder daughter—who is usually off saving the world—will be joining them at Weyfield Hall, their aging country estate. But Olivia, a doctor, is only coming home because she has to. Having just returned from treating an epidemic abroad, she’s been told she must stay in quarantine for a week…and so too should her family.
For the next seven days, the Birches are locked down, cut off from the rest of humanity—and even decent Wi-Fi—and forced into each other’s orbits.

It’s Christmas, and for the first time in years the entire Birch family will be under one roof. Even Emma and Andrew’s elder daughter—who is usually off saving the world—will be joining them at Weyfield Hall, their aging country estate. But Olivia, a doctor, is only coming home because she has to. Having just returned from treating an epidemic abroad, she’s been told she must stay in quarantine for a week…and so too should her family.
For the next seven days, the Birches are locked down, cut off from the rest of humanity—and even decent Wi-Fi—and forced into each other’s orbits. Younger, unabashedly frivolous daughter Phoebe is fixated on her upcoming wedding, while Olivia deals with the culture shock of being immersed in first-world problems.

As Andrew sequesters himself in his study writing scathing restaurant reviews and remembering his glory days as a war correspondent, Emma hides a secret that will turn the whole family upside down.

In close proximity, not much can stay hidden for long, and as revelations and long-held tensions come to light, nothing is more shocking than the unexpected guest who’s about to arrive… 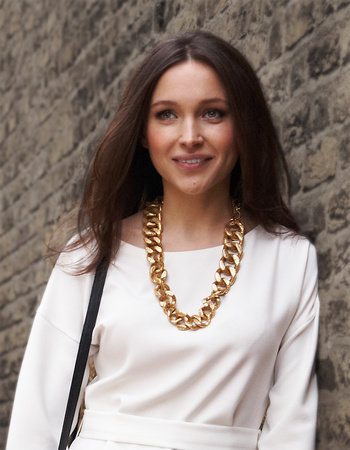 Francesca Hornak is a journalist and writer whose work has appeared in newspapers and magazines, including The Sunday Times, The Guardian, Elle, Marie Claire, Cosmopolitan, and Red. She is the author of two nonfiction books, History of the World in 100 Modern Objects: Middle-Class Stuff (and Nonsense) and Worry with Mother: 101 Neuroses for the Modern Mama.

“You will laugh at hilarious situations and be touched by others, ultimately discovering that the Birch family is basically every family.”—Associated Press

“Witty and deeply heartfelt, Seven Days of Us is an insightful, character-driven look at the real failures, fumbles, and false starts that define family–and why understanding the people closest to us might be the hardest thing in the world.”—Emily Giffin, #1 New York Times bestselling author

1. Is there one character you relate to more than any other in this story? If so, why?

2. How well do you think Francesca Hornak captures the family dynamic of a week in quarantine over the holidays?

3. Do you think it was better/right for Andrew to conceal his one-off infidelity with Jesse’s mother? Or should he have spoken up and told Emma at the time?

4. Why did Olivia stay away from her family for so long? Have you ever experienced the feeling of not being able to be yourself with your family?

5. Discuss the sibling rivalry between Olivia and Phoebe. Why do you think we, as adults, fall into old roles when home with family? Have you experienced this?

6. What do you think kept Phoebe and George together for six years?

8. Is there a moral lesson that each character takes away with them at the end of the story? If so, what is that lesson?

9. What are the main themes in the story?

10. Do you like the way the story is told from multiple points of view?

11. The end is tinged with tragedy and hope. How did the ending affect you?

12. What do you imagine or hope would happen next for each of the members of the Birch family after the closing pages of the book?

What compelled you to write Seven Days of Us?

In 2014 my oldest friend went to treat Ebola in Sierra Leone, and afterwards, she and her family had to spend December in quarantine. When she told me, I couldn’t stop thinking about the idea of a quarantine intensifying the familiar Christmas set-up and how that pressure cooker could make a neat start to a novel. On a more prosaic level, I found out I was pregnant soon after I began writing—so after that it was a race to birth the novel before the baby. I was editing when I went into labor.

Which of the Birches—Olivia, Phoebe, Emma or Andrew—do you relate to the most? Warning: spoiler alert!

On paper I’m sorry to say that I’m most like the bratty, blinkered Phoebe but I felt for them all in different ways. I relate to Emma as a mother and an inveterate worrier, and her impulse to uphold family traditions. And Andrew’s rage at his words being edited is annoyingly familiar to me as a journalist. I found earnest Olivia’s head hardest to get into, though I think we can all identify with resenting your family and wanting to be the adult you are at work, at home. Plus, we were both pregnant so we had that in common.

Were any of the characters based on someone you’ve met before?

Not consciously! But my older brother is definitely more intrepid and aloof than me so the dynamic between the siblings has some basis in my own experience. And at university in Oxford, I met lots of men like George Marsham-Smith . . . I only had myself to blame, as I chose an athletic college thinking there would be less academic work, which wasn’t even true.

If you were forced into quarantine with your family, what would you find most challenging? Most rewarding?

We practically were in quarantine last Christmas because I roped my poor family into intensively potty training my son. We barely left my parents’ holiday home for a week. I’m ashamed to say that I struggled with my father’s insistence on hoarding moldy condiments (whenever I try to bin mustard with a 2010 date stamp I get accused of being ‘the fridge police’), and my mother’s tendency to launch into very in-depth conversations at breakfast. I should be mature enough to find these things endearing, but family makes you regress! The most rewarding thing about being at home is always watching my parents and my children together. Seeing your mum and dad as besotted grandparents is very special—it softens everyone and breathes new life into the house.

Share your funniest (or most cringe-worthy) family holiday story or tradition.

When my brother and I were little, we used to get so hyperactive that we were allowed to open one present under the tree on Christmas Eve. It became tradition to deliberately pick a present that was likely to be a bit rubbish so you got it out of the way and weren’t disappointed on Christmas Day.We had certain relations who could be relied on to send a terrible gift—some of our top Christmas Eve openings were a 1,000-piece jigsaw of baked beans, a negligee (when I was seven . . . ) and a huge empty box.

I wasn’t aware of our traditions being cringey until my husband started spending Christmas with us and was slightly aghast that we still all make stockings for each other when my brother and I are well into our thirties. We also persist with real candles on the tree, even though it once caught fire and my grandmother had to throw the whole thing out of the front door.

The uncommunicative Birches are in stark contrast to the novel’s sunny Californian, Jesse. What is your take on the cultural differences between the U.S. and the UK—is that intentional?

From the start I felt Andrew’s son should be foreign but English speaking, so I chose to have him from the U.S. It was only when I started to write in Jesse’s voice that I realized his Californian positivity and emotional fluency was a good foil to Andrew’s cynicism and the Birch family’s stiff upper lip. So it wasn’t deliberate, but I was probably unconsciously drawn to portraying those cultural differences as I’m a natural sceptic myself (much as I’d love not to be), and I really envy the enthusiasm and straightforwardness that seems to be the norm in the states. The British embarrassment threshold can be painfully low! That said I think there’s a new generation of Brits who are already more like Jesse than the Birch family because of all the motivational mottos floating around Instagram . . .

What do you hope readers take away from Seven Days of Us?

That family dynamics aren’t set in stone and that it’s never too late for relationships to turn around. I loosely based the plot on the parable of The Prodigal Son, as I’ve always been drawn to the idea of second chances.