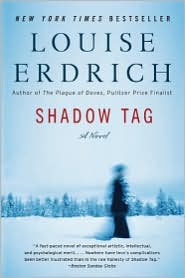 When Irene America discovers that her husband, Gil, has been reading her diary, she begins a secret Blue Notebook, stashed securely in a safe deposit box. There she records the truth about her life and her marriage, while turning her Red Diary hidden where Gil will find it into a manipulative farce. Alternating between these two records, complemented by unflinching third-person narration, Shadow Tag is an eerily gripping read.

When the novel opens, Irene is resuming work on her doctoral thesis about George Catlin, the nineteenth-century painter whose Native American subjects often regarded his portraits with suspicious wonder.

When Irene America discovers that her husband, Gil, has been reading her diary, she begins a secret Blue Notebook, stashed securely in a safe deposit box. There she records the truth about her life and her marriage, while turning her Red Diary hidden where Gil will find it into a manipulative farce. Alternating between these two records, complemented by unflinching third-person narration, Shadow Tag is an eerily gripping read.

When the novel opens, Irene is resuming work on her doctoral thesis about George Catlin, the nineteenth-century painter whose Native American subjects often regarded his portraits with suspicious wonder. Gil, who gained notoriety as an artist through his emotionally revealing portraits of his wife work that adores, sensual, and humiliating, even shocking realizes that his fear of losing Irene may force him to create the defining work of his career.

Meanwhile, Irene and Gil fight to keep up appearances for their three children: fourteen-year-old genius Florian, who escapes his family s unraveling with joints and a stolen bottle of wine; Riel, their only daughter, an eleven-year-old feverishly planning to preserve her family, no matter what disaster strikes; and sweet kindergartener Stoney, who was born, his parents come to realize, at the beginning of the end.

As her home increasingly becomes a place of violence and secrets, and she drifts into alcoholism, Irene moves to end her marriage. But her attachment to Gil is filled with shadowy need and delicious ironies. In brilliantly controlled prose, Shadow Tag fearlessly explores the complex nature of love, the fluid boundaries of identity, and one family s struggle for survival and redemption.

Louise Erdrich is the author of thirteen novels as well as volumes of poetry, short stories, children’s books, and a memoir of early motherhood. Her novel Love Medicine won the National Book Critics Circle Award. The Last Report on the Miracles at Little No Horse was a finalist for the National Book Award. Most recently, The Plague of Doves won the Anisfield-Wolf Book Award and was a finalist for the Pulitzer Prize. Louise Erdrich lives in Minnesota and is the owner of Birchbark Books, an independent bookstore.

“A fast-paced novel of exceptional artistic, intellectual, and psychological merit…While the writing is fiercely disciplined, with a poet’s polish, every line is unpredictable…Nowhere have love’s complications been better illustrated than in the raw honesty of Shadow Tag.”—Boston Sunday Globe

“A masterpiece…a captivating work of fiction…exquisite…tightly focused…arresting…a taut tale…Shadow Tag is a devastating portrayal of the circular insanity of romantic obsession…This profoundly tragic novel captures that lament in some of Erdrich’s most beautiful and urgent writing.”—Ron Charles,
Washington Post

“A portrait of an ‘iconic’ marriage on its way to dissolution…Erdrich’s unbridled urgency yields startlingly original phrasing as well as flashes of blinding lucidity.”—New York Times
Book Review

“Gripping…a hushed and haunting tale that chillingly and convincingly reflects the upper-middle-class American experience, not only the Native American one.”—USA Today

What is your opinion of Irene and Gil? Did you like one more than the other? Do they bear equal responsibility for the state of their relationship, or do you see them more as victim and perpetrator? If so, which is which?

Would you call their relationship unique, or are the passions and demons that drive them inherent in marriage itself?

Were Gil and Irene good parents? What role did their children play in their lives? How does Irene and Gil’s dysfunctional marriage affect their children? Would their marriage have been different if they had remained childless?

Why did Irene choose to keep a secret diary? Why not just confront Gil—or walk away?

One of the central themes of the story is the friction between independence and control. Which character, ultimately, was the more controlling in the relationship? Did Irene truly wish to be free? What did independence mean to her?

Irene liked to lock herself in the bathroom for escape. “It was her nakedness. That she could be alone with her nakedness. And there was no demand on her nakedness, not from her husband, whose reaction to her nakedness was much too complex, nor from her babies . . . or even from the mirror, which demanded that she assess her nakedness as a woman does, through the eyes of others.” What did nakedness symbolize for her?

Does a woman lose her identity—her sense of oneness with herself—once she marries and has children? How can this sense of self be regained if it’s lost? Can we keep ourselves whole, or does the nature of relationships—the opening of the self—demand that we give away pieces of ourselves? Is this issue unique to women or do you believe that men confront it too? Did Gil?

Irene asks Gil, “Do you ever think about privacy, I mean, as a notion, how much people are entitled to it? How much people give up when they’re together, say, how much privacy is important or right?” How would you answer these questions?

Like many other artists, Gil painted Irene as “a way of trying to get at the essential mystery, the unknown essence, otherness, and it was also an act of fascinated love.” Irene believed she was transparent to him. Do you agree? And can art reveal that “essential mystery”? How?

What is the significance of art in the novel? How does the work of George Catlin, the subject of Irene’s thesis, parallel that of Gil? Were both artists stealing souls? Is the creative process parasitic in nature?

What does the title Shadow Tag mean? How much of Irene and Gil’s selves were overshadowed by the other? Do you believe Gil ultimately captured Irene’s shadow? Was that his goal? Did Irene possess Gil’s shadow?

Did alcohol mask their problems or unleash them? What role did it play in Gil’s creativity? Why do you think many artists have had problems with alcohol?

How much do their backgrounds as Native Americans influence their characters? What role does that heritage play in the story? What was the impact of their childhoods on the people they would become?

How did discovering her half-sister Louise, affect Irene? What role did Louise play in the story?

Did the novel’s ending shock you? What were your overall impressions of the story? What did you feel on finishing the novel? What insights did you glean into love, marriage, and family?

If you’ve read other books by Louise Erdrich, how does Shadow Tag fit into her oeuvre?