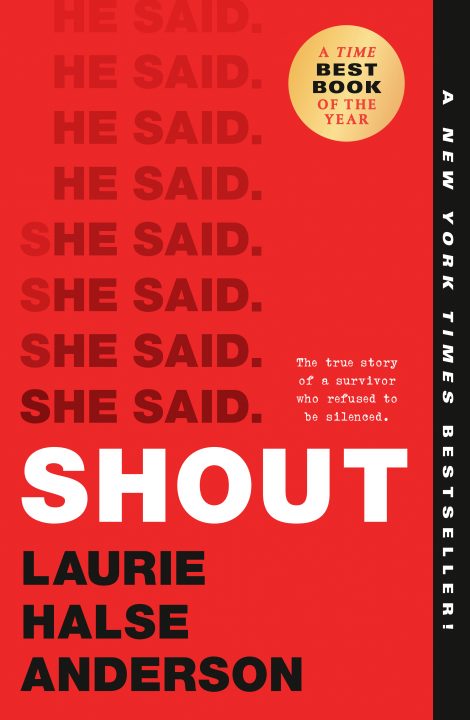 Bestselling author Laurie Halse Anderson is known for the unflinching way she writes about, and advocates for, survivors of sexual assault. Now, inspired by her fans and enraged by how little in our culture has changed since her groundbreaking novel Speak was first published twenty years ago, she has written a critically acclaimed poetry memoir that is as vulnerable as it is rallying, as timely as it is timeless. In free verse,

Bestselling author Laurie Halse Anderson is known for the unflinching way she writes about, and advocates for, survivors of sexual assault. Now, inspired by her fans and enraged by how little in our culture has changed since her groundbreaking novel Speak was first published twenty years ago, she has written a critically acclaimed poetry memoir that is as vulnerable as it is rallying, as timely as it is timeless. In free verse, Anderson shares reflections, rants, and calls to action woven among deeply personal stories from her life that she’s never written about before. Praised as “captivating,” “powerful,” and “essential” by critics, this searing and soul-searching memoir is a denouncement of our society’s failures and a love letter to all the people with the courage to say #MeToo and #TimesUp, whether aloud, online, or only in their own hearts. SHOUT speaks truth to power in a loud, clear voice–and once you hear it, it is impossible to ignore. 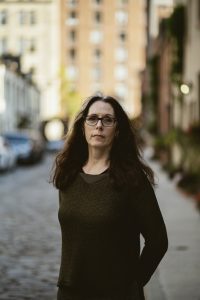 Laurie Halse Anderson has received both the Margaret Edwards Award and the ALAN Award for her contributions to young adult literature. She has also been honored by the National Coalition Against Censorship in recognition of her fight to combat the censoring of literature. She is the author of the groundbreaking National Book Award finalist and Printz Honor Book Speak. She is also author of the critically acclaimed YA books Prom, Twisted, Catalyst, Wintergirls, and The Impossible Knife of Memory. She has also authored a number of middle grade titles including The Vet Volunteers series, and the historical fiction Seeds of America Trilogy, which includes Forge, ALA Best Book for Young Adults Fever 1793, and the National Book Award finalist and Scott O’Dell Award-winner Chains. She and her husband live in northern New York State. Follow Laurie on Twitter @halseanderson and visit her at madwomanintheforest.com.

“With ‘Speak’ Anderson opened the door for more novels exploring the deeply felt and deeply personal aftermath of sexual violence. ‘Shout’ serves as both a testament to the life-altering, lifesaving impact of these types of stories – and as an urgent and brutal reminder of their ongoing necessity.” —The New York Times Book Review

“[Anderson’s] poems raise urgent alarms, warning against the evils propagated by a culture that values dominance over respect. . . . Anderson uses her experiences to light a path for others to find purpose.” —TIME Magazine

“SHOUT weaves stories about formative experiences with meditations on sexual violence, boundaries, and gender dynamics to paint a clear and poignant picture of the insidiousness of rape culture and the lessons it teaches us.” —Bitch

“Anderson’s prose is so gorgeous . . . that at times the book needs to be put down to absorb her utter mastery of language.” —Entertainment Weekly

“Haunting, vulnerable, and striking. . . Both a love letter to survivors and a call-to-action, SHOUT is a necessary read of the #MeToo era.” —Bustle

“Flawless. . . .A masterclass in feminism, in storytelling, and in the power of words to draw action that changes the world.” —BookRiot

“There is grief, rage, and power in every word. . . An incredible book.” —Bookish

“Anderson is a brilliant writer, and her fiery memoir is a voice we need to hear.” —The Buffalo News

“A powerful testament that bears witness not just to [Anderson’s] own pain, and the pain of others similarly abused, but also to the power of speaking persistently, time and time again, about topics that most people don’t want to hear.” —The Los Angeles Review of Books

“[A] searing memoir about long-suppressed secrets, trauma and rage. . . Breathtaking turns of phrase amplify candor around violations and violence, silence and shame, guilt and rage.” —The San Francisco Chronicle

“Her new poetic memoir, written in free verse with her signature honesty and vulnerability, will add new depth and dimension to our conversations around #MeToo and #TimesUp.” —HelloGiggles

“One of the most important YA books this year.” —Paste

“A captivating, powerful read about clawing your way out of trauma . . . Fervent and deafening.” —Booklist, starred review

“An important book for the #MeToo movement. Necessary for every home, school, and public library.” —Kirkus Reviews, starred review

“Ferociously raw . . . . [a] deeply personal look into how [Anderson] channeled her pain into the writing of Speak.” —BookPage, starred review

“Immensely powerful, SHOUT is for everyone.” —Shelf Awareness, starred review

“Will ring out to readers who themselves believe in the power of stories.” —The Bulletin of the Center for Children’s Books, starred review

“Searing. . . More than a gifted writer, Anderson is an advocate for anyone who feels alienated. Her sensitive, incisive book is essential for all young people.” —School Library Journal, starred review

“A praise song to survivors, a blistering rebuke to predators, and a testament to the healing power of shared stories.” —The Horn Book, starred review

1. Why is the book divided into three parts? Why is the poem “Speak, Draft One, Page One” in Part One instead of Part Two?

3. Anderson repeatedly calls attention to the etymology and de­finition of words, and several poems explicitly compare words. Reread “two opposites of rape,” “the word,” and “shame turned inside out.” How do these underscore her argument about the power of language?

4. Anderson ends her introduction with the following sentence: “This is the story of a girl who lost her voice and wrote herself a new one.” Discuss what events or attitudes silenced her voice. Find evidence in the book that she has written herself a new voice.

5. Anderson says, “Danish is a tricky language,” and explains how the pronunciation uses very different sounds than English. Why do you think she includes so many Danish words in her poems, particularly if she knows much of her audience is unlikely to speak the language?

6. Reread “cave painting.” What turning point does this articulate in Anderson’s writing life?

7. In the poem “Catalyst”, the author describes how names in her novels are very carefully and deliberately chosen. Find examples when Anderson uses names in her poems. Then reflect on why so many of her poems never offer a name (or pseudonym) for her subjects.

8. What messages about words and sharing stories did Anderson receive as a child? Use poems such as “unclean” and “tsunami” to compare those childhood messages to her mature understandings about speaking one’s truth.

9. Why do you think Anderson wrote Speak ­ first instead of writing a memoir about her experiences with sexual violence?

10. The majority of SHOUT is written in free verse. What effect does reading this in poem form have on the reader? What is left out and what is emphasized through this form?

11. There are three pieces in Part One that use prose instead of free verse. Reread the numbered paragraphs in “ampli­fied,” “ninth grade: my year of living stupidly,” and “chronological cartography.” Why are these stories told in prose? How is the tone different than the free verse?