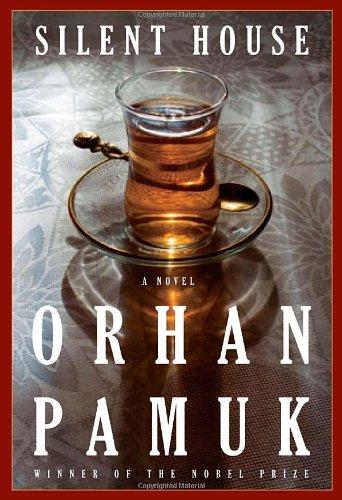 Never before published in English, Orhan Pamuk’s second novel is the story of a Turkish family gathering in the shadow of the impending military coup of 1980.

In an old mansion in Cennethisar, a former fishing village near Istanbul, a widow, Fatma, awaits the annual summer visit of her grandchildren. She has lived in the village for decades, ever since her husband, an idealistic young doctor, ran afoul of the sultan’s grand vizier and arrived to serve the poor fishermen. Now mostly bedridden, she is attended by her constant servant Recep, a dwarf—and the doctor’s illegitimate son. Despite mutual dependency,

Never before published in English, Orhan Pamuk’s second novel is the story of a Turkish family gathering in the shadow of the impending military coup of 1980.

In an old mansion in Cennethisar, a former fishing village near Istanbul, a widow, Fatma, awaits the annual summer visit of her grandchildren. She has lived in the village for decades, ever since her husband, an idealistic young doctor, ran afoul of the sultan’s grand vizier and arrived to serve the poor fishermen. Now mostly bedridden, she is attended by her constant servant Recep, a dwarf—and the doctor’s illegitimate son. Despite mutual dependency, there is no love lost between mistress and servant, who have very different recollections—and grievances—from the early years, before Cennethisar grew into a high-class resort surrounding the family house, now in shambles.

Though eagerly anticipated, Fatma’s grandchildren bring little consolation. The eldest, Faruk, a dissipated historian, wallows in alcohol as he laments his inability to tell the story of the past from the kaleidoscopic pieces he finds in the local archive; his sensitive leftist sister, Nilgün, has yet to discover the real-life consequences of highminded politics; and Metin, a high school nerd, tries to keep up with the lifestyle of his spoiled society schoolmates while he fantasizes about going to America—an unaffordable dream unless he can persuade his grandmother to tear down her house.

But it is Recep’s nephew Hasan, a high school dropout, lately fallen in with right-wing nationalists, who will draw the visiting family into the growing political cataclysm issuing from Turkey’s tumultuous century-long struggle for modernity.

By turns deeply moving, hilarious, and terrifying, Silent House pulses with the special energy of a great writer’s early work even as it offers beguiling evidence of the mature genius for which Orhan Pamuk would later be celebrated the world over.

Orhan Pamuk won the Nobel Prize for Literature in 2006. His novel My Name Is Red won the 2003 IMPAC Dublin Literary Award. His work has been translated into more than sixty languages.

“Essential reading for our times…. In Turkey, Pamuk is the equivalent of a rock star, guru, diagnostic specialist, and political pundit: the Turkish public reads his novels as if taking its own pulse.“—Margaret Atwood, The New York Times Book Review

The novel opens with Fatma and Recep having dinner in their respective quarters of the house. What does this scene suggest about the relationship between the two characters? Did you find anything about Fatma and Recep’s interaction comic or disturbing? As Recep walks through town to the movie theater, how does Pamuk introduce a sense of place and history? How would you describe the atmosphere or tone established by the first chapter?

Chapter 2, “Grandmother Waits in Bed,” employs the stream-of-consciousness narrative that Pamuk uses elsewhere in the novel. What does this form of storytelling reveal about Fatma that you might not otherwise know? Does it ultimately make her more sympathetic? What are the advantages of stream-of-consciousness narration in conveying past events? How does this formal device affect your experience of time in the novel? Is it different from or similar to how you experience time in your own life?

Fatma reflects “I used to think the world was a beautiful place; I was a child, a fool. I close the shutters and fasten the bolt: let the world stay out there” (p. 17). Later, Hasan, humiliated by his awkward interactions with others, thinks, “When that happens I want to be by myself, when a person is by himself he can relax and think about all the great things he could say and do” (34). Similarly, Faruk, while alone in the archives, reads “from individual pages, the millions of lives and stories jumbled together suddenly took discrete form in my mind”; he becomes “quite happy, deciding that this is history, this colorful vital thing that is coming alive in [his] mind” (p. 83). What role does solitude and the life of the imagination play in the novel? In what ways is such a life of the imagination helpful to the characters? In what ways is it harmful? Ultimately, what do you think the novel says about the powers of the imagination?

Storytelling figures as an important theme within Silent House. How do the characters Recep, Fatma, Metin, Hasan, and Faruk employ storytelling to justify their lives and shape their identities? What are the differences and similarities in the way the characters use storytelling?

In chapter 18, “Faruk Needs to Find a Story,” Faruk, a history professor and scholar, has a particularly conflicted attitude toward storytelling. First, he considers that “no doubt … the true appeal of history is the pleasure of the story, the power to divert us” (p. 126) and if he “could only find a good story,” his colleagues would “be completely astonished” (p. 129). Later, however, he thinks that “passion for listening to stories leads us astray every time, dragging us off to a world of fantasy, even as we continue to live in one of flesh and blood” (p. 164); he then despairs: “There’s no way to express history, or even life as it is, in words!” (p. 166). What role do you think storytelling plays in history? Can history be adequately conveyed by facts alone? Can a work of fiction, like Silent House, convey history in ways that history books cannot? From reading this novel, or other works by Orhan Pamuk, what do you think is Pamuk’s view of the role of fiction in relation to history?

In chapter 19, “Recep Serves the Quiet Dinner Table,” Recep considers the silence of the dinner table: “Maybe they finally understood that words are useless. . . . But there are times when words can touch people, too, that I know” (p. 173). Do you think Pamuk agrees with both aspects of Recep’s observation? How does the Silent House respond to or challenge the limits of language? Are there moments in the novel when you were moved by Pamuk’s language? If so, by which passages?

How are the story’s main characters, regardless of class or educational differences, shaped by the effects of orphanhood and illegitimacy? Considering the political and cultural conflicts in the region, what larger commentary might Pamuk be making about Turkey with these motifs?

Both Metin and Hasan appear to be conflicted about money. How is this ambivalence reflected in their behavior? What are the other characters’ attitudes toward money and how do these views affect their actions? Do you think the novel portrays materialism as a symptom or a cause of other issues?

On page 154, Hasan rages against communism, materialism, and imperialism as being to blame for his dire situation. Is there any justification for his suspicions? On page 293, a bedridden Fatma imagines Recep scheming against her. What do you think animates her fears? What connections does the novel suggest exist between powerlessness and paranoia?

Hasan thinks, “I am somebody different, not held down by my past, I have no more memories” (p. 261). Is such surrender of the past possible? What relationship do the other characters have to the past, and does it hinder or help them?

On page 133, Metin thinks: “The thing I called me was like a box within a box; it was like there was always something else inside it, maybe if I kept looking I could finally find my real self and express it, but every new box I opened had, instead of a real, true Metin that I could show to Ceylan, just another box hiding him.” Later, Faruk reflects, “One can only claim self-understanding to a certain point, and beyond that one is babbling, whether one knows it or not. It was an oddly liberating thought while it lasted” (p. 285). What do these two perspectives reveal about Metin and Faruk as well as tPamuk’s portrayal of the self? How might these observations by Metin and Faruck ironically exhibit a sense of self-understanding? In your opinion, which of the characters possess the greatest self-understanding? Which possess the least?

At one point, Hasan thinks: “Woman is a pitiful creature, it’s not right to treat her badly. My mother, for example, is such a good woman! I don’t like people who show them disrespect, guys who only think about going to bed with them, rich guys and materialistic bastards” (p. 211). Later, however, he confesses that “women scare me sometimes” (p. 259). Then, further in the same chapter, he asserts, “I’m a man, I can do anything” (p. 269). Do you see any connection between these seemingly contradictory statements? Although Hasan and Metin come from different socioeconomic backgrounds, do you notice any similarities in their views of women and gender? How are both boys’ attitudes toward women and gender affected by class and culture?

Ömer Selâhattin Kantar (1878–1949) was a noted Turkish archaeologist, museum director, journalist, and playwright. Considering Pamuk’s renown as a journalist, novelist, and museum founder, how might the Nobel Prize–winning author be viewed as a cultural archaeologist? Do you view the respective archival and encyclopedic projects of Faruk and the fictional Selâhattin as misguided or worthy projects? Through these two characters, what might Pamuk be saying about the difficulties and motivations behind any historical or archival project?

Although Faruk and Selâhattin claim to be fiercely secular, how does religion strongly impact both men? Do you see anything religious about their obsessions?

In chapter 28, “Faruk Watches a Belly Dancer,” Faruk states: “I wanted to escape from my own awareness, to wander freely in a world outside my own mind, but understanding now that I would always be two people, I realized that I’d never be able to let go” (p. 292). Why do you think Faruk has this reaction to the dancer’s interaction with the Western tourists? What does the belly dancer signify to him? How might Faruk’s “double-consciousness” reflect Turkey’s cultural and political identity? Could such a dual identity apply to those from other cultures?

Earlier in the novel, Faruk converses with a Turkish man who resembles the American actor Edward G. Robinson and who is berated by his own family for not looking more like the actor; “can’t a person just be himself,” the man complains. Faruk replies that “they’d have just found some other famous original and criticized your inadequate resemblance to him” (p.235). Do you see any connections between Faruk’s reaction to the belly dancer and his conversation with this man?

The last sentence of the novel states: “You can’t start out again in life, that’s a carriage ride you only take once, but with a book in your hand, no matter how confusing and perplexing it might be, once you’ve finished it, you can always go back to the beginning; if you like, you can read it through again, in order to figure out what you couldn’t understand before, in order to understand life” (p. 334). How do you interpret these last lines? What does Fatma seem to understand about her life?

Consider Fatma’s recollection of what Selâhattin tells her is “the most important article” in his encyclopedia: “The source of all knowledge is experimentation” (p. 217). How might a work of fiction like Silent House be an example such experimentation? Can a novelist “trick you with his literary skill” (p. 231) and still produce a work of historical truth?