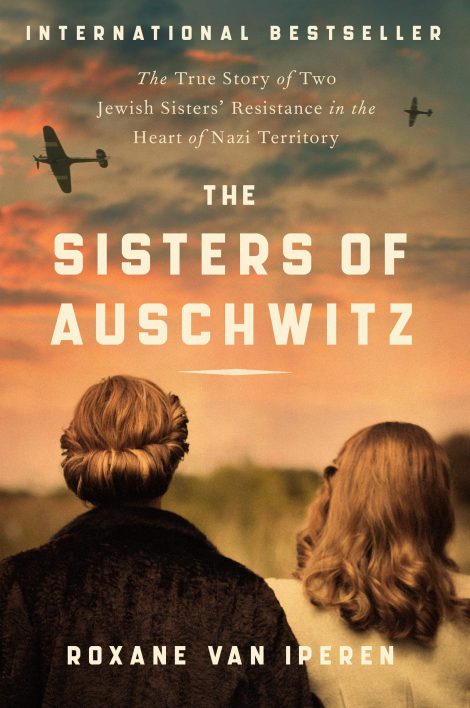 THE SISTERS OF AUSCHWITZ

The unforgettable story of two unsung heroes of World War II: sisters Janny and Lien Brilleslijper who joined the Dutch Resistance, helped save dozen of lives, were captured by the Nazis, and ultimately survived the Holocaust.

Eight months after Germany’s invasion of Poland, the Nazis roll into The Netherlands, expanding their reign of brutality to the Dutch. But by the Winter of 1943, resistance is growing. Among those fighting their brutal Nazi occupiers are two Jewish sisters, Janny and Lien Brilleslijper from Amsterdam. Risking arrest and death, the sisters help save others, sheltering them in a clandestine safehouse in the woods,

The unforgettable story of two unsung heroes of World War II: sisters Janny and Lien Brilleslijper who joined the Dutch Resistance, helped save dozen of lives, were captured by the Nazis, and ultimately survived the Holocaust.

Eight months after Germany’s invasion of Poland, the Nazis roll into The Netherlands, expanding their reign of brutality to the Dutch. But by the Winter of 1943, resistance is growing. Among those fighting their brutal Nazi occupiers are two Jewish sisters, Janny and Lien Brilleslijper from Amsterdam. Risking arrest and death, the sisters help save others, sheltering them in a clandestine safehouse in the woods, they called “The High Nest.”

This secret refuge would become one of the most important Jewish safehouses in the country, serving as a hiding place and underground center for resistance partisans as well as artists condemned by Hitler. From The High Nest, an underground web of artists arises, giving hope and light to those  living in terror in Holland as they begin to restore the dazzling pre-war life of Amsterdam and The Hague.

When the house and its occupants are eventually betrayed, the most terrifying time of the sisters’ lives begins. As Allied troops close in, the Brilleslijper family are rushed onto the last train to Auschwitz, along with Anne Frank and her family. The journey will bring Janny and Lien close to Anne and her older sister Margot. The days ahead will test the sisters beyond human imagination as they are stripped of everything but their courage, their resilience, and their love for each other.

Based on meticulous research and unprecedented access to the Brilleslijpers’ personal archives of memoirs and photos, Sisters of Auschwitz is a long-overdue homage to two young women’s heroism and moral bravery—and a reminder of the power each of us has to change the world.

Roxane van Iperen is a Dutch writer and lawyer who resides in the countryside east of Amsterdam, in the “High Nest,” once a safe house for Jews during World War II. The original Dutch version of The Sisters of Auschwitz was short-listed for the biggest public prize in Holland, NS Publieksprijs’s Book of the Year.

“Offering fascinating insights into Amsterdam’s Jewish Quarter, the fate of the Frank family, and the bonds of sisterly devotion, this standout history isn’t to be missed.”–Publishers Weekly (starred review)

“A truly worthwhile addition to the body of Holocaust studies.”–Kirkus Reviews (starred review)

1. The book starts off with a description of life in Amsterdam during the 1920’s and 1930’s. Why do you think the author choses to begin the story of the sisters, Janny and Lien Brilleslijper, like this?

2. During the first year of the Nazi occupation, Janny’s husband Bob refuses to sign the Aryan declaration for civil servants, and Janny refuses to register as a Jew. Why are these early decisions significant?

3. During the first phase of the war, there is difference between the mentality of Lien, who is optimistic and maybe even naïve about the (possible) German treatment of Jews, and Janny, who is very outspoken about the dangers of giving in to any form of fascist oppression. How do you explain the stark difference between the sisters, and which of those two viewpoints do you think represented that of the general population?

4. Lien, Janny and several of their girlfriends, are pregnant and have babies during the war. Is this something you understand? Does it change your perspective on their resistance activities and the risks they took? Do you have a different opinion towards the fathers in the resistance?

5. Janny describes the process of persecution as a step-by-step strategy, leading towards the “Final Solution’. What (legal) steps can you identify leading up to this? Why do you think this strategy was chosen by the Nazis? How does the appointment of camp commander Albert Gemmeker, in October 1942, fit this strategy?

6. From the first day of going into hiding, the sisters are keen on keeping the entire family together, even if it complicates things. Why do you think this is? Do you think it would have been better and less risky if they had split up into small groups?

7. The Brilleslijper sisters were from a lower class, poor family and had hardly any education. They had little to nothing but were willing to risk everything to help others. The general mentality in the Dutch upper class was to cooperate with the Nazis. Do you think there is any causality between these elements? Should there be?

8. In post-war cinematography and literature, the role of female and/or Jewish resistance is hardly ever mentioned, let alone centered. Why do you think that is, and to what purpose has it served?

9. During their time in hiding in The High Nest, the inhabitants focus on making Jewish culture bloom. Secret musical performances, Yiddish dances and animated political discussions take place, in the middle of Nazi territory. What is the symbolic relevance of this?

10. Lien’s love Eberhard wrote for an underground paper during his stay at The High Nest, and several other friends made sure they left oral testimonies of the Nazi occupation. Is there any relevance to their efforts, and if so, what is their importance?

11. During their stay at The High Nest, the sisters’ little brother Jacob spent most of his time building hiding places and alarm systems in the house. Do you think this was useful, or were they in vain?

12. Keeping all the inhabitants of The High Nest alive was a day job, and they relied on a web of helpers from the surrounding area, like the Bochove family. Do you think you would take the risk of helping people in hiding?

13. Marion van Binsbergen (later: Pritchard) was a very brave young woman, who rescued an entire Jewish family. She was also a killer. Under what circumstances is killing another human being okay, if any?

14. Towards the end of the war, Janny was warned by several friends she was taking too many risks, taking in so many people. Do you think they should have made other choices, and would the outcome have been different?

15. In March of 1943, the ‘Jew hunters’ officially start their activities in the Netherlands. A group of Dutch men bringing in Jews for money. The man taking down The High Nest, Eddy Moesbergen, was sentenced to death after the war, but his sentence was pardoned and he emigrated to New Zealand. How do you think Janny felt about this?

16. The day of the betrayal of The High Nest, Janny has a ‘Sophie’s Choice’ moment. Does she go after her son, and her daughter in The High Nest, or does she run into the woods and escape the Jew Hunters? She chooses the first and is deported to the concentration camps, which she miraculously survived. What would you have done?

17. Janny’s then young son, Robbie, to this day lives with a feeling of guilt that he ran towards the house, indirectly leading his mother to be captured and deported. Do you understand this feeling of guilt?

18. The author chose to write this book in a way that invites readers to accompany the sisters during their wartime experience – particularly Janny towards the end of the book. Do you think that benefits the story or would you have preferred a traditional non-fictional approach?

19. During their stay in Auschwitz and Bergen-Belsen, the sisters used all kind of ways to maintain their humanity. Can you think of some? Do you think it makes any difference in those circumstances?

20. It wasn’t until they were close to home that Janny broke down for the first time. Can you understand why?

21. The numbers of victims of the Shoah and the horrid details of the concentration camps were probably well known to you. Did this book offer you any new insights? Has it changed your perspective on oppression or antisemitism in any way?

23. The author chose a specific composition for the book, reflecting the process of the Final Solution, as visioned by Janny as a ‘funnel’. The book is divided into three parts. The first part is the open end of the funnel: written distantly and factionally, reflecting the attitude that there is still a possibility that ‘all we be well’. The second part takes place inside The High Nest and becomes more personal – it is written more harrowing, with the threat of razzias and the persecution becoming clear. The third part is the inescapable end of the funnel, leading towards the gas chambers, and written in an uncomfortable way for the reader. Do you think this composition benefits the sisters’ story?

The moment we drive onto the woodland path and the house emerges between the trees, we fall in love. It is not quite the ‘little cottage in the country’ we were looking for – this house is enormous and even has a name: The High Nest. Our eyes travel across the majestic façade, brick walls covered with ivy, windows framed by old shutters. It has an air of history and grandeur, but without any of the usual detachment or pretence. On the contrary: the wild woodland garden, tall grass, the rope ladders dangling here and there and the orchard at the back – they call us to come run, play, light fires and spend endless nights talking underneath the stars, undisturbed by civilization. We look at each other and think exactly the same. How lucky we would be to live here.

The inconceivable happens. In the late summer of 2012, my husband and I, our three young children, an Old German Shepherd dog and three cats move into a caravan in the garden of The High Nest, and we embark on the long journey of restoring this extraordinary place to its former glory. Walls are renovated and stairs sanded, panels are removed, revealing ceilings with ingenious beam structures. With our bare hands we tear away the carpets and in almost each room we discover trapdoors in the wooden floors, hiding places behind old panelling. There we find candle stumps, sheet music, old resistance newspapers. And so, along with the renovation of The High Nest, begins the reconstruction of its history. A perplexing history which, as it turns out, includes an important part of the Dutch war years, unknown to most people – even within the vicinity of the house.

I sound out the previous owner, locals, shopkeepers in neighbouring villages, I dive into land registers and archives, and go from one surprise to the next. At the height of the Second World War, as the trains towards concentration camps are driving at full capacity and the Endlösung der Judenfrage, the ‘Final Solution to the Jewish Question’, is well on its way, The High Nest was a large hiding and resistance centre, run by two Jewish sisters. In the following years I become acquainted with the descendants of those who lived in The High Nest. Those who hid there as children return to the house. They offer me their memories and personal documents, so I can give this story colour and the sisters a voice.

Slowly but surely, room by room, the pieces of the puzzle start to form the unbelievable story which now, six years later, is committed to paper. It is a history that confirms my very first feeling: this house is bigger than we are. We are merely the passers-by, lucky enough to live here.