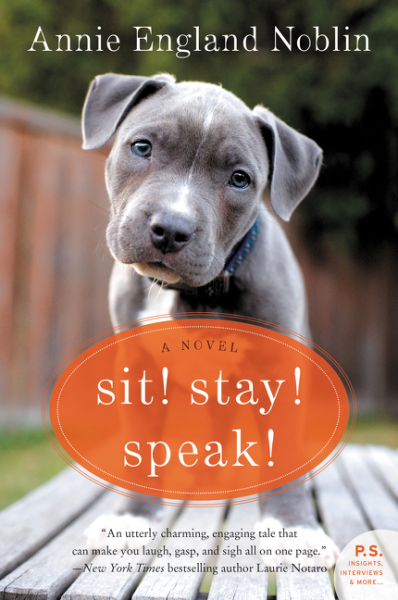 Echoing the novels of Mary Alice Monroe, Allie Larkin, and Holly Robinson, this charming debut novel tells the unforgettable story of a rescue dog that helps a struggling young outsider make peace with the past.

Addie Andrews is living a life interrupted. Tragedy sent her fleeing from Chicago to the shelter of an unexpected inheritance—her beloved aunt’s somewhat dilapidated home in Eunice, Arkansas, population very tiny. There she reconnects with some of her most cherished childhood memories. If only they didn’t make her feel so much!

Echoing the novels of Mary Alice Monroe, Allie Larkin, and Holly Robinson, this charming debut novel tells the unforgettable story of a rescue dog that helps a struggling young outsider make peace with the past.

Addie Andrews is living a life interrupted. Tragedy sent her fleeing from Chicago to the shelter of an unexpected inheritance—her beloved aunt’s somewhat dilapidated home in Eunice, Arkansas, population very tiny. There she reconnects with some of her most cherished childhood memories. If only they didn’t make her feel so much!

People say nothing happens in small towns, but Addie quickly learns better. She’s got an elderly next door neighbor who perplexingly dances outside in his underwear, a house needing more work than she has money, a best friend whose son uncannily predicts the weather, and a local drug dealer holding a massive grudge against her.

Most surprising of all, she’s got a dog. But not any dog, but a bedraggled puppy she discovered abandoned, lost, and in desperate need of love. Kind of like Addie herself. She’d come to Eunice hoping to hide from the world, but soon she discovers that perhaps she’s finding the way back—to living, laughing, and loving once more.

Annie England Noblin lives with her son, husband, and three dogs in the Missouri Ozarks. She graduated with an M.A. in creative writing from Missouri State University and currently teaches English and communications for Arkansas State University in Mountain Home, Arkansas. She spends her free time playing make-believe, feeding stray cats, and working with animal shelters across the country to save homeless dogs.

“SIT! STAY! SPEAK! by Annie England Noblin is a must read for any animal lover.” — Fresh Fiction

“Addie’s story is wrapped up neatly, full of romance, mystery, and a few new furry (and not-so-furry) friends to save the day. A warm, emotionally grounded story that will delight fans of Mary Kay Andrews and contemporary women’s fiction.” — Booklist

This novel deals with issues of home, family, and remembrance. At one point Addie thinks

that if Jonah, her late fiance, were with her he would have “picked through each piece of

furniture” in her late aunt’s home. “He would have asked for stories about each one, stories

Addie had long forgotten.” Are there any mementos or heirlooms in your life that tell a story?

Addie saves Felix from certain death, but Felix is not just a cuddly dog; he’s a pit bull, a breed

that often has a bad reputation. What do you think about the author’s choice in making Felix a

pit bull? Does this make Felix’s gentle disposition more of a surprise to you?

Many people attribute human characteristics to their pets, especially to dogs. In fact, Addie

thinks that Felix “looks a lot on the outside like she felt on the inside. She had a feeling that Felix

wasn’t the only dog to have been dumped bleeding and struggling for his life.” Do you think that

dogs and pets can feel things the way humans do?

Addie resists telling Jasper that Jonah is dead, although she does say he is her “ex-fiance.”

What do you think holds her back from telling him the entire truth at first?

Food means a lot in this novel. At one point Addie finds her aunt Tilda’s recipe box and

remembers her saying, “A woman’s recipes are like her diary. They aren’t meant for anyone

else’s eyes but hers.” Do you agree? Disagree? Why?

At one point Addie enters Redd’s room. Redd is a criminal and yet his room is clean and wellfurnished.

Does this surprise you? Why do you think Redd has such a well put-together place in

such a disorganized and filthy house?

Although the United States is one country, there are regional differences even in today’s

“That’s why people like you never last very long down here.” Do you think that it’s true that you

can’t change an entire culture? Should Addie be trying to change things or not?

born. That’s likely where I’ll die. But it isn’t my home.” What is the difference between home and

where you live? Can they really be two different concepts?

Addie’s neighbor Augustus says that “acting crazy is easier than everything else.” Is this true?

Why do you think he has chosen to act crazy all these years? Has it made his life easier? Or

has it actually cut him off from other aspects of life that could have brought him joy?

In the end, we discover that while crimes against animals are very real, the true crime being

investigated is meth. Did this surprise you? And do you think that television shows such as