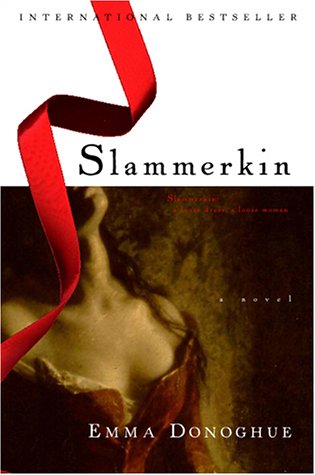 Born to rough cloth in working-class London in 1748, Mary Saunders hungers for linen and lace. Her lust for a shiny red ribbon leads her to a life of prostitution at a young age, where she encounters a freedom unknown to virtuous young women. But a dangerous misstep sends her fleeing to Monmouth and the refuge of the middle-class household of Mrs. Jones, to become the seamstress her mother always expected her to be and to live the ordinary life of an ordinary girl. Although Mary becomes a close confidante of Mrs. Jones, her desire for a better life leads her back to prostitution.

Born to rough cloth in working-class London in 1748, Mary Saunders hungers for linen and lace. Her lust for a shiny red ribbon leads her to a life of prostitution at a young age, where she encounters a freedom unknown to virtuous young women. But a dangerous misstep sends her fleeing to Monmouth and the refuge of the middle-class household of Mrs. Jones, to become the seamstress her mother always expected her to be and to live the ordinary life of an ordinary girl. Although Mary becomes a close confidante of Mrs. Jones, her desire for a better life leads her back to prostitution. She remains true only to the three rules she learned on the streets of London: Never give up your liberty; Clothes make the woman; Clothes are the greatest lie ever told. In the end, it is clothes, their splendor and their deception, that lead Mary to disaster.

Emma Donoghue’s daring, sensually charged prose casts a new sheen on the squalor and glamour of eighteenth-century England. Accurate, masterfully written, and infused with themes that still bedevil us today, Slammerkin is historical fiction for all readers.

Emma Donoghue was born in Dublin in 1969 and earned her Ph.D. in eight-eenth-century fiction at Cambridge. She is the author of three novels, a book of fairy tales, and several works of literary history. She lives in Ontario, Canada.

“What a great read this book is! Donoghue is a real writer, and she’s elevated her racy story close to art.”—The Washington Post Book World

“Superb . . . A novel of real force, filled with unforgettable sights . . . A profoundly entertaining and intelligent book.”—Elle

Slammerkin is based on a real case of a girl who killed her employer in 1763. How do you think this factual basis has affected Emma Donoghue”s writing of the novel? If you had not known that it was based on fact, would you have read Slammerkin differently?

Why do you think an author would choose to set a novel in the past rather than the present? Should novels like Slammerkin be put in the category of historical fiction, or does that make them sound formulaic? Does a story set in the past have to be absolutely true to the facts of history? Which aspects are most important for a realistic writer to get “right”: the physical surroundings, the dates of events or inventions, the dialogue, the mindset of the characters? Might those also be the ones that have been the least documented?

As authors often do, Donoghue has created a protagonist with many unlikeable qualities. What did you find hardest to tolerate about Mary Saunders? What about her character or situation made you keep reading?

According to one of Donoghue”s sources, the real Mary Saunders killed for the sake of “fine clothes”. In the novel, two of the whores” rules are about dress: “Clothes make the woman,” and “Clothes are the greatest lie ever told.” Explore the different things clothes mean to people in Slammerkin.

It could be said that Slammerkin is an archetypal story about the longing for, and the killing of, the mother. Do you agree? Compare the kinds of “mothering” Mary gets from Susan Digot, Doll Higgins, and Jane Jones.

Slammerkin contains some graphic sex scenes. Did these add to or detract from your enjoyment of the book? How did prostitution compare to the other ways women earned a living? Do you think Mary”s prostitution is crucial to the story, or could Donoghue have chosen some other “trade” for her heroine?

In the eighteenth century, the word “family” could mean the whole household, servants included. From Chapter Four on, Slammerkin is told from the points of view of six different members of the Jones”s household. Why do you think Donoghue has done this? How did this broadened focus affect your reading of the second half of the book? Did it make you see Mary differently?

Although American historical novels often include black characters, Slammerkin is unusual in this respect. Why do you think Donoghue gave Abi such a central role in the story? What effect does she have on the other characters” behaviour, and on how we judge them?

Mary Saunders”s trade has made her suspicious of men. Think about how the men she gets to know in Monmouth (Mr. Jones, Daffy, Cadwaladyr) relate to her. Which of them sees her most clearly? Which of them does most to make her question her own hostility?

Is Slammerkin a woman”s story, or an exploration of powerlessness in all its forms? Try to arrange the members of the Jones”s household in a hierarchy, paying attention to their gender, race, age, physical ability, legal position, wealth, and job status. Can you draw a line between the haves and the have-nots? Who is least free, most free?

When Mary Saunders moves from London to the Welsh Borders, she is startled by the many pagan traditions that have survived there. Is this just “local colour”, or does the clash between urban London and traditional Welsh culture play an important part in Mary”s story?

When do you think Mary”s downfall begins: when she starts whoring for Cadwaladyr”s customers? When she breaks off her engagement to Daffy? When she refuses to lend Abi the money? Ultimately, why do you think she kills Mrs. Jones? Is it her choice, or her fate?

It is sometimes said that a novel should only be set in a past era if its story grows out of the specific realities of that era, rather than being a story that could have happened anytime. Do you agree? How much is Mary Saunders a product, or a victim, of her historical moment? How much of your character depends on the circumstances of your upbringing?

Unlike the majority of films and novels, Slammerkin offers no happy ending. Did you find it depressing? What kind of pleasures can be gained from reading about suffering? Could you imagine a plausible “happy ending” for Mary Saunders, before the murder, or even after it?

Slammerkin, set in an era of high birth and mortality rates, is full of dead parents and dead children. With life expectancy in developed nations now in the 70s or 80s, and the birth rate very low, what has changed in the way family members tend to relate to each other today?

Does a historical novel have to comment obliquely on modern life? A century and a half after the murder of Mrs. Jones, how relevant are the novel”s issues (for instance, class, prostitution, slave labour, rural versus urban life, the criminal justice system) to the society we live in now? How much has changed, how much has stayed the same? Does reading Slammerkin make you relieved to be living now rather than then, or is there anything remarkable about that period you feel we have lost?