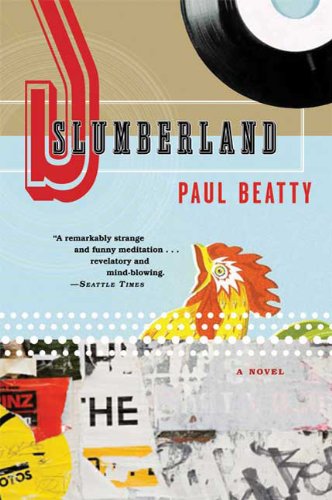 The breakout novel from a literary virtuoso about a disaffected Los Angeles DJ who travels to post-Wall Berlin in search of his transatlantic doppelganger.

Hailed by the New York Times and the Los Angeles Times as one of the best writers of his generation, Paul Beatty turns his incisive eye to man’s search for meaning and identity in an increasingly chaotic world.

After creating the perfect beat, DJ Darky goes in search of Charles Stone, a little-known avant-garde jazzman, to play over his sonic masterpiece.

The breakout novel from a literary virtuoso about a disaffected Los Angeles DJ who travels to post-Wall Berlin in search of his transatlantic doppelganger.

Hailed by the New York Times and the Los Angeles Times as one of the best writers of his generation, Paul Beatty turns his incisive eye to man’s search for meaning and identity in an increasingly chaotic world.

After creating the perfect beat, DJ Darky goes in search of Charles Stone, a little-known avant-garde jazzman, to play over his sonic masterpiece. His quest brings him to a recently unified Berlin, where he stumbles through the city’s dreamy streets ruminating about race, sex, love, Teutonic gods, the preventdefense, and Wynton Marsalis in search of his artistic—and spiritual—other.

Ferocious, bombastic, and laugh-out-loud funny, Slumberland is vintage Paul Beatty and belongs on the shelf next to Jonathan Lethem, Colson Whitehead, and Junot Diaz.

Paul Beatty is the author of two novels, Tuff and The White Boy Shuffle, and two books of poetry, Big Bank Take Little Bank and Joker, Joker, Deuce. He was the editor of Hokum: An Anthology of African-American Humor. He lives in New York City.

Furiously written…another bravura performance from the searingly talented Paul Beatty. A no-holds-barred comedic romp that crushes through the Fulda Gap of Black/White, East/West relationships like an M1 tank.”—Junot Diaz

“A charming barrage of linguistic playfulness that is some of his best work to date.”
—Boston Globe

“With laugh-out-loud parodies of everything from the SAT’s cultural bias to neo-Nazi musical tastes, Slumberland shows that Beatty can still crank out the acerbic riffs…as inimitable as ever. Beatty’s outrageous novel aims to provoke, and it succeeds.” —Time Out New York

Slumberland opens with DJ Darky stepping into a Berlin tanning salon, two days after he and Charles Stone performed a “melody so transcendent that blackness has officially been declared passé.” How does this tanning salon scene set the stage for the novel? Does it appear that DJ Darky succeeded in making blackness “passé?” Why or why not?

Discuss the setting of the novel. Is Berlin the perfect city for DJ Darky and his music? What about Charles Stone? What other cities could potentially inspire and challenge each musician?

Ferguson narrates some of his earliest experiences of race, opportunity, and music while growing up in Los Angeles. What are the key steps that he takes early in life, on his way to becoming DJ Darky?

Young Ferguson, watching an Eskimo student entering a math classroom, observes, “Sometimes just making yourself at home is revolutionary.” How does DJ Darky stage his own revolution in Berlin—what does he do to make himself at home in that race-sensitive city?

DJ Darky claims to have a “phonographic memory”—he remembers every sound he’s ever heard. How does this gift both help and hinder his career? How does it affect his social and romantic life?

What are DJ Darky’s first impressions of Slumberland Bar? How does the bar look and sound on his first visit? How does his affection for the bar change over time?

DJ Darky imagines that the Berlin Zoo’s penguins heeded the advice that a black security guard gave him about Berliners: “You just have to let them love you.” Does DJ Darky adapt like the penguins—does he let Berliners love him? Why or why not?

Before revealing the sources of his near-perfect beat, DJ Darky tells his music collective, “I should warn you before we begin … I’m not necessarily going to tell you the truth.” He says nearly the same thing to Lars before an interview: “Before we begin, I’d like to tell you that not everything I say to you will be the truth.” Why does he repeat this warning? Can the reader trust him to tell the truth, or is DJ Darky an unreliable narrator?

Consider the descriptions of music in Slumberland. How does Beatty evoke the experience of sound through words on a silent page? Which piece—”Southbound Traffic Jam,” Charles Stone’s pornography soundtrack, or DJ Darky’s “The Perfect Beat”—can you imagine best, based on the novel’s description?

The first song that DJ Darky chooses for Slumberland’s jukebox is “Stolen Moments,” by Oliver Nelson, inspired by the sound of a German boy writing “Foreigners Out!” on the bar’s window. Why is an act of hateful graffiti an appropriate choice to kick off the jukebox?

DJ Darky rails against Wynton Marsalis’s modern jazz; compared to Marsalis, “the Schwa’s music is anarchy. It’s Somalia. It’s the Department of Motor Vehicles. It’s Albert Einstein’s hair.” What other metaphors of anarchy could be added to DJ Darky’s list? How does Marsalis’s music measure up against the Schwa’s?

Lars says, “DJs aren’t people, they’re parasites.” According to the novel, are DJs musicians in their own right? How would DJ Darky answer that question? How would Charles Stone?

When he hears on the street that the Wall fell, DJ Darky responds, “What wall?” Why is this “the second-most embarrassing moment” of his life? How does the Stasi agent react to DJ Darky’s ignorance?

By the end of the novel, DJ Darky seems to have figured out who fathered the half sisters Klaudia and Fatima von Robinson. How is each sister’s father reflected in her personality, and in her fate? What role does her father play in Fatima’s tragic death?

In a review of Slumberland in the Washington Post, Kevin Allman writes, “What Gore Vidal did for sex and gender constructs, Beatty does for race and prominent black Americans, with sacred cow-tipping on nearly every page.” Which “sacred cows” of race and culture does Beatty tackle especially well?