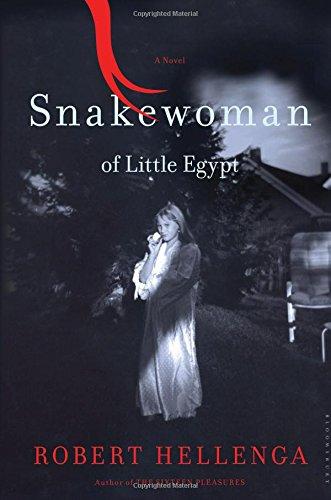 On the morning of her release from prison, Sunny, who grew up in a snakehandling church in the Little Egypt region of Southern Illinois, rents a garage apartment from Jackson. She’s been serving a five-year sentence for shooting, but not killing, her husband, the pastor of the Church of the Burning Bush with Signs Following, after he forced her at gunpoint to put her arm in a box of rattlesnakes.

Sunny and Jackson become lovers, but they’re pulled in different directions. Sunny, drawn to science and eager to put her snake handling past behind her,

On the morning of her release from prison, Sunny, who grew up in a snakehandling church in the Little Egypt region of Southern Illinois, rents a garage apartment from Jackson. She’s been serving a five-year sentence for shooting, but not killing, her husband, the pastor of the Church of the Burning Bush with Signs Following, after he forced her at gunpoint to put her arm in a box of rattlesnakes.

Sunny and Jackson become lovers, but they’re pulled in different directions. Sunny, drawn to science and eager to put her snake handling past behind her, enrolls at the university. Jackson, however, takes a professional interest in the religious ecstasy exhibited by the snakehandlers. Push comes to shove in a novel packed with wit, substance, and emotional depth. Snakewoman of Little Egypt delivers Robert Hellenga at the top of his form.

Robert Hellenga was educated at the University of Michigan and Princeton University. He is a professor at Knox College in Galesburg, Illinois, and the author of the novels The Sixteen Pleasures, The Fall of a Sparrow, Blues Lessons, Philosophy Made Simple, and The Italian Lover.

“Hellenga is fearlessly inventive. Could anybody else combine snake handling, the Ituri pygmies of the Congo, life in a women’s prison, learning to play timpani, a murder trial, and a poignant love affair in three-hundred-odd fast-paced, highly readable pages?”—Maxine Kumin

“Dead solid perfect. The truest and most moving portrait of the romance of research and the lyricism of learning that you will ever find. Plus: a good solid story, right down the center. I loved this book.”—Mary Doria Russell

“Gloriously quirky… three reasons to love Hellenga: He’s a fine storyteller; he gives us new eyes; he restores our sense of wonder. Attention must be paid.”—Kirkus Reviews

“…a captivating and original take on the strange ways of redemption.”—Publishers Weekly

Snakewoman of Little Egypt takes place in 1999 and 2000, a recent past that readers should remember well. What period details from the turn of the millennium come to life in the novel? Why do you think Robert Hellenga set his novel at this time instead of the present day?

As soon as she steps out of prison, Sunny declares, “I used to be Willa Fern. Now I’m Sunny.” (35) What does this new name mean to Sunny? How does her outlook on life change in this moment?

Consider how Sunny and Jackson tell their own stories. How do the chapters in Sunny’s voice differ from the chapters told from Jackson’s point of view?

Discuss what snakes mean to each character in the novel. Why do Earl, DX, and the followers of their church handle snakes? Why are Cramer and Sunny studying them? Why is Jackson drawn to DX’s two-headed snake? What personal, spiritual, and professional possibilities do snakes hold for each of these characters?

How does Claire, Jackson’s ex-girlfriend and occasional lover, change over the course of the novel? Does Claire seem like a trustworthy character when we first meet her? What about at the end of the novel, during and after Sunny’s trial? How does she eventually earn Sunny’s trust and sisterly love?

At the end of her first semester at Thomas Ford University, Sunny says, “I was suddenly overwhelmed with a sense of well-being, a sense that the answers to life’s big questions had fallen into my lap.” (188) What important answers does Sunny learn from each of her classes—French 101, Great Books, English 207, and Biology 120? What big questions still remain unanswered for Sunny?

Discuss Earl’s leadership as the pastor of the Church of the Burning Bush with Signs Following. What are Earl’s values? What mistakes does he make when he is “backed up on the Lord,” and how does he repent? Is he a villain in Snakewoman of Little Egypt? Why or why not?

“For Jackson the Church of the Burning Bush with Signs Following provided a professional opportunity too good to be passed up.” (140). Why is Jackson uniquely qualified for this assignment of “salvage anthropology?” (123) What does Jackson seek in Naqada, and what does he end up finding? Does his research take him closer to the spirituality of the church or further away?

During her trial, Sunny realizes, “And in fact in my own inner courtroom I was on trial for going to Mexico with another man.” (314) Why does Sunny choose Mexico over Paris? How does she atone for her decision?

Warren, Sunny’s uncle, dies before the novel begins, but he has a strong effect on Sunny and Jackson’s lives. What kind of man was Warren, according to Jackson and Sunny’s memories of him? How does Warren manage to help his niece, even after his death?

In the end, why does Jackson return to Africa? Does it seem likely that he finds what he’s looking for, even if Sunny never learns of his whereabouts? Why or why not?

Claire’s novel, Kiss of Death, ends with an engagement in France, while Snakewoman of Little Egypt ends with a breakup and a fresh start. Which ending is more satisfying? Which ending captures the “joie de vivre” that Sunny has been seeking since she left prison? (340)

Robert Hellenga writes that the “two stories . . . are intertwined (like two snakes) in Snakewoman of Little Egypt.” (341) How does the author weave the strands of the novel together? What do the communities of Little Egypt and the Ituri Forest have in common, and how are they different? How does Sunny and Jackson’s love story unite these two worlds, and why does it ultimately drive them apart?