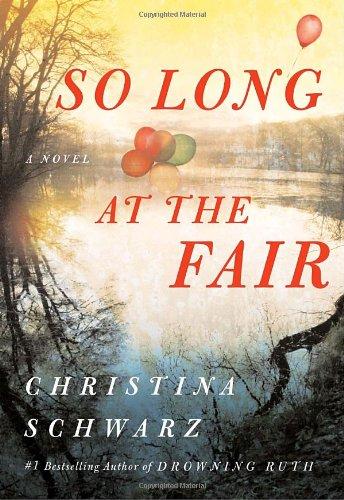 SO LONG AT THE FAIR

The bestselling author of Drowning Ruth returns to the small-town Wisconsin she so brilliantly evoked with this gripping novel about love, marriage, and adultery.

In the summer of 1963 a plot for revenge destroys a career, a friendship, and a family. The consequences of the scandalous event continue to reverberate, touching the next generation. Thirty years later, over the course of one day, Jon struggles to decide whether to end his affair or his marriage. His wife, Ginny, moving closer to discovering his adultery, begins working for an older man who is mysteriously connected to their families’

The bestselling author of Drowning Ruth returns to the small-town Wisconsin she so brilliantly evoked with this gripping novel about love, marriage, and adultery.

In the summer of 1963 a plot for revenge destroys a career, a friendship, and a family. The consequences of the scandalous event continue to reverberate, touching the next generation. Thirty years later, over the course of one day, Jon struggles to decide whether to end his affair or his marriage. His wife, Ginny, moving closer to discovering his adultery, begins working for an older man who is mysteriously connected to their families’ pasts. And Jon’s mistress is being courted by a suitor who may be more menacing than he initially seems. As relationships among the characters ebb and flow on that July day, Christina Schwarz illuminates the ties that bind people together—and the surprising risks they take in the name of love.

As in Drowning Ruth, Schwarz weaves past and present into a richly textured portrait of the secrets and deceptions that simmer beneath everyday life in a small midwestern town. With page-turning intensity and in prose at once lush and precise, she beautifully conjures the emotional labyrinth of a marriage on the brink of collapse and proves that no matter how hard we work to stifle them, the secrets of the past refuse to be ignored.

Betrayal versus loyalty . . . lust versus love . . . infidelity versus honor. Welcome to the complex web of Christina Schwarz’s dazzling new novel, So Long at the Fair.

Christina Schwartz is the author of the critically acclaimed All Is Vanity and Drowning Ruth, a #1 bestseller in both hardcover and paperback, which was selected for Oprah’s Book Club and optioned by Wes Craven for Miramax. She lives in New Hampshire.

“Following one crucial day in a marriage tottering on the brink, Schwarz shows the fragility, complexity, and danger inherent in love. A true American tragedy, full of love as well as despair.” —Kirkus Reviews

“Fans of Christina Schwarz will be thrilled to see that she’s back—and once again displaying her greatest strength as a writer: a deep, almost unnerving empathy for human frailty that lends suspense and poignance to the most “ordinary” of domestic emotional struggles. The way she moves back and forth with such ease among her characters and the way she tells the story of a complex family history through the events of a single day impressed me mightily.” —Julia Glass, bestselling author of Three Junes and The Whole World Over

“Over and over in So Long At The Fair I found myself being torn in different directions. That’s how real this novel feels and that’s how complicated the plot becomes as Schwarz gradually reveals the vexed history of each of her vivid and complex characters. A wonderful and deeply satisfying novel.” —Margot Livesey, author of The House on Fortune Street

“Nobody really knows what goes on in other people’s marriages. Well, nobody except, maybe, Christina Schwarz, who delves with astonishing clarity and honesty into the hearts and heads of those who love, honor, and break all the rules. So Long at the Fair stampedes forward with elegant writing and a swift and noisy plot that held me in its thrall from the first page until the last. Anyone who has ever had a relationship, or is even thinking about having one, should read this book.” —Betsy Carter, author of Swim to Me

So Long at the Fair reveals the perspectives of multiple characters and dual timelines. In what way did this enhance your reading? How would the storytelling have been affected if you had just seen Jon’s point of view?

Jon is portrayed as a perfectionist who is compulsively clean and organized. Yet there are glimpses of areas in his life that defy this, such as an unorganized desk drawer, a car glove box in disarray, and his tendency to misquote the lyrics of well-known songs. What is the significance of these contradictions?

As the novel alternates between 1963 and the present, the link between the two storylines is gradually revealed. Did you draw any early conclusions about how the characters and events might be connected? Were you correct?

How does Christina Schwarz, who was raised in Wisconsin, use this setting as a “character” in her work? How does this setting reflect the characters who inhabit it?

Examine the relationship between Jon and Ginny. Do you believe it was truly love that drew them together in the first place, or did other factors influence them? What do you think eventually drove Jon to be unfaithful?

If you had been Freddi’s close friend, what advice would you have given her?

How did your opinion of Ethan shift throughout the scenes? At what point did you realize his potential to do harm?

What parallels exist between Jon and his father, in terms of their personalities as well as the events that altered their lives?

What do you think really happened between Walter Fleischer and Hattie in 1963? What were your first impressions of him?

How did you react to Marie’s involvement in the events that led to Walter’s car accident in 1963? Do you hold her solely responsible, or did Clark, Bud, or Walter share the blame? Did Bud fully realize the extent of his wife’s deceit?

Discuss the role of Kyle (Jon’s brother) in So Long at the Fair. How might he have influenced Jon’s actions throughout the novel?

What are your theories about Ginny’s reluctance to take a pregnancy test? What was the truth about her struggle to conceive?

Discuss some of the possible interpretations for the novel’s title. What outcomes were foreshadowed in the words So Long at the Fair?

What do you predict for the characters’ futures, including Freddi’s? Do you think Ginny discovers the truth and, if so, does she forgive Jon?

How often does the past repeat itself within generations of families you know personally? Do human beings perpetuate cycles of tragedy, or is that primarily a matter of fate?

Do the dilemmas in So Long at the Fair echo any aspects of the author’s previous novels, Drowning Ruth and All Is Vanity? What makes Christina’s Schwarz’s approach to fiction unique?