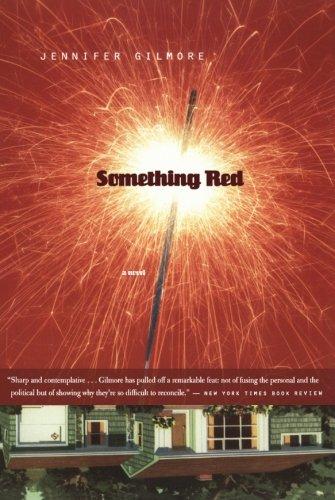 In Washington, D.C., life inside the Goldstein home is as tumultuous as the swiftly changing times. In 1979, the Cold War is waning and the age of protest has come and gone, leaving a once radical family to face a new set of challenges.

Dennis, whose government job often takes him to Moscow, struggles both to succeed in a career he doesn’t quite believe in and to live up to his father’s leftist legacy. Sharon, a caterer for the Washington elite, joins a cultlike group in search of the fulfillment she once felt. Happy-go-lucky Benjamin is heading off to college,

In Washington, D.C., life inside the Goldstein home is as tumultuous as the swiftly changing times. In 1979, the Cold War is waning and the age of protest has come and gone, leaving a once radical family to face a new set of challenges.

Dennis, whose government job often takes him to Moscow, struggles both to succeed in a career he doesn’t quite believe in and to live up to his father’s leftist legacy. Sharon, a caterer for the Washington elite, joins a cultlike group in search of the fulfillment she once felt. Happy-go-lucky Benjamin is heading off to college, there to experience an awakening of social conscience, and sixteen-year-old Vanessa finds a cure for alienation in D.C.’s hardcore music scene. As each of them follows separate trajectories of personal protest and compromise along the edge of a new decade, radical traditions long dormant in their family awaken once again, with shocking, far-reaching results.

A poignant story of husbands and wives, parents and children, activists and spies, Something Red is a masterly novel that unfurls with suspense, humor, and insight.

Jennifer Gilmore’s first novel, Golden Country was published in September ’06 and in paperback in 2007. The novel was a New York Times Notable Book of 2006, an Amazon.com Top Ten Debut Fiction of 2006, and a finalist for the National Jewish Book Award and for the Los Angeles Times Book Prize.

Jennifer’s work has appeared in magazines, newspapers, anthologies and journals including The New York Times Magazine, The Los Angeles Times, Salon and Tin House. She’s had fellowships at the Bread Loaf Writers Conference and the MacDowell Colony, and has taught creative writing at Cornell University, New York University, and Eugene Lang College The New School, where she is currently teaches.

“In this wonderfully funny and compelling story of a splintering suburban family, Gilmore has written an intimate social history of three generations of American Jews.” –Susan Shreve, The Washington Post

“Rendering the Goldsteins with appealing vividness, Gilmore seems mostly interested in their inner lives. She digs deep into their histories — both personal and familial — to get at the root of their beliefs and to hint at their spiraling disenchantment…these characters are crafted with care, conviction and a little self-consciousness — which seems just as it ought to be.”–The Los Angeles Times

“In Jennifer Gilmore’s rich and entertaining novel, Something Red, the personal is political for a Jewish American family in Carter-era Washington, D.C. Communism may be capitulating, the era of protest consigned to the history books, but the lure of radicalism-infidelity, cults, anorexia, espionage-still rocks the Goldstein’s domestic world.” –Elissa Schappell, Vanity Fair

“Jennifer Gilmore’s Something Red is ambitious and provocative, more Molotov cocktail than standard-issue domestic drama, raising profound questions about loyalty, independence, love of family and of country…Gilmore depicts the sometimes paranoid, sometimes exhilarating zeitgeist of the era in every evocative detail of food and music, but even more astonishing is the uncanny way she captures family, in all its messy complexity.” –Liza Nelson, Oprah Magazine

Gilmore includes an epigraph selected from Grace Paley’s “Faith in the Afternoon” that reads “If you have something sensible to say, don’t wait. Shout it out loud right this minute.” Do you think these lines effectively capture the tone of the novel? Why or why not?

The political landscape is a presence that directly affects the lives of the characters. Discuss the political events and situations that were relevant at the time? Do you have any memories of these events?

Food plays an enormous role in the novel—from the grain embargo to Sharon’s cooking, to Vanessa’s eating, to Tatiana’s meringue cookies. Discuss the many contexts in which Gilmore uses food, and the significance in each.

How would you compare the public opinion of Carter and his administration in the story with current attitudes towards the U.S. government? Can you relate to any of the characters in respect to this question? Who, and why?

At the forefront of the novel is Sharon’s “mid-life crisis.” She claims that “she had lost touch with the earth, with the actual ground of this planet, with her home and the people in her home, and that she floated, wholly untethered, unsure as to what her role in the world now was and how she would ever get back down to realize it” (21). Do you think that this phenomenon can be seen as unique to her generation of women? Or is her predicament timeless?

The Olympics surface several times in the novel. Sharon attributes a greater power to the tradition, one that is echoed in Ben’s rally later on. She remembers that “it was the Soviets who swept the medals that year. It was 1956, just before she’d moved East, and they’d watched the Russians participate for the first time; it was as if they were watching the very moment they achieved world domination” (27). Do you think Sharon and Ben were right to believe that the Olympics are “outside” of politics? Has our perception and the importance with which we imbue the Olympics changed in the past three decades?

Dennis muses that “socialism hadn’t saved anyone, had it? People were still hungry and poor and cruel and stupid. It hadn’t changed a thing” (42). It is clear that Dennis sees the misfortune of humanity as inevitably fixed. Which characters might disagree with him? What would they argue in their defense?

Vanessa, a teenager struggling with bulimia, recalls a set of Russian dolls from her childhood: “Looking at them in a descending line, she would wonder if all these pieces together constituted one doll, or if they were really twelve different dolls, with separate selves and souls” (47). How do you think this thought reflects Vanessa’s own struggle with self-identity? Do you think this question of multiple selves carries over to any of the other members of her family?

Ben moves from being a high school athlete who hangs out with his teammates to a more radical, lifestyle when he goes to college. How does this change when he chooses to take action against the Olympic boycott? What parts of his personality do you see merge in these scenes?

Sharon and Vanessa liken Ben’s rally speech to the “call and response of synagogue.” How much does Jewish identity play into the novel? Do you think it is overshadowed by their nationalistic loyalties? Why or why not?

When Ben retrieves Vanessa after their night of partying, he wonders, “just as he said it, what it would mean exactly, but still he told his sister, his little sister, “Vanessa,” he said. “Let me take you home.” (246). What do you think this phrase means to Ben, and the rest of his family? How is it similar or different from Dennis and Sharon’s reconciliation at the Ritz?

Discuss the role of music in the novel. How does it highlight both the differences and the similarities in the various members of the Goldstein family?

All the characters seem to be reacting in some way to the past, whether it’s their own childhoods, or the lives of their parents. How does memory function in the novel and how does the past haunt the present? Does it affect the decisions these characters make? Are they running from the past or are they trying in some way to retrieve the past?

Discuss the significance of the Snow Maiden story, a recurring thread throughout the novel: “The Snow Maiden listened to the song and tears rolled down her cheeks. And then her feet began to melt beneath her; she fell onto the earth and then she was gone, a light mist rising from the place she had fallen” (266).

Were you surprised by the end of the novel? Discuss the importance of secrets and trust in the novel.

In her last moments with Dennis and her husband, Tatiana feels it necessary to clarify that it was, indeed, Helen singing at a Workers Party years before. Why does she do this? What do you make of the rest of her confession? Can you sympathize with her? In what sense?