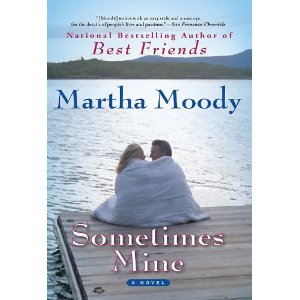 From the author of the runaway bestseller Best Friends comes an engaging new novel of love, loss, and enduring friendship.

Forty-something Genie Toledo has compensated for the mistakes she’s made by throwing herself into her work as a top cardiologist in Columbus, Ohio, and holding everyone-including her college-age daughter-at arms’ length. Only Mick Crabbe-the charming, famous, married college basketball coach with whom she’s had a decade-long affair-can penetrate her shell. That is, until an unexpected turn of events forces Genie to realize just how dependent she is on him and the other people in her life.

From the author of the runaway bestseller Best Friends comes an engaging new novel of love, loss, and enduring friendship.

Forty-something Genie Toledo has compensated for the mistakes she’s made by throwing herself into her work as a top cardiologist in Columbus, Ohio, and holding everyone-including her college-age daughter-at arms’ length. Only Mick Crabbe-the charming, famous, married college basketball coach with whom she’s had a decade-long affair-can penetrate her shell. That is, until an unexpected turn of events forces Genie to realize just how dependent she is on him and the other people in her life.

Martha Moody is the author of the national bestseller Best Friends and The Office of Desire. A practicing physician, she lives in Ohio with her family.

“[Moody] writes with an easy style and a sure eye for the details of people’s lives and passions.” —San Francisco Chronicle

“Moody is brilliant at exposing just how emotionally and morally complex a friendship can be.” —Diane Vreuls, author of Are We There Yet?

“She captures the feel of things, the complexity of human lives, and the ability of time to expose and to heal.” —Josephine Humphreys, author of Nowhere Else on Earth

Sometimes Mine is full of moral questions, and Mick and Genie’s affair looms as the novel’s most significant moral issue. What are your feelings about their affair? As the book progresses, both characters provide justifications for the affair; do these reasons seem sufficient to you? What do you think of Mick describing their relationship on more than one occasion as “platonic friends” (p. 84, see also p. 97 and p. 115)? Would you define their relationship as a “friendship”?

Genie feels a contented marriage requires “enormous resources of forbearance and time and the bizarre ability to simultaneously change and stay the same” and goes on to call a successful marriage “an astonishing feat” (p. 36). Do you agree with her views?

Mick tells Genie often, “‘You heal me, doc,’” and Genie replies, “‘You teach me, coach’” (p. 47). Beyond these somewhat simplified statements, what do you think their relationship fulfills and provides for each of them?

Explore Genie’s relationships with and feelings about the men in the book: her ex-husband; Tessa’s husband; Tessa’s son, Giles; Claudia’s husband, Toby; Mick; her medical practice partners, Jeremy and Howard; even her male patients. Are there any visible patterns?

Genie notes early on in the book that she’s relieved that Mick hasn’t met her daughter, Claudia, nor her best friend, Tessa, because “it frightened me to think of what they’d give away” (p. 22). What do you suppose it is that they might reveal that makes Genie anxious?

Discuss Genie and Claudia’s relationship and how it slowly evolves over the course of the novel. How were Mick’s and Genie’s parenting styles similar when their children were young? Do new similarities exist in Mick’s and Genie’s interactions with their grown children? Just as Claudia begins to show interest in Toby, Genie warns her, “It’s almost…a betrayal for you to plan your life around a man” (p. 64). Discuss the irony in this advice.

Both Genie and Mick are deeply dedicated to their careers. How is our perception of Genie as a character informed by her profession as a cardiologist? Discuss how Mick’s being a college basketball coach defines much of his identity. Is basketball indeed “his mistress” (p. 176), as Karn notes?

Do you think it is right of Mick to ask Genie to examine his daughter Jessica when he learns she’s having chest pains? Genie discovers that Jessica is indeed quite ill, and performs angioplasty and inserts a stent into Jessica—realizing while she’s performing the procedure that she’s putting Jessica’s life in danger. Why do you think Genie goes through with the procedure anyway? Over the course of Jessica’s follow-up office visits with Genie, do the details Jessica provides about her immediate family life offer insights into some of Mick’s behavior with Genie?

Discuss Genie and Karn’s interactions—from before Karn knows about the affair, to her confrontation of Genie, to her long soliloquy-like phone calls to Genie once Mick has cancer, to Karn’s surprising decision to involve Genie publicly in Mick’s funeral, treating Genie essentially as an equally-bereaved family member. What do you think of Mick allowing Karn to surprise Genie at the hotel, without first warning Genie himself that Karn had found out about the affair?

After years of gifts of the drugstore-impulse-buy variety, Mick buys Genie a gleaming blue Jaguar. What might this car come to symbolize for Karn, and for Genie? Do you think Mick saw it as a symbol, or just simply as a gift? What’s the symbolism to be found in Genie giving Claudia an expensive ring with the same rare stone found in a ring that Karn had wanted Mick to buy for Karn, but which he did not?

Do you think Genie made the right choice kicking Mick out of her house? When Mick’s cancer is more developed, he asks Genie if she would let him stay if he were to come to her at this point, and then dismisses his own question with “‘Don’t answer me…I don’t want to know’” (p. 255). Do you think she would have allowed him to stay that second time around? Do you think if Mick hadn’t gotten ill, he would have eventually left Karn to live with Genie in the idealized future Mick and Genie had discussed fairly regularly?