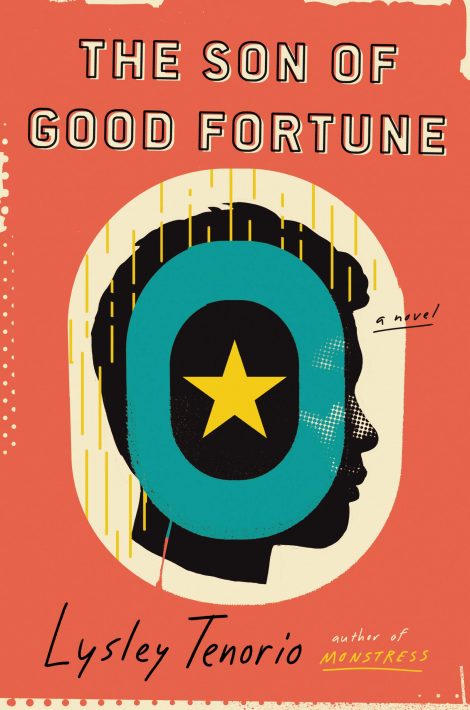 THE SON OF GOOD FORTUNE

From award-winning author Lysley Tenorio, comes a big hearted debut novel following an undocumented Filipino son as he navigates his relationship with his mother, an uncertain future, and the place he calls home.

Excel spends his days trying to seem like an unremarkable American teenager. When he’s not working at The Pie Who Loved Me (a spy-themed pizza shop) or passing the time with his girlfriend Sab (occasionally in one of their town’s seventeen cemeteries), he carefully avoids the spotlight.

But Excel knows that his family is far from normal. His mother, Maxima, was once a Filipina B-movie action star who now makes her living scamming men online.

From award-winning author Lysley Tenorio, comes a big hearted debut novel following an undocumented Filipino son as he navigates his relationship with his mother, an uncertain future, and the place he calls home.

Excel spends his days trying to seem like an unremarkable American teenager. When he’s not working at The Pie Who Loved Me (a spy-themed pizza shop) or passing the time with his girlfriend Sab (occasionally in one of their town’s seventeen cemeteries), he carefully avoids the spotlight.

But Excel knows that his family is far from normal. His mother, Maxima, was once a Filipina B-movie action star who now makes her living scamming men online. The old man they live with is not his grandfather, but Maxima’s lifelong martial arts trainer. And years ago, on Excel’s tenth birthday, Maxima revealed a secret that he must keep forever. “We are ‘TNT’—tago ng tago,” she told him, “hiding and hiding.” Excel is undocumented—and one accidental slip could uproot his entire life.

Casting aside the paranoia and secrecy of his childhood, Excel takes a leap, joining Sab on a journey south to a ramshackle desert town called Hello City. Populated by drifters, old hippies, and washed-up techies—and existing outside the normal constructs of American society—Hello City offers Excel a chance to forge his own path for the first time. But after so many years of trying to be invisible, who does he want to become? And is it possible to put down roots in a country that has always considered you an outsider?

Thrumming with energy and at once critical and hopeful, The Son of Good Fortune is a luminous story of a mother and son testing the strength of their bond to their country—and to each other.

Lysley Tenorio is the author of the novel The Son of Good Fortune and the story collection Monstress, named a book of the year by the San Francisco Chronicle. He is the recipient of a National Endowment for the Arts fellowship, a Whiting Award, a Stegner fellowship, and the Rome Prize from the American Academy of Arts and Letters, as well as residencies from the MacDowell Colony, Yaddo, and the Bogliasco Foundation. His stories have appeared in the Atlantic, Zoetrope: All-Story, and Ploughshares, and have been adapted for the stage by The American Conservatory Theater in San Francisco and the Ma-Yi Theater in New York City. He is a professor at Saint Mary’s College of California.

“When you don’t belong where you are, where exactly do you belong? Lysley Tenorio’s engaging and comic first novel about immigration and identity asks this question with compassion and savage humor.” – Minneapolis Star Tribune

“You know the feeling of picking up a book and realizing within ten pages that what you’re reading is something… special? Something different? Well, that’s what it’s like reading Lysley Tenorio’s novel…. A funny and kind novel about home and identity.”
– Omnivoracious

“Tenorio’s insistence on the specificity of his characters’ dreams and longings is its own kind of argument for their right to be here…. An affecting portrayal of just how potently a parent can shape the expectations of her child…. His story is a tribute to the extreme inner strength it takes to make any life decision look like fate.” – New York Times Book Review

“[The Son of Good Fortune is] a reminder that many experiences comprise the definition of what makes a person American…. Tenorio skillfully sketches out what an all-American boy like Excel experiences in his in-betweenness…. A damning yet clear-eyed acknowledgement that for many, the American dream is merely survival.” – Salon

“Propulsive prose, captivating characters, and vital details of immigrant life…. A masterfully constructed story of identity and ambition and an authentic portrait of one unforgettable Filipino family.” – Kirkus Reviews

“Living with this extraordinarily human undocumented family will make you laugh, weep, and think, sometimes all at once. Tenorio brilliantly makes these characters so original that they’re nearly tangible.” – James Hannaham, author of Delicious Foods

“In this perceptive and sensitive novel, Lysley Tenorio views the troubled American Dream through the eyes of Excel, an undocumented immigrant literally born in the air between the Philippines and the United States. The result, in The Son of Good Fortune, is a nuanced and subtle account of that most basic American dynamic, the melancholic and sometimes devastating fluctuation between promise and failure, happiness and its opposite.” – Viet Thanh Nguyen, author of The Sympathizer

“Lysley Tenorio’s The Son of Good Fortune is flat-out brilliant, and what makes it so wondrous is how Tenorio controls the complexity of the narrative. How can a book be filled with so much humor, such a light touch, and yet still touch that weird place in our heart that can break us apart? Excel and his mother, Maxima, are characters you won’t forget, and the world in which they exist, stuck between belonging and not belonging, does not deserve them.”   —Kevin Wilson, author of Nothing to See Here

“Mordant and moving…. Written with great empathy and sly humor…. This is a wonderful achievement.” – Publishers Weekly (starred review)

Maxima in the dark.

Half-lit by a Virgin Mary night-light and the glow of a screen saver, a slow-motion sweep of stars and planets—Jupiter, Saturn, Earth. Dressed in denim cutoffs and a Mickey Mouse tee, she doesn’t shiver, despite her wide-open bedroom window and the cold night beyond. She sits at the foot of her bed, cleaning her nails with the tip of a switchblade. “May bakas ka bang nakikita sa aking mukha?” she sings. “Masdan mo ang aking mata.” Like all her favorite Filipino love songs, this one is about heartbreak.

An alarm goes off. The digital clock glows red—10:10 p.m. She closes the switchblade.

She stands and stretches, takes quick jabs at the air—one-two, one-two, one-two—then ﬂips on the desk lamp and sits, turns on the ball-shaped webcam atop her monitor. A tap to the space bar and the galaxy vanishes; now her face ﬁlls the screen. Using it as a mirror, she puts on maroon lipstick and dabs with a Kleenex, smiles wide to check her teeth. She undoes her ponytail and shakes out her hair, a long black wave, then turns her face side to side, searching for her best angle. She could easily pass for thirty but is somewhere in her ﬁfties; her true age, she swears, is a mystery, even to herself. Her parents, long since dead, kept no birth certiﬁcate; the grandmother who took her in never bothered to learn her actual birthday.

Eyes closed and ﬁngertips on the keyboard, she whispers to her-self, so softly that a person standing next to her would have no hope of knowing what she says. She takes a deep and slow breath, opens her eyes, types and clicks until another browser window opens.

There is a man on the screen.

“That’s better.” She blows him a kiss.

She leans into the screen. “Ano ba? What happened, Henry?”

“Where to start.” He removes his glasses, the stubbly ﬂab of his cheeks moving up and down as he rubs his temples. He pours a shot of Jack Daniel’s into a coffee mug and recounts his terrible week—more layoffs at the plant and all the guys blame him, his ex-wife trashed the Miami time-share but won’t pay for repairs, his Benz is still in the shop and the best rental he could get is a three-year-old Camry, and just to-day an invitation to his high school reunion—“My freaking fortieth!” he says—arrived in the mail. “But the real downer”—he gulps the whiskey—“is the weather. End of spring and I’m still shoveling snow.”

“Snow, snow, snowy snowy snow,” she sings in a made-up tune. She puts her elbows on the desk, rests her chin on clasped hands. “My whole life, I never see snow.”

“Come to America. To North Dakota.”

“God is always good.” He pours another shot, doesn’t drink. “Come closer. I want your face to ﬁll my screen.”

She leans into the webcam, so close she could kiss it. He says she is the most beautiful woman he has ever seen.

These past three weeks of talking online, he says, are the best he’s had in years. A twice-divorced balding white guy on the edge of sixty doesn’t hope for much, but when he found her proﬁle on Good Catholic Filipinas and saw that her favorite food was sweet-n-sour chicken, that her favorite singer was Shania Twain, and that her lifelong dream was “to live in joy with a good man in God’s country,” he convinced himself to send her a message. “It’s silly to reminisce,” he says, “but life before you seems so long ago. I didn’t realize how lonely I was.”

“And I think that maybe, well, probably, that I might be”—he takes a deep breath, takes the shot—“falling in love with you.”