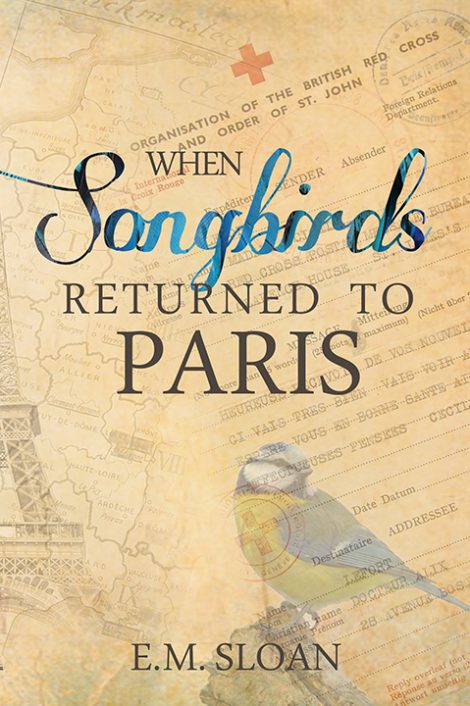 WHEN SONGBIRDS RETURNED TO PARIS

When Germany invades France in 1940, Cecily Lefort can’t imagine how the aristocratic comforts of life as a French doctor’s wife are about to disappear. A return to native England eventually leads Cecily back to France, this time as a secret agent. Cecily is one of 13 female Special Operations Executive (SOE) spies who do not survive to tell their story.

But a 100-year old family-owned photograph of Cecily inspires author E.M. (Elizabeth) Sloan to travel to Paris and investigate the story of Cecily’s life–and death. The intuitive conversation between Elizabeth and Cecily–based on war documents, letters, and interviews–spins an international web of intrigue that captures the raw emotions of love and war.

When Germany invades France in 1940, Cecily Lefort can’t imagine how the aristocratic comforts of life as a French doctor’s wife are about to disappear. A return to native England eventually leads Cecily back to France, this time as a secret agent. Cecily is one of 13 female Special Operations Executive (SOE) spies who do not survive to tell their story.

But a 100-year old family-owned photograph of Cecily inspires author E.M. (Elizabeth) Sloan to travel to Paris and investigate the story of Cecily’s life–and death. The intuitive conversation between Elizabeth and Cecily–based on war documents, letters, and interviews–spins an international web of intrigue that captures the raw emotions of love and war. 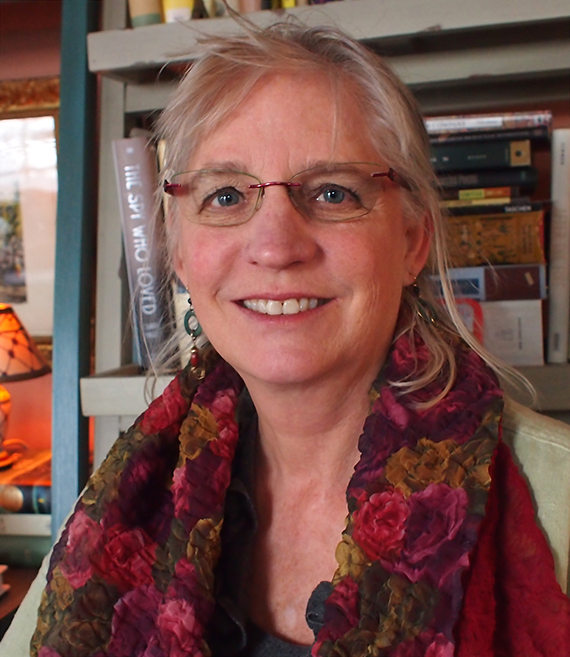 E.M. (Elizabeth) Sloan’s historical nonfiction book, When Songbirds Returned to Paris, is the culmination of more than a dozen years of research involving international travel and correspondence.  As part of this process, she achieved an MFA in creative writing from the University of Idaho.  Sloan’s undergraduate degree (some 40 years ago) came from the University of Iowa. The time between these degrees was filled with various art and graphic design careers, including Better Homes & Garden publishing, Sloan’s own graphic design business, and numerous covers for poetry collections. Her essays “The Scent of Tarweed,” and “Spirit Dog” were both published in Idaho magazine.

In combination with her writing, Sloan also creates one-of-a-kind bookarts and other mixed media works. Her work titled “Our M(Others), Ourselves” was included in a juried BSU exhibit. The creation threads through a 1976 edition of Our Bodies, Ourselves with 17 pages of original narrative imposed throughout the book  “to explore the progressions of the ‘family’ and parenting in the last century.”

“With an innovative narrative structure and lively cast of characters, Elizabeth Sloan’s When Songbirds Returned to Paris weaves a powerful family history set against the backdrop of world war. Sloan’s impressive research reminds us that with enough digging, remarkable, true stories can rise from the dead.”—Buddy Levy, author of Geronimo, Conquistador and River of Darkness

“Your manuscript arrived and I read it in a gulp. Always wanted to know more about Cecily, and here it all is. You weave the story gracefully between revelations of your research and the story itself.”—Curtis Harnack, Executive Director of Yaddo Artists Retreat 1971-87 and author of We Have All Gone Away

1. What other books about the women and men who served as secret agents in Europe during WWII do you recommend? Does Cecily’s story enrich your knowledge of their operations?

2. In what ways does the author’s process of discovery about the life of Cecily Lefort inspire you to research your own family stories?

3. Does the author’s technique of using dialogue between herself and Cecily successfully serve to “report” the events of her life?

4. Of the following historical periods covered in Songbirds, do any of these leave you wanting to know more about that period: the late 1800’s; the early 1900s through WWI; or events leading up to and including WWII?

5. Songbirds is a blend of genres braiding history, biography, and memoir. Are there other structures you identify in this formula of creative nonfiction?

6. Does this blend, as noted above, succeed in drawing upon multiple perspectives to tell this story? Do you think one genre is stronger than another?

7. As a memoir, does the author provide authentic weight for her journey through history­—both world and family—to validate her “insertion” into Cecily’s life?

8. The author imagines many conversations between herself and her subject. Clearly, these conversations did not take place. Why does the author choose this rhetorical device and what is gained by using it?

9. Cecily sometimes “corrects” Lizzie’s interpretation. Does this make Lizzie an unreliable narrator? Or, is it a successful way of moving the story along?

10. The author becomes sensitive for Cecily’s feelings, as their conversation (relationship) develops and truths are revealed. Do you think this might compromise Lizzie’s ability to be objective?

11. Empathy. The world today, yesterday, tomorrow…might only survive with empathy. How can we inspire greater understanding toward each other?

12. What question do you think the author might wish (or dread!) to be asked, but that probably has not been addressed?

Q&A with E.M. Sloan
Based on questions from reading audiences

Q: Do I think of myself as a family historian, or an author?

A: My intention was to make When Songbirds Returned to Paris larger than “just my story” as a family history. That was part of the early challenge, to discover enough information about WWII and the whole Resistance movement to reach a larger audience. When I didn’t have enough information about Cecily, I delved into other Holocaust stories, such as Corrie Ten Boom’s The Attic, and Genevieve de Gaulle’s The Dawn of Hope. The first big break into Cecily’s story came when Jimmy Close sent the copy of Mission Improbable to me from England. That book tells about 15 SOE agents, each in a named chapter. Reading Cecily’s chapter as “The Doctor’s Wife” was the anchor I needed to understand how “real” the history was.

Q: How did I come to the conversation motif?

A: It took about ten years of trying to find a unique way to tell Cecily’s story, without it being “just” another historical chronology or family history. And I had two stories to tell: The story of Cecily’s life, and the story of me uncovering Cecily’s life. I had to figure out how to braid the two stories. I tried alternating chapters between Cecily’s voice and mine, and a chronological thread, but neither one spoke to me as a reader in a way that was different than so many other biographies and memoirs about the Holocaust. And I knew the story’s foundation also needed much more depth and layering than just the WWII portion. I had to understand what influenced Cecily’s choices. I had to have a decade of research that related to the whole of Cecily’s life in order for me to at last feel confident that I had earned the right to get into Cecily’s head, and heart; to listen to her, and to speak for her.

Q: How has writing this book influenced my emotional life?

A: I have found peace for Cecily. There were months, even years, during that 12-year period of research, when I was consumed by thoughts about concentration camps almost 24/7. Literally all my waking hours—from taking a shower, appreciating the warm water and soap, to picking up dog pooh in my yard, trying to imagine the humiliation at every level that was inflicted on the prisoners—for months on end.

Early on in the research process, I met a Jewish woman at a writers’ retreat whose mother had been one of the kinder-transport children. I mentioned how obsessed I was with thoughts about life in the concentration camps. She sighed and said, with some humor, that she often stood at the school fence waiting for her children to come out and thought, “I’m sure I’m the only person here thinking about concentration camps right now.” I still have moments that are loaded with such thoughts, but mostly now when I’m reading another novel or memoir about the Holocaust. So I’ve found peace for myself, as well.

I also thought that the only thing Cecily wanted in her life was to be reunited with Alix. Once I understood, and accepted, that their marriage was troubled, and then learned that Alix asked for a divorce and married Janine, I really struggled with my loyalties. I wanted to only stick up for Cecily, but I had to be open to understanding the truth about her marital relationship. I came to embrace Janine and the daughters she and Alix had. I had to see this as something positive that came out of….I don’t want to say Cecily’s death, but I had to accept the reality that Cecily died, and that love and life came about as a result of these facts.

I believe that I also offered a sense of peace to Janine Lefort when I started collecting the stories about Cecily’s life. I think it gave her permission to no longer feel responsible as the keeper of the story about this mysterious woman who had been her husband’s first wife. In a similar way I provided relief for Sigrun, the vision seeker in Iceland. She said that her intense dreams about Cecily decreased immensely once she and I began sharing information and I took over the role of historian and documenter of Cecily and Alix’s life.

Q: What are you working on now?

A: A collection of essays is my immediate project. I have a couple manuscripts tucked away in boxes that I’d like to cull a few stand-alone chapters and revise as essays. (Both were typed pre-computer, so rewriting will be word by word.) One is an anthology on breastfeeding. I wrote it back around 1995 when, as an older first time mother, I couldn’t find a book that soothed the frustration I had with breastfeeding. I kept a journal of my more than two-year experience (I finally embraced it), and interviewed a few dozen women ranging in age from twenty-somethings up to eighty-year old grandmothers.  The history of social times is fascinating, and with the subject still, amazingly, a topic of controversy, it’s a timeless story that could be brought out as a complete book as well. And, it has a great title.

The other manuscript is a memoir titled Heading Toward Home. This holds a couple animal influenced chapters that are intense and lovely that I want to include in my collection. Another essay will be about the process of writing Songbirds, including new information that has come to light. And, finally (or not) one will be on the now sadly “popular” theme of Alzheimer’s. My generation is dealing with this on all fronts, and I have a dear friend, once my fiancé, who is suffering in the depths of this disease.

I have a couple published essays to include, and I think that I also probably won’t be able to resist writing something about the state of our environment. Oh, and there’s the request from a journal editor to write about dating in the decade of my 60s.

I hope to find a balance between heartbreaking and inspiring.