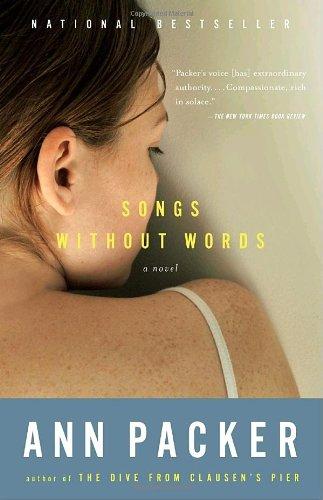 Ann Packer’s new novel centers around two childhood friends, Liz and Sarabeth, as they navigate the challenges of their lives as adults, confront loneliness and near tragedy, and test both the limits and the redemptive power of their friendship.

Songs Without Words is a novel about friendship and about family, but it is also very much about suicide. Sarabeth remarks that Madame Bovary and Anna Karenina, which she is reading at a retirement home, are not so much about adultery as about suicide. Adultery is an issue,

Ann Packer’s new novel centers around two childhood friends, Liz and Sarabeth, as they navigate the challenges of their lives as adults, confront loneliness and near tragedy, and test both the limits and the redemptive power of their friendship.

Songs Without Words is a novel about friendship and about family, but it is also very much about suicide. Sarabeth remarks that Madame Bovary and Anna Karenina, which she is reading at a retirement home, are not so much about adultery as about suicide. Adultery is an issue, too, in Songs Without Words, as Sarabeth struggles to climb out of the wreckage of one adulterous affair and to avoid falling into another. But suicide is the mother lode in this novel, just as it is in Flaubert’s and Tolstoy’s. When Sarabeth’s mother took her own life, which for Sarabeth was a “devastating relief,” it deepened the bond between her and Liz. But decades later, when Liz’s daughter tries to kill herself, it threatens to destroy their friendship. Sarabeth is overcome by her own pain, unable to rise above it enough to comfort Liz, and Liz is outraged by her friend’s failure. A gulf opens between them that seems unbridgeable. And for Liz and her husband Brody, consumed by solitary guilt and anger at each other, their daughter’s suicide attempt has deeply shaken the ground beneath their feet—why hadn’t they seen it coming? why couldn’t they stop it?—unsettling their marriage and dramatically altering their view of themselves and the solidity of life they’d created together.

Part of what makes Songs Without Words so deeply moving–and so terrifying–is its extraordinary level of realism, the way Packer captures both the most subtle and most dramatic emotional currents that spark human behavior. Reading Songs Without Words, one feels immersed not in fiction, but in the lives of real people. Liz and Brody and their children, Joe and Lauren, seem a typical American family, even in—or perhaps especially in—their difficulties with Joe’s soccer games and Brody’s long hours at work and Lauren’s strange moods all representative of the kinds of problems familiar to many upper-middle class families. What Packer shows with such devastating effect is how fragile even the most seemingly normal families can be, how easily despair can well up to engulf someone like Lauren, who in a moment of self-hatred nearly severs herself from life. But, as much as the novel examines unflinchingly the nature of human suffering, it also affirms, in writing that is as vivid and emotionally compelling as any in contemporary American fiction, the healing power of friendship and of love.

Ann Packer received the Great Lakes Book Award for The Dive from Clausen’s Pier, which was a national bestseller. She is also the author of Mendocino and Other Stories. She is a past recipient of a James Michener award and a National Endowment for the Arts fellowship. Her fiction has appeared in The New Yorker, Ploughshares, and other magazines, as well as in Prize Stories 1992: The O. Henry Awards. She lives in northern California with her family.

“Songs Without Words is an eloquent, on occasion harrowing account of friendship and its limits, the mind and its fatal fragilities, and the saving graces of human nature. Packer captures mental pathologies exceptionally well and writes beautifully about despair and love and how they travel together throughout a lifetime.” —Kay Redfield Jamison, author of An Unquiet Mind

“A hauntingly believable portrait of grief. . . . [Packer] shows us that grief is not, for better or for worse, a solitary affair. . . . Slowly and carefully, Packer shows her characters putting their lives back together after a traumatizing blow. . . . The two old friends’ moving reconciliation closes a quiet narrative whose emotions, we come to realize, run deep and true. . . . Commendably ambitious and ultimately rewarding.” —Kirkus Reviews

“A richly nuanced meditation on the place of friendship in women’s lives. . . . Packer gets deep into the perspectives of Liz, Sarabeth and Lauren, and follows out their conflicts with an unsentimental sympathy.” —Publishers Weekly

“Packer writes about adult female friendship with a nuanced understanding of its emotional intensity. . . . One of Packer’s strengths as a writer is her ability to subtly shift tone and voice to bring us into the interior of very different characters. The narrative moves with ease.” —Los Angeles Times Book Review

Ann Packer has been praised for the lifelike quality of her fiction. Do you feel that the friendship depicted here seems especially true to life? Do you find yourself choosing sides with either Liz or Sarabeth?

Why does Lauren attempt to kill herself? What are the immediate and the more suppressed causes? How does Lauren herself explain it?

Thinking back over her relationship with her daughter, Liz imagines herself “bowing to Lauren, acknowledging Lauren. Had she somehow failed to do that? She couldn’t think of anything more important for a mother to do”. Why would nothing be more important than this kind of acknowledgment of one’s child? Why does Liz choose the word “bowing”?

After Lauren has returned from the hospital, Liz admits to Lauren that she and Sarabeth are “having some problems.” After that, Lauren occasionally asks her mother about her relationship with Sarabeth. Do you think Lauren is intentionally pressuring Liz to talk to her? Do you think it’s Lauren’s place to pressure her mother about Sarabeth?

Why doesn’t Sarabeth call Liz immediately when she learns of Lauren’s suicide attempt? Is her reaction selfish or merely self-protective?

Why does Liz tell Sarabeth, “I’m not your mother”? Is she justified in saying this? How does it affect Sarabeth, immediately and ultimately?

Brody describes Sarabeth as “five feet of chaos”. In what ways is this statement true of Sarabeth?

What is the effect of tragedy—the suicide of Sarabeth’s mother and Lauren’s attempted suicide—occurring in such seemingly ordinary, and in Lauren’s case loving, families?

How are Liz and Brody able to repair their marriage? Why does Lauren’s attempted suicide create such anger and distance between them?

What do you think about the hostility between Sarabeth and Brody? Do you think they would have gotten along better if not for their relationships with Liz?

How are Liz and Sarabeth able to restore their friendship? Why is the gift of the bench so important?

What is the turning point in Lauren’s recovery? What is it that really begins to restore her optimism and interest in life?

Songs Without Words, though much of it is concerned with suffering, depression and suicide, ends happily, with the restoration of Liz and Sarabeth’s friendship and Lauren choosing to embrace rather than hide from life. Why does this ending feel right? How does Packer keep the novel from achieving too easy a closure?

What does Songs Without Words reveal about both the strength and fragility of human relationships?