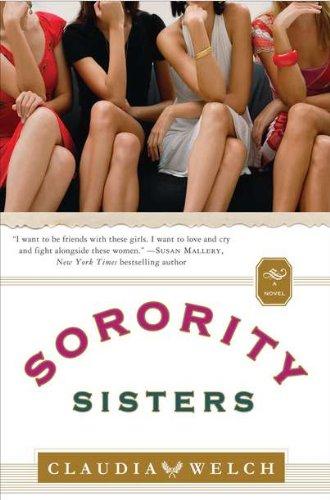 In 1975, trying to find a place to belong, four young women found each other in the same sorority pledge class. Through parties and pranks; finals and skipped classes; boyfriends and break-ups, they forge a bond that takes them by surprise. No one expected it to last beyond college graduation. But some bonds are too strong to break.

In 1975, trying to find a place to belong, four young women found each other in the same sorority pledge class. Through parties and pranks; finals and skipped classes; boyfriends and break-ups, they forge a bond that takes them by surprise. No one expected it to last beyond college graduation. But some bonds are too strong to break.

Claudia Welch has been published in historical romance since 2000. She is a two-time Rita finalist, the award for excellence in romance fiction bestowed by the Romance Writers of America. She is a native Californian, lived for a decade in Connecticut, and now calls North Carolina home.

“Claudia Welch is one of the most gifted authors writing today…Sorority Sisters took me back. I never wanted to come home.”—Lori Handeland, New York Times bestselling author

“Sorority Sisters is so much more and so much deeper than its title. It’s a story about true friendship that will inspire and charm everyone who reads it…These girls sparkle with warmth and wit.”—Liz Carlyle, New York Times bestselling author

Who was your favorite character? Why?

Which character do you identify with the most strongly?

Each character, to some degree, feels her self-worth is determined by what a man thinks of her, particularly in terms of her beauty. Do you think this has changed or is the 21st century essentially like every other century?

Karen’s mother is the most loving and involved of all the mothers represented yet she is a mixed bag. She reinforces the message that girls are judged by their looks; do you think this was kind of her or cruel? What was her motivation?

The four main characters are very different yet they are drawn together and form a firm, lifelong bond. What do you think it is that binds them?

The story is told from the perspective of four women. What was your impression of the men in the book?

Doug Anderson plays a pivotal role in the lives of the women and in their relationship to each other. Have you ever had a man impact your female friendships like that?

Do you know anyone like Laurie, someone who is habitually attracted to the wrong sort of man, the kind who can’t commit?

Ellen’s self-esteem is bruised by her father’s continual mocking of her appearance, yet she’s a fighter by nature. Do you think she was successful in her ability to leave the messages of childhood behind?

In loving Megan, the women see echoes of themselves at her age. Has Megan learned from their experience? Do you think she loves and accepts herself more than they did at the same age? Is it possible for older women to teach younger women to like themselves?

What ideas did you have about sorority girls before reading the book? Did the characters change your perspective or reinforce it?

Did you ever consider joining a sorority? Why or why not? If you were in a sorority, are you happy you joined?