SOUTH OF THE BUTTONWOOD TREE

Blue Bishop has a knack for finding lost things. While growing up in charming small-town Buttonwood, Alabama, she’s happened across lost wallets, jewelry, pets, her wandering neighbor, and sometimes, trouble. No one is more surprised than Blue, however, when she comes across an abandoned newborn baby in the woods, just south of a very special buttonwood tree.

Sarah Grace Landreneau Fulton is at a crossroads. She has always tried so hard to do the right thing,

Blue Bishop has a knack for finding lost things. While growing up in charming small-town Buttonwood, Alabama, she’s happened across lost wallets, jewelry, pets, her wandering neighbor, and sometimes, trouble. No one is more surprised than Blue, however, when she comes across an abandoned newborn baby in the woods, just south of a very special buttonwood tree.

Sarah Grace Landreneau Fulton is at a crossroads. She has always tried so hard to do the right thing, but her own mother would disown her if she ever learned half of Sarah Grace’s secrets.

The unexpected discovery of the newborn baby girl will alter Blue’s and Sarah Grace’s lives forever. Both women must fight for what they truly want in life and for who they love. In doing so, they uncover long-held secrets that reveal exactly who they really are—and what they’re willing to sacrifice in the name of family. 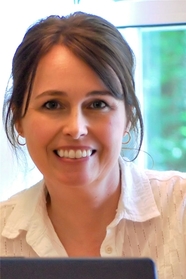 Heather Webber is the national bestselling author of more than thirty novels–including Midnight at the Blackbird Cafe, the Lucy Valentine novels, and the Nina Quinn Mysteries–and has been twice nominated for an Agatha Award. She loves to spend time with her family, read, drink too much coffee and tea, birdwatch, crochet, watch cooking competition and home improvement shows, crochet, and bake. Heather lives in southwestern Ohio and is hard at work on her next book.

“You’d be a dang fool to let her keep that baby. It should go to a loving home.” Oleta Blackstock slapped her hand on the desk, nearly knocking over a pitcher of ice water with her bony elbow.

In his chambers, Judge Quimby pressed his fingers together under his double chin and tried to keep his expression neutral as he studied Oleta’s orange pillbox hat. Mocking gravity, it perched on the side of her head, as defiant and stubborn as she was.

Oleta leaned forward. Coal-black eyes burned with conviction as she said, “Blue Bishop wouldn’t know loving if it jumped up and hit her upside the head. I don’t care one whit what that button said. You know the right decision to make, Judge, seeing as how you know the Bishop family better than anyone. Even better than me.”

Good God almighty he knew the Bishops, all right.

He also knew anyone who truly cared about the infant or her welfare wouldn’t call her “it.”

It was the kind of day in Buttonwood, Alabama, where trouble slipped into town with the breeze, jarring awake sleepy springtime leaves on the massive oaks and sky-high hickories. It scraped parched dirt, sending dust skittering along the trail like it was running for cover. It whistled its warning, plain as day to anyone who cared to listen.

If anyone could recognize the cautionary tune, it was me.

I was a Bishop after all. My family name was practically synonymous with the word trouble. Daddy, Twyla, and my three brothers had embraced trouble like long-lost kin, consequences be damned. And look where that had landed them—each now dead and buried.

I’d done my best for most of my twenty-nine years to avoid trouble at all costs. It was the last thing on earth I wanted, and feeling it swirling around now set my nerves to jumping. I hated any kind of conflict, and my younger sister, Persy, all but personified the term Goody Two-shoes.

Bishop black sheep, both of us.

“What’s wrong?” Marlo Allemand asked as she hiked up a billowy maxi skirt to high-step over a fallen log on the dirt path that led to the Buttonwood Tree, which marked the halfway point on the trail that curved around the town.

I hadn’t realized I’d stopped walking. “Just sensing a bit of trouble in the air all of a sudden.”

“Best just to ignore it,” she said. “Like always.”

The long, dark shadow of trouble had followed me my whole life. Teasing. Taunting. Humiliating. I snapped a sunny dandelion head from its stem and tossed it into a tin pail to join a small pile of other blooms that had suffered a similar fate.

I wiped my hands on old jean shorts, leaving behind a dandelion-yellow streak on the threadbare denim. It was that yellow color I had been searching for out in these woods this morning. Back at home in my art studio, I’d transform the decapitated dandelion into ink, along with any other flowers, roots, nuts, and bark I found.

Those weren’t the only items I was looking for out in the woods this morning, however. I was always and forever on the hunt for … something else. Something I couldn’t identify. Something I’d been searching for my whole life long, pushed along by the hands of an insistent wind that was always seeking the lost.

Following its lead, I had a knack for finding things. Watches and wallets and Moe, Marlo’s husband, who tended to wander. It was a skill I didn’t fully understand since I had no control over it, but I couldn’t argue it came in handy once in a while. But as of yet, that unique ability hadn’t led me to the one thing I’d been looking for … forever. The thing that drove these adventures into the woods. The thing that gnawed my soul and made me restless.

The lost thing that had no name.

I had the feeling the wind would let me know what it was when I found it, but as of yet I’d had little luck.

So I kept looking. Turning botanicals into inks to supplement store-bought art supplies was a great excuse to wander the woods most mornings. I was a children’s picture book author and illustrator, and I was grateful for any escape into my fictional world. I was almost done with another book in my popular series about a young, headstrong but shy rabbit who, like me, could find things, though her adventures were much more fun. In the book I was working on, Poppy Kay Hoppy would rather ballet dance than take a hip-hop class like the other rabbits, and it was near impossible to think about my worries while drawing a tutu-wearing bunny.

Marlo and I walked in comfortable silence for a while before I said, “I got a call last night about someone wanting to look at the farmhouse. Sarah Grace Fulton.”

With every step she took, Marlo’s hiking sandals and a glimpse of her vibrant-red toenails peeked out from the bottom of her skirt. “Well, isn’t that interesting.”

“Mighty. I gave her the code for the lockbox—she’s looking at it today.”

I’d been trying to sell the family farmhouse for more than a year now, but showings were few and far between. Its value had plummeted in the decades my family had lived there, and even though I was selling it as a “for sale by owner” at a rock-bottom price, no one had made a single offer on the house, lowball or otherwise. I could hardly blame potential buyers. I didn’t want to live there, either. I had moved out as soon as I could afford a place of my own six years ago.

A twig cracked loudly from within the woods, and Marlo and I both pivoted toward the noise. Something moved at a quick pace through the densely packed trees and brush.

“Deer?” she asked, squinting into the shadows.

“I’m not sure.” The woods fell quiet as if they, too, were listening. After a moment, the birds began singing again, the bugs buzzing. Whatever had caused the snapping twig was gone now.

Marlo picked up the conversation. “I have a good feeling about the showing. That house only needs one person to see its full potential.”

Cicadas droned as I plucked another dandelion and grinned. “Or it needs a wrecking ball.”

Her dark skin glistened in the dappled morning light as she swatted at me, but there was a smile on her face. “Better to fix it up than knock it down. It’s got good bones, that house. Seems to me Sarah Grace is the perfect buyer.”

Good bones but a sordid history. My daddy, Cobb, had won it in a card game. Cheating at cards, though no one could ever prove it—and many had tried. “I hope so, because I could surely use the extra money.” I held up a hand. “And before you ask, no, I haven’t made the phone call to the adoption agency yet.”

Marlo lifted the brim of her floppy straw sun hat, smoothed charcoal-gray hair streaked with strands of silver, and swatted a gnat away from her ear. A thin, judgmental eyebrow arched.

“I’ve been busy. My book is due in a few weeks. And with Persy being home from college for the summer…”