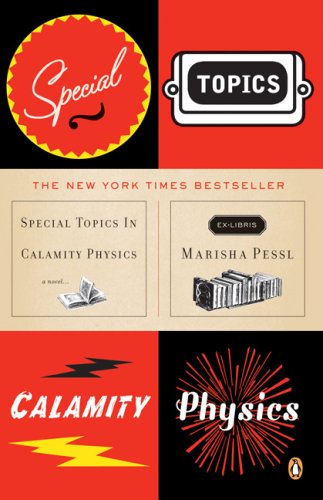 “Dazzling,” (People) “Exuberant,” (Vogue) “marvelously entertaining,” (The Dallas Morning News)—Marisha Pessl’s mesmerizing debut has critics raving and heralds the arrival of a vibrant new voice in American fiction. At the center of this “cracking good read” is clever, deadpan Blue van Meer, who has a head full of literary, philosophical, scientific, and cinematic knowledge. But she could use some friends. Upon entering the elite St. Gallway school, she finds some—a clique of eccentrics known as the Bluebloods. One drowning and one hanging later, Blue finds herself puzzling out a byzantine murder mystery.

“Dazzling,” (People) “Exuberant,” (Vogue) “marvelously entertaining,” (The Dallas Morning News)—Marisha Pessl’s mesmerizing debut has critics raving and heralds the arrival of a vibrant new voice in American fiction. At the center of this “cracking good read” is clever, deadpan Blue van Meer, who has a head full of literary, philosophical, scientific, and cinematic knowledge. But she could use some friends. Upon entering the elite St. Gallway school, she finds some—a clique of eccentrics known as the Bluebloods. One drowning and one hanging later, Blue finds herself puzzling out a byzantine murder mystery. Nabokov meets Donna Tartt (then invites the rest of the Western Canon to the party) in this novel—with “visual aids” drawn by the author—that has won over readers of all ages.

“This skylarking book will leave readers salivating for more. The joys of this shrewdly playful narrative lie not only in the high-low darts and dives of Pessl’s tricky plotting, but in her prose, which floats and runs as if by instinct, unpremeditated and unerring.”
—The New York Times Book Review

Blue describes herself as a “Jane Goodall,” an observer not a main actor. She is quiet, in thrall to her father, bookish, and solitary. What did you think of her when we first meet her? How does she change over the course of the novel? At the end, what new characteristics has she acquired?

Her father, Gareth van Meer, is her opposite: charming and callous, verbose and secretive. He dazzles women, is adored by his students, and is completely committed to his daughter. Yet there are clues that all is not right with Gareth. Go back to some passages in the book where Blue hints that he is hiding something, such as when she describes her frightening apprehension, at the age of eleven, that he is a “terrifying, red-faced stranger bearing his dark, moldy soul” (p. 33). What is your opinion of him at the novel’s conclusion?

The relationship between Blue and her father changes over Blue’s senior year. At the start she loves and trusts him unconditionally, but at the end she has hard questions for him. How does Blue’s attitude toward him begin to change? Does he alter the way that he treats her? Try to imagine their future relationship; how might they feel toward each other?

The death of Hannah Schneider, movie-star beautiful and charismatic, is the mystery at the heart of the novel. Who was Hannah Schneider? What does Blue learn about her past, and about how they are linked? Do you have sympathy for Hannah? Was she well-intentioned or do you think she was disturbed and dangerous?

Hannah takes Blue under her wing and includes her in the group of students, the Bluebloods, that she has befriended and mentored. Why is she so interested in Blue? How does she encourage Blue to act? Try to think of what she provides for each of them that they wouldn’t otherwise have, the way she “reads” each of them “so you thought you were her favorite paperback” (p. 322). Is she a good influence on Blue and the others?

Small-town America is also a subject of this book; Gareth is a “perennial visiting lecturer,” who raises Blue in a series of obscure towns throughout America. Think back to some of the places that they have lived, and the accompanying Americana—the Wal-Marts, chain restaurants, and suburbs that Blue and her father drift through. How would you describe this America? How is it different from other, more mainstream, depictions of the country? Do you recognize these places? What do you think Blue thinks of them?

Zach Soderberg seems to Blue at first to be bland and simple, a regular guy who does not attract her as the wild and nonconformist Bluebloods do. But what does Zach offer that the others cannot? What do you think he sees in Blue? Why do you think the Bluebloods are so disparaging toward him? What role does he play in Blue’s transformation?

Blue calls her father’s endless stream of romantic conquests “June Bugs,” saying “Dad picked up women the way certain wool pants can’t help but pick up lint” (p. 29). What is her relationship to some of these women like? Does she grow more sympathetic to them? Consider some of the specific encounters Blue has with women Gareth is involved with. What does the incident with “Kitty,” in particular, teach her?

The Bluebloods are mesmerizing but merciless and are at first cruel even to Blue. How would you describe them as a clique? Individually? Which of them grow more sympathetic, and which become kinder toward Blue? Are any of them redeemed by the end of the story?

The relationship between ideology and violence is a subtext that turns into a main theme. Who is particularly ideological or political in this book? What do they believe in and advocate for? Try to trace Gareth van Meer’s beliefs, in particular, by returning to earlier passages in the novel where Blue mentions his ideas, reading material, or lectures.

At the end of the book, Blue is faced with a hard choice about the information she has uncovered. How does she act and why? Though he never says, do you think her father is proud of her ultimate decision about the secret she uncovers? What does her decision, which costs her plenty, tell you about Blue’s morals and inner strength? What would you have done?

Much of the investigation that Blue undertakes depends on her interpreting various clues and events correctly. Sometimes she succeeds, sometimes she fails. Who attempts to mislead her, and how do they do it? What enables her to grow better at understanding the machinations of the adults around her? Do you agree with her final assessment of the mystery at the heart of her origins and of the novel? Or do you agree with Gareth that “we are under an invincible blindness as to the true and real nature of things” (p. 261)?