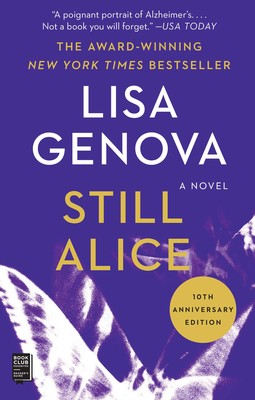 Alice Howland, happily married with three grown children and a house on the Cape, is a celebrated Harvard professor at the height of her career when she notices a forgetfulness creeping into her life. As confusion starts to cloud her thinking and her memory begins to fail her, she receives a devastating diagnosis: early onset Alzheimer’s disease. Fiercely independent, Alice struggles to maintain her lifestyle and live in the moment,

Alice Howland, happily married with three grown children and a house on the Cape, is a celebrated Harvard professor at the height of her career when she notices a forgetfulness creeping into her life. As confusion starts to cloud her thinking and her memory begins to fail her, she receives a devastating diagnosis: early onset Alzheimer’s disease. Fiercely independent, Alice struggles to maintain her lifestyle and live in the moment, even as her sense of self is being stripped away. In turns heartbreaking, inspiring and terrifying, Still Alice captures in remarkable detail what’s it’s like to literally lose your mind…

Reminiscent of A Beautiful Mind, Ordinary People and The Curious Incident of the Dog in the Night-time, Still Alice packs a powerful emotional punch and marks the arrival of a strong new voice in fiction.

Lisa Genova, a first-time novelist, holds a Ph.D. in neuroscience from Harvard University and is an online columnist for the National Alzheimer’s Association. She lives with her family in Massachusetts.

“Heartbreakingly real…. So real, in fact, that it kept me from sleeping for several nights. I couldn’t put it down….Still Alice is a story that must be told.” —Brunonia Barry, New York Times bestselling author of The Lace Reader

“After I read Still Alice, I wanted to stand up and tell a train full of strangers, ‘You have to get this book.'” —Beverly Beckham, The Boston Globe

“A masterpiece that will touch lives in ways none of us can even imagine. This book is the best portrayal of the Alzheimer’s journey that I have read.” —Mark Warner, Alzheimer’s Daily News

1. When Alice becomes disoriented in Harvard Square, a place she’s visited daily for twenty-five years, why doesn’t she tell John? Is she too afraid to face a possible illness, worried about his possible reaction, or some other reason?

2. After first learning she has Alzheimer’s disease, “the sound of her name penetrated her every cell and seemed to scatter her molecules beyond the boundaries of her own skin. She watched herself from the far corner of the room”. What do you think of Alice’s reaction to the diagnosis? Why does she disassociate herself to the extent that she feels she’s having an out-of-body experience?

3. Do you find irony in the fact that Alice, a Harvard professor and researcher, suffers from a disease that causes her brain to atrophy? Why do you think the author, Lisa Genova, chose this profession? How does her past academic success affect Alice’s ability, and her family’s, to cope with Alzheimer’s?

4. “He refused to watch her take her medication. He could be mid-sentence, mid-conversation, but if she got out her plastic, days-of-the-week pill container, he left the room”. Is John’s reaction understandable? What might be the significance of him frequently fiddling with his wedding ring when Alice’s health is discussed?

5. When Alice’s three children, Anne, Tom and Lydia, find out they can be tested for the genetic mutation that causes Alzheimer’s, only Lydia decides she doesn’t want to know. Why does she decline? Would you want to know if you had the gene?

6. Why is her mother’s butterfly necklace so important to Alice? Is it only because she misses her mother? Does Alice feel a connection to butterflies beyond the necklace?

7. Alice decides she wants to spend her remaining time with her family and her books. Considering her devotion and passion for her work, why doesn’t her research make the list of priorities? Does Alice most identify herself as a mother, wife, or scholar?

8. Were you surprised at Alice’s plan to overdose on sleeping pills once her disease progressed to an advanced stage? Is this decision in character? Why does she make this difficult choice? If they found out, would her family approve?

9. As the symptoms worsen, Alice begins to feel like she’s living in one of Lydia’s plays: “(Interior of Doctor’s Office. The neurologist left the room. The husband spun his ring. The woman hoped for a cure.)”. Is this thought process a sign of the disease, or does pretending it’s not happening to her make it easier for Alice to deal with reality?

10. Do Alice’s relationships with her children differ? Why does she read Lydia’s diary? And does Lydia decide to attend college only to honor her mother?

11. Alice’s mother and sister died when she was only a freshman in college, and yet Alice has to keep reminding herself they’re not about to walk through the door. As the symptoms worsen, why does Alice think more about her mother and sister? Is it because her older memories are more accessible, is she thinking of happier times, or is she worried about her own mortality?

12. Alice and the members of her support group, Mary, Cathy, and Dan, all discuss how their reputations suffered prior to their diagnoses, because people thought they were being difficult or possibly had substance abuse problems. Is preserving their legacies one of the biggest obstacles to people suffering from Alzheimer’s disease? What examples are there of people still respecting Alice’s wishes, and at what times is she ignored?

13. “One last sabbatical year together. She wouldn’t trade that in for anything. Apparently, he would”. Why does John decide to keep working? Is it fair for him to seek the job in New York considering Alice probably won’t know her whereabouts by the time they move? Is he correct when he tells the children she would not want him to sacrifice his work?

14. Why does Lisa Genova choose to end the novel with John reading that Amylex, the medicine that Alice was taking, failed to stabilize Alzheimer’s patients? Why does this news cause John to cry?

15. Alice’s doctor tells her, “You may not be the most reliable source of what’s been going on”. Yet, Lisa Genova chose to tell the story from Alice’s point of view. As Alice’s disease worsens, her perceptions indeed get less reliable. Why would the author choose to stay in Alice’s perspective? What do we gain, and what do we lose?