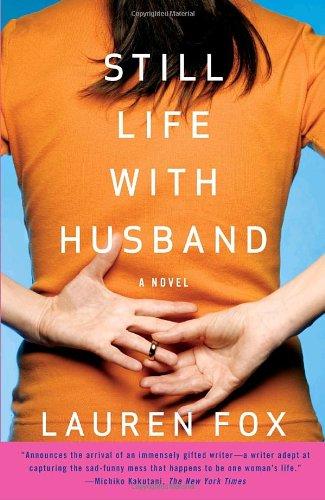 Meet Emily’s husband, Kevin, a sweet technical writer with a passion for small appliances and a teary weakness for Little Women.

Enter David, a sexy young reporter with longish floppy hair and the kind of face Emily feels the weird impulse to lick.

In this captivating novel of marriage and friendship, Lauren Fox explores the baffling human heart and the dangers of getting what you wish for.

Meet Emily’s husband, Kevin, a sweet technical writer with a passion for small appliances and a teary weakness for Little Women.

Enter David, a sexy young reporter with longish floppy hair and the kind of face Emily feels the weird impulse to lick.

In this captivating novel of marriage and friendship, Lauren Fox explores the baffling human heart and the dangers of getting what you wish for.

Lauren Fox earned her MFA from the University of Minnesota in 1998. Her work has appeared in The New York Times, Utne, Seventeen, Glamour, and Salon. She lives in Milwaukee with her husband and daughter. Still Life with Husband is her first novel.

“A delightful new voice in American fiction, a voice that instantly recalls the wry, knowing prose of Lorrie Moore crossed with the screwball talents of the cartoonist Roz Chast.” —Michiko Kakutani, The New York Times

“Any woman who’s ever found herself looking at her life and wondering how on earth she wound up there will relate to the characters in this funny, honest novel.” —Jodi Picoult, author of Nineteen Minutes

“Fox gives us an all-too-real glance into what most married people have at one time or another wondered about (if not acted upon): the thrill-ride of illicit love. Emily’s first-person narrative may be laugh-out-loud funny, but it’s also an honest, compassionate look at the heartbreak of misplaced intimacy.” —Amy Woods Butler, St. Louis Post-Dispatch

“Read Still Life with Husband for its funny, winning voice and an ending that could be debated by book clubs for months to come.” —Ann Oldenburg, USA Today

What does Emily’s dream in the opening scene say about Emily’s state of mind, and her marriage? How effective is it as a prelude to the story that follows?

Emily and Meg joke that they want to start a girl group called ‘N Secure. Emily suggests, “I’ll be the drummer . . . but I’ll just drum really quietly. And after every song we can kind of sidle up to the microphone and say, ‘Was that okay?'”. How would you characterize Emily’s sense of humor? What scenes or passages do you find most funny in the novel?

In her conversation with Meg about Meg’s pregnancy, Emily is ashamed to admit that she is unsure she’ll ever be ready to have a baby. Why is this something Emily feels guilty about?

Discuss the scene in the café when Emily meets David. Is agreeing to meet him for coffee okay, or not okay? Is Meg right in saying “there’s a line, you know, and it seemed like you crossed it”? What does Meg mean by “a line,” and do you agree that Emily crossed it? How much freedom can, or should, married women have in this kind of situation?

How sympathetic a character is Kevin? Does he come across as a solid, dependable man who loves his wife? Or as a conventional, controlling person who wants to push Emily into a life she doesn’t want? Noticing his reading material, Sound Investments for the Careful Planner, Emily feels “a familiar pang of love for my steady, staid husband. He’s like a brick wall you can lean against when you’re tired-immobile, rutted with predictable grooves, always there”. What does this thought indicate about Emily’s feelings toward Kevin?

Is Emily’s friendship with Meg more important to her, in a sense, than her marriage to Kevin? What does the friendship suggest about women’s bonds with each other as opposed to their bonds with their spouses?

Emily wonders whether her restlessness is caused by marriage itself: “Being married is like reading the same novel over and over again. You might discover new subtleties of language on the twenty-millionth read-through, a metaphor or two you’d missed before, but the plot is always the same. Kevin is in a bad mood, and there’s nothing I can do about it: chapter six”. Is Emily right about the inherent problems in marriage? If so, should she allow herself, at least briefly, the excitement of getting to know David?

While the tone of the novel is mostly comic, events such as Meg’s successive miscarriages and Emily’s accidental pregnancy are evidence of a greater seriousness that is also important to the story. Meg and Emily are only thirty; does it seem as though they are having difficulty finding the maturity to handle what is happening in their lives?

Emily is overwhelmed by guilt when she acknowledges the seriousness of cheating on Kevin. Realizing she may be pregnant, she thinks, “I’m not a good person; I’m not the Emily I thought I was”. How important is this realization, and what does it suggest about people’s perceptions of themselves?

The dilemma of Emily’s pregnancy is that she doesn’t know whether the father is Kevin or David. How does this fact affect your experience of the story, and of Emily’s character? Does her impulsive behavior with David-“propelled by a combination of longing and recklessness” -seem understandable, if unlucky, or on the other hand, does it seem self-destructive, as well as cruel to Kevin?

Why does Emily tell Kevin she’s pregnant before she knows who the father is? It raises the question of whether there might have been some way of determining the child’s paternity-a DNA test on the amniotic fluid perhaps-which would have allowed her to proceed with more certainty. Why do you think Fox chose not to pursue such a plotline?

Emily’s mother tells her, “You married a kind, gentle, intelligent man who doesn’t seem to place much value on the fine art of communication. Darling, you married your father. Perhaps you could have done better. But believe me, you could have done worse”. Why does this conversation enrage Emily?

Fox creates several scenes that center on Emily’s parents, their suburban home and its décor, the food her mother prepares, etc. What is funny about Emily’s family? Does she feel trapped by who her parents are? Does it seem that Emily regresses when she is around her family? Do most people tend to do so?

Her sister Heather is angry with her for revealing her pregnancy on the same night that Heather was planning to introduce her fiancé to her parents. Is Emily wrong in choosing this moment? What is Emily planning, or thinking, about her future at this point?

In what ways is the ending surprising? How disturbing is the idea that Emily is now completely on her own, and will soon be a single mother? What is the significance of Emily’s visit to Jupiter’s Palace of Cheese, first described on page 59?