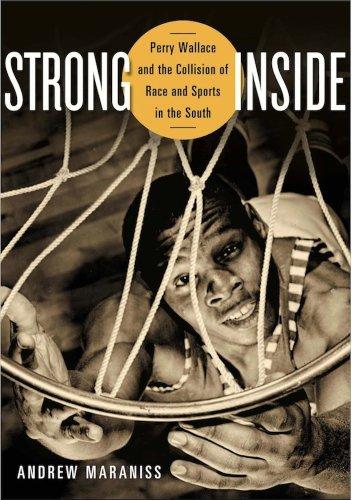 Strong Inside is the untold story of Perry Wallace, who in 1966 enrolled at Vanderbilt University and became the first African-American basketball player in the Southeastern Conference. Strong Inside is not just the story of a trailblazing athlete, but of civil rights, race in America, a campus in transition during the tumultuous 1960s, the mental toll of pioneering, decades of ostracism, and eventual reconciliation and healing.

This fast-paced, richly detailed and meticulously researched biography digs deep beneath the surface to reveal a more complicated, illuminating and rewarding story of sports pioneering than we’ve come to expect from the genre.

Strong Inside is the untold story of Perry Wallace, who in 1966 enrolled at Vanderbilt University and became the first African-American basketball player in the Southeastern Conference. Strong Inside is not just the story of a trailblazing athlete, but of civil rights, race in America, a campus in transition during the tumultuous 1960s, the mental toll of pioneering, decades of ostracism, and eventual reconciliation and healing.

This fast-paced, richly detailed and meticulously researched biography digs deep beneath the surface to reveal a more complicated, illuminating and rewarding story of sports pioneering than we’ve come to expect from the genre. First-time author Andrew Maraniss masterfully unfolds the unique life story of Wallace, the rare slam-dunking basketball star who was also a valedictorian, engineering double-major, law school graduate, and university professor. Wallace’s unusually insightful and honest introspection reveals his inner thoughts throughout his journey.

Wallace entered kindergarten the year that Brown v. Board of Education upended “separate but equal.” As a 12-year old, he snuck downtown to watch the sit-ins at Nashville’s lunch counters. In 1963, he entered high school a week after Martin Luther King’s “I Have a Dream” speech. While in high school, he saw the passage of the Civil Rights and Voting Rights acts, and his Pearl High basketball team won Tennessee’s first integrated state tournament. The world seemed to be opening at just the right time, and when Vanderbilt recruited him, Wallace courageously accepted the assignment to desegregate the SEC. His experiences on campus and in the hostile gymnasiums of the Deep South turned out to be nothing like he ever imagined.

On campus, he encountered the leading civil rights figures of the day, including Stokely Carmichael, Martin Luther King, Fannie Lou Hamer, and Robert Kennedy – and he led Vanderbilt’s small group of black students to a meeting with the university chancellor to push for better treatment.

On the basketball court, he experienced an Ole Miss boycott and the rabid hate of the Mississippi State fans in Starkville. Following his freshman year, the NCAA instituted “the Lew Alcindor rule,” which deprived Wallace of his signature move, the slam dunk.

Despite this attempt to limit the influence of a rising tide of black stars, the final basket of Wallace’s college career was a cathartic and defiant dunk, and the story Wallace told to the Vanderbilt Human Relations Committee and later The Tennessean was not the simple story of a triumphant trailblazer that many people wanted to hear.  Yes, he had gone from hearing racial epithets when he appeared in his dormitory to being voted as the university’s most popular student, but, at the risk of being labeled “ungrateful,” he spoke truth to power in describing the daily slights and abuses he had overcome and what Martin Luther King had called “the agonizing loneliness of a pioneer.”

Strong Inside is the first book by Andrew Maraniss. A partner at McNeely Pigott & Fox Public Relations in Nashville, Andrew studied history at Vanderbilt University as a recipient of the Fred Russell–Grantland Rice sportswriting scholarship, earning the school’s Alexander Award for excellence in journalism and graduating in 1992. He then worked for five years in Vanderbilt’s athletic department as the associate director of media relations, dealing primarily with the men’s basketball team. In 1998, he served as the media relations manager for the Tampa Bay (Devil) Rays during the team’s inaugural season, and then returned to Nashville to join MP&F. The son of Pulitzer Prize-winning journalist and best-selling author David Maraniss and trailblazing environmentalist Linda Maraniss, Andrew was born in Madison, Wisconsin, grew up in Washington, D.C. and Austin, Texas and now lives in Brentwood, Tennessee with his wife Alison, and their two young children.

“I covered basketball during the years Perry Wallace was a Vanderbilt, learning first-hand the stories of so many African-American athletes. Many of them were pioneers in one respect or another, but none whom I ever spoke with endured such an experience as did Wallace – as related so thoughtfully and comprehensively in this sensitive biography by Andrew Maraniss. Arthur Ashe entitled his history of the black athlete A Hard Road to Glory. No road could have been harder than Perry Wallace’s, no glory more satisfying.”—Frank Deford, Sports Illustrated/NPR

“Andrew Maraniss has written a gripping account of the tortured ordeal suffered by Perry Wallace, the celebrated college basketball star, who, in 1966 as a Vanderbilt Commodore, broke the racial color barrier in the Southeastern Conference. It is a story of a young black student’s courage in the face of taunting abuse from hostile, opposing fans – and the dissension that faced him on the Vanderbilt campus.”—John Seigenthaler, Former Tennessean Editor

The book’s epigraph, taken from Martin Luther King Jr.’s “Letter from Birmingham Jail,” makes note of the “agonizing loneliness that characterizes the life of the pioneer.” In what specific ways did loneliness agonize Perry? In what ways did he respond to it?

Maraniss doesn’t begin the book with the history or action or drama that categorizes the rest of the book. He begins it at its end, with one of Perry’s former teammates asking his forgiveness. Why do you think the author frames the book in this way? What is gained in the use of this technique? How does it ready your mind for what comes later in Perry’s story?

In the second chapter, Wallace recalls what his father taught him about “what it takes to make it in America.” What childhood lessons does Perry employ most during his time at Vanderbilt?

Put yourself in Wallace’s shoes during his time at Vanderbilt, considering especially those “hellish” road trips that he had to endure. Might you have reacted differently than Wallace? How might you characterize Wallace’s reaction?

Strong Inside is a sports book, but it isn’t a necessarily book about sports. Basketball gave Perry the opportunity to break down the barriers that he did, but is that where the importance of sport ends in Perry’s narrative? In what other ways does the lens of athletics contribute to the history of the South in the 1960s?

In the final chapter, Perry responds to a teammate’s request for forgiveness: “Don’t think another thing of it. We were all just kids.” What do you make of Wallace’s mercy, his sense of peace? Do you find that it responds appropriately to the racism in the South in the 1960s?

Unique to Perry’s story is that he didn’t go to Vanderbilt embracing the idea of being a pioneer, focusing instead on the school’s academics. How does his reluctance to play the role of pioneer devolve in his time there? What is your definition of a pioneer?

Why do you think Wallace’s experience has flown under the radar of civil rights history?

What do you make of Wallace’s decision to do the tell-all interview with The Tennessean?

a. How did it strengthen or weaken his cause as a pioneer?

b. Specifically discuss the ironic relationship between Wallace’s isolation and his fame at the time of the interview.

Does Wallace’s story change your perspective on the United States in the 1960s? How?

If you had the opportunity to sit down with Perry Wallace, what would you say to him? What would you ask him?