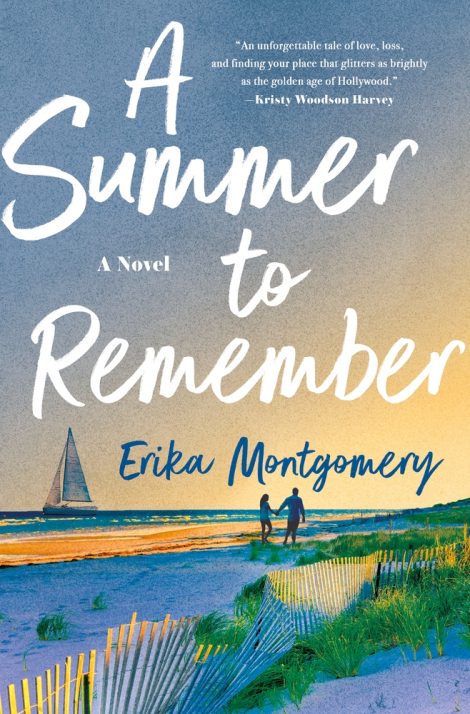 A SUMMER TO REMEMBER

Erika Montgomery’s A Summer to Remember is “an unforgettable tale of love, loss and finding your place that glitters as brightly as the golden age of Hollywood.”–Kristy Woodson Harvey, USA Today Bestselling author of Feels Like Falling

For thirty-year-old Frankie Simon, selling movie memorabilia in the shop she opened with her late mother on Hollywood Boulevard is more than just her livelihood—it’s an enduring connection to the only family she has ever known. But when a mysterious package arrives containing a photograph of her mother and famous movie stars Glory Cartwright and her husband at a coastal film festival the year before Frankie’s birth,

Erika Montgomery’s A Summer to Remember is “an unforgettable tale of love, loss and finding your place that glitters as brightly as the golden age of Hollywood.”–Kristy Woodson Harvey, USA Today Bestselling author of Feels Like Falling

For thirty-year-old Frankie Simon, selling movie memorabilia in the shop she opened with her late mother on Hollywood Boulevard is more than just her livelihood—it’s an enduring connection to the only family she has ever known. But when a mysterious package arrives containing a photograph of her mother and famous movie stars Glory Cartwright and her husband at a coastal film festival the year before Frankie’s birth, her life begins to unravel in ways unimaginable.

What begins is a journey along a path revealing buried family secrets, betrayals between lovers, bonds between friends. And for Frankie, as the past unlocks the present, the chance to learn that memories define who we are, and that they can show us the meaning of home and the magic of true love.

Experience the salty breeze of a Cape Cod summer as it sweeps through this sparkling, romantic, and timeless debut novel tinged with a love of old Hollywood. 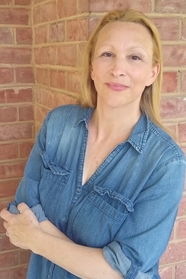 A card-carrying cinephile and native New Englander, novelist Erika Montgomery lives with her family in the Mid-Atlantic where she teaches creative writing and watches an unspeakable amount of old movies.

“A Summer To Remember is an unforgettable tale of love, loss and finding your place that glitters as brightly as the golden age of Hollywood.” — Kristy Woodson Harvey, USA Today bestseller

“A Summer to Remember is the perfect read for summer–or any time you’re looking for an escape into a great book.” – New York Times bestselling author Karen White

“A Summer to Remember deftly pulls back the curtain on the truth behind perceived betrayals and how uncovering a complicated past can heal us.” – Marjan Kamali, award-winning author of The Stationery Shop

“The perfect novel for a beach bag, complete with friendship, family and a dash of romance.” — Christina Clancy, author of The Second Home

The premiere destination for Hollywood collectibles and souvenirs.

Bring home your own piece of movie magic!

Or visit our store online at: thememoryshop.com.

It always begins with the blush. A feverish flush that starts its creep from the throat to the jaw until finally soaking the entire face. Lips start to quiver before they are rolled inward, caught briefly between teeth and gently bitten. Then breaths, pulled in and exhaled previously in silence, are suddenly audible, and noticeably quicker.

Frankie knows the sequence by heart.

Her mother used to call it The Bolt, the instant when a customer meets the piece of movie memorabilia that’s meant to be hers, because it’s just like the lightning strike of love at first sight.

The woman currently in a state of infatuation on the other side of the counter is Carol from Cleveland. And Carol, Frankie just learned, has spent all morning on a tour bus, crawling past the gated homes of movie stars, so she only has a few minutes before she and her husband, Joe—he’s the doughy, sour-faced man who didn’t make it farther than the entryway—have to get back on the bus. But Carol read about The Memory Shop online, and she just had to see for herself. A memorabilia shop where all the collectibles are displayed on mannequins instead of behind glass? Incredible! Joe isn’t much for movies, unfortunately, Carol has also explained, but he’s allowing her ten minutes to browse, even though Joe doesn’t understand why anyone would want to see, let alone buy, a used lipstick—even if it did graze Marilyn Monroe’s lips.

Because the minute Carol from Cleveland stepped inside The Memory Shop, her gaze—her heart—belonged to the chocolate-brown leather gloves that Frankie has just peeled off the Barbra Streisand mannequin and set down on the counter for closer inspection.

When the fingers are evenly spread out on the glass, Frankie steps back to allow the rich smell of buttery suede to rise, as warm and fragrant as freshly baked bread.

Because the connection between smell and memory is fierce.

Maeve Simon taught her daughter that, too.

“Beautiful, aren’t they?” Frankie whispers in the hush.

“Gorgeous.” Carol stares, spellbound, her nostrils expanding with every breath. She bites her lip. “And you’re positive these are the ones Katie wore in front of the Plaza when Hubbell came over and she…?” Carol’s fingers sweep the air, miming Barbra Streisand’s famous farewell at the end of The Way We Were, when she lovingly brushes Robert Redford’s hair off his forehead, knowing he’s never coming back to her.

The gesture is so swift and sure that Frankie suspects it isn’t the first time Carol from Cleveland has made it.

“Every item comes with a certificate of authenticity,” Frankie says, freeing the sample COA she keeps beside the register and sliding it forward. “But it just so happens these gloves come with extra proof…”

When Carol glances up quizzically, Frankie directs her gaze to a streak of peach across the index and middle fingertips.

Leaning in, Carol studies the stain, her eyes growing big, swimming with expectation when she raises them. She swallows hard but still her voice cracks. “Is that…?”

“No!” Carol sucks in a sharp breath through the O she’s made of her lips and flattens her hands on the counter like a passenger seeking balance on a pitching ship. Her gaze drifts off into the distance. “The Way We Were was the first movie I ever saw with a boy,” she says, her voice soft with recollection. “Andy Foster.” She practically sings the name, and Frankie envisions a young man with neatly combed hair and a smile too wide for his narrow face. “We were at the drive-in in his father’s Buick. My sister let me borrow her pink platforms.” Carol’s lips rise wistfully. “Andy told me I looked like her. Barbra Streisand, I mean. But I was so young then, of course.” Somehow her already sunburned cheeks manage to blush deeper. “And thin.”

Frankie takes a moment to consider Carol’s face—the pale, almond-shaped eyes, the high cheekbones. She can see it.

“Carol!” From the entry, Joe sounds the alarm, shoving his phone screen at them. “It’s been ten minutes. Let’s go!”

Carol offers a mournful smile before she swivels to scan the room, her fingers still clutching the rounded edge of the counter so tightly Frankie suspects Joe may have to pry her away from these gloves. Maybe even the whole store.

“Where did you get all of it?” Carol asks, partly curious and partly, Frankie suspects, looking to stall.

“My mother started collecting when she first got out here. She worked on film sets and used to bring home what they didn’t want. You’d be amazed how much they throw away after a movie wraps. Twenty years in this business and we still are.”

Frankie bristles at the pronoun, the ease with which it still slips out. But nearly a year after losing her mother, she still can’t seem to use another. Any more than she can call The Memory Shop her store. Until the day she locks the door for the last time, it will always be their store.

“Wow.” Carol’s gaze has shifted to the box beside the register that contains her mother’s collection of old ticket stubs. “That’s a lot of tickets.”

Frankie smiles. “My mother and I saw a lot of movies.”

She hesitates, but only for a moment. “Go for it.”

Carol drives her hand into the soup of tickets, letting the stubs fall off her fingers like grains of sand. “You’re not like the other memorabilia shops.”

Frankie lowers her voice to a conspiratorial whisper. “Great, isn’t it?”

Accustomed to locked cases and DO NOT TOUCH signs, customers are always surprised, even confused, to see precious artifacts and costume pieces displayed on mannequins, left unguarded, vulnerable to curious fingers. Sellers, of course, are downright horrified. Even the ones who have been visiting The Memory Shop for years still can’t hide a little shudder when they step inside and don’t see a locked display case in sight. But her mother always insisted the connection between fantasy and reality was found through the senses, not through glass. And that memory was a living thing, and like all living things, it needed air to survive.

And Frankie knows, no matter how badly Carol from Cleveland wants to touch the glove that repeatedly stroked Robert Redford’s beautiful, furrowed brow, she won’t dream of asking. Because she doesn’t think she can.

Carol’s head snaps up at the offer, blinking furiously with disbelief. As she shakily slides her right hand into Katie Morosky’s glove, they both know her fingers aren’t as long and slender as Barbra’s, but it doesn’t matter. Because when she lifts her hand for another perfect imitation of Barbra Streisand brushing back Robert Redford’s sun-kissed hair, she’s not middle-aged Carol with the impatient husband waiting in the doorway to shuffle her back to reality. She’s teenage Carol, giddy and hopeful in her sister’s platform heels, sitting in the front seat with a boy who made her feel special and beautiful and just right. A boy who, maybe, like Hubbell Gardner, was only hers to have for a short time.

And then, after pulling in a deep breath, Carol closes her eyes, and in a voice that is as even and reverential as prayer, she whispers Katie’s famous line to Hubbell after seeing his new love waiting across the street: “Your girl is lovely, Hubbell.”

This time Carol doesn’t glance back. The glove still on, she tears open her fanny pack, plucks out her credit card, and slides it across the counter, a small but decided smile spreading her chapped lips as she whispers, “Don’t bother with a bag.”