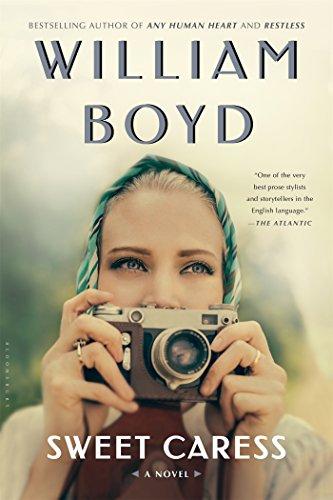 When Amory Clay was born, in the decade before the Great War, her disappointed father gave her an androgynous name and announced the birth of a son. But this daughter was not one to let others define her; Amory became a woman who accepted no limits to what that could mean, and from the time she picked up her first camera, one who would record her own version of events.

Moving freely between London and New York, between photojournalism and fashion photography, and between the men who love her on complicated terms, Amory establishes her reputation as a risk taker and a passionate life traveler.

When Amory Clay was born, in the decade before the Great War, her disappointed father gave her an androgynous name and announced the birth of a son. But this daughter was not one to let others define her; Amory became a woman who accepted no limits to what that could mean, and from the time she picked up her first camera, one who would record her own version of events.

Moving freely between London and New York, between photojournalism and fashion photography, and between the men who love her on complicated terms, Amory establishes her reputation as a risk taker and a passionate life traveler. Her hunger for experience draws her to the decadence of Weimar-era Berlin and the violence of London's Blackshirt riots, to the Rhineland with Allied troops and into the political tangle of war-torn Vietnam. During her ambitious career, the seminal moments of the twentieth century will become the unforgettable moments of her own biography as well.

In Sweet Caress, Amory Clay comes wondrously to life, her vibrant personality enveloping the reader from the start. And, running through the novel, her photographs over the decades allow us to experience this vast story not only with Amory's voice but with her vision. William Boyd's Sweet Caress captures an entire lifetime unforgettably within its pages. It captivates.

William Boyd is the author of fourteen novels including A Good Man in Africa, winner of the Whitbread Award and the Somerset Maugham Award; An Ice-Cream War, winner of the John Llewellyn Rhys Prize and shortlisted for the Booker Prize; Any Human Heart, winner of the Prix Jean Monnet and adapted into a BAFTA-winning Channel 4 drama; Restless, winner of the Costa Novel of the Year, the Yorkshire PostNovel of the Year and a Richard & Judy selection; the Sunday Times bestseller, Waiting for Sunrise and, most recently, Solo, a James Bond novel. William Boyd lives in London and France.

“In addition to the psychologically rich characterization, a wealth of atmospheric details . . . add depth, immediacy, and authenticity to an engrossing, moving story.” —Publishers Weekly

“Few contemporary writers are able to evoke the ambiance and drama of our recent past as forcefully as Boyd . . . And [his] characters are as beguiling as his prose.” —The Washington Post

“Entertaining and seemingly effortless in their fluency, [Boyd's] novels conceal insights into human behavior that are more intricate than may first appear.” —The New York Times Book Review

When Amory is born, her father mistakenly announces the birth of their “son, Amory.” How does this mistake set the scene for Amory’s rebellious nature and penchant for moving in what are traditionally considered male spheres—first photography, and then warfare?

Throughout the novel, Boyd makes use of “found” photographs to enhance Amory’s story. What effects did these remnants of real lives once lived have on your reading of this fictional character?

When Amory is barely a young woman, her father attempts to kill himself and Amory by drowning the family car in a pond. Although he is unsuccessful, this incident permanently affects his relationship with his daughter. Amory says, “The bonds had been broken and all that was left was the official designation—a father, a daughter” (250). What other events in Amory’s life leave similar stains?

Amory says, “I came to learn that I was joining a sorority of women photographers, all working and making a living in Berlin, Hamburg, Vienna and Paris. It was empowering, not disappointing—like becoming a member of a secret society. We were everywhere, the women, cameras in hand” (82). Discuss the nature of this “sorority.” What does Boyd gain by fictionalizing Amory’s life, instead of discussing the real life of one of these historical female photographers?

Amory’s first professional fiasco with Miss Veronica Presser arises out of Amory’s desire to make the photograph “as natural as possible” (65). Later, after her Berlin photographs are confiscated, Amory regrets, to a certain extent, her desire to start a “scandal” with her photographs. Discuss the tension between naturalness and artifice in Amory’s photographs, continuing through her time as a war journalist. Are they ever really natural?

What differences and similarities do Amory’s love affairs possess? What do they tell us individually and as a whole about Amory’s life and development? How should we interpret the hanging thread of her relationship with Hugo Torrance?

Consider the role that war plays in Amory’s life. She argues that it is omnipresent— especially given her father and her husband’s careers as soldiers—yet it appears to not play a significant role until Amory decides that it will, as when she decides to join the Vietnam contingency as a photojournalist. Would you consider her relationship with warfare superficial, or something more profound?

Amory’s father was considered mentally ill and subjected to early treatments including shock therapy, while Sholto was an alcoholic as a means of dealing with his own trauma. Amory, in contrast, fell victim to physical illness late in life. What do these various examples say about the role of illness in the novel?

When Amory Clay becomes a mother, she locks away her cameras, saying, “The old Amory Clay had disappeared, drifted away” (313). Is this true? Although she doesn’t take physical photographs, does Amory’s yen for experiences diminish during this period of her life? What brings “the old Amory Clay” back finally?

When she is considering going to Vietnam, Amory says, “My education as a person, so I reasoned, would never be complete if I didn’t do this, if I didn’t see for myself—and then see myself, plain. I needed to learn how I would react and respond, what it would tell me about my life and my being” (351). Do you think that this is true for Amory? Did she have to leave her life behind to go to Vietnam for the sake of her full education? Discuss the extent to which her decision was both fulfilled and unfulfilled.

Consider Amory as a parent and the presence of her children in her adult life. Does it strike you as intimate? Distant? In particular, discuss Amory and Blythe’s relationship, especially looking at Blythe’s decision to move to America. Does she have Amory-esque characteristics about her decisions? What commentary on parenthood in general does this example provide for readers?

At lunch one day, Amory’s Barrandale neighbor, Greer, jokes, “Any more secrets, Amory?” (287). How do you account for Amory’s secrecy in her later life? What keeps her from sharing the details of her tumultuous and exciting life to those around her?

By the end of the novel, it is clear that Amory is very determinedly relating her history to a given reader, first with her extensive recollections on her early life, and later with the “Barrandale Journal.” What kind of a history book does this begin to resemble? What image of history do we gain from Amory’s telling of it?

“It’s strange how strong emotions can be so easily diminished as your life continues; how deepest intimacies become commonplace half-recalled memories . . . Nothing stirs any more” (179). In many ways, the novel is a reflection on aging and one’s relationship to the past. Consider this excerpt in light of Amory’s decision to end her life at age seventy, and with the knowledge that she continues to live thirteen years longer, dying in 1983 by her own hand.

What kind of note does the last paragraph of the novel strike? Discouraging? Hopeful? What image of Amory is the reader left with at this moment, and how does she differ from the Amory seen throughout the novel, if at all?