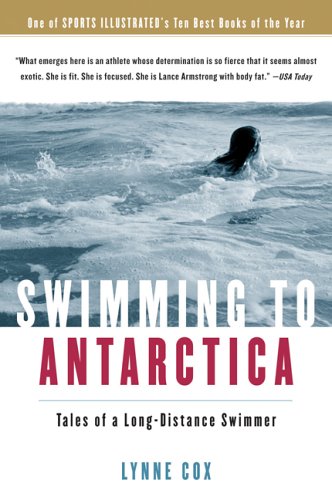 Before she turned twenty, Lynne Cox had broken the men’s and women’s world records for swimming the English Channel, swum from Catalina Island to the California mainland, and braved the dangerous Cook Strait between New Zealand’s North and South Islands. But that was just the beginning.

Capturing the thrill of a life dedicated to excellence, Swimming to Antarctica tells the remarkable stories behind Lynne”s victories, which went on to include swimming across the Bering Strait-a feat that, according to Mikhail Gorbachev, helped diminish tensions between “Thrilling, vivid, and lyrical, an inspiring account of a life of aspiration and adventure.”-the U.S.S.R.

Before she turned twenty, Lynne Cox had broken the men’s and women’s world records for swimming the English Channel, swum from Catalina Island to the California mainland, and braved the dangerous Cook Strait between New Zealand’s North and South Islands. But that was just the beginning.

Capturing the thrill of a life dedicated to excellence, Swimming to Antarctica tells the remarkable stories behind Lynne”s victories, which went on to include swimming across the Bering Strait-a feat that, according to Mikhail Gorbachev, helped diminish tensions between “Thrilling, vivid, and lyrical, an inspiring account of a life of aspiration and adventure.”-the U.S.S.R. and the United States-and becoming the first to swim the Strait of Magellan (the most treacherous three-mile stretch of water in the world). As Lynne recalls the vivid details behind these challenging adventures, Swimming to Antarctica also reveals the humble yet undaunted spirit that not only ensured her survival but also opened the hearts and minds of those who cheered her on at every stage. Whether she is recalling her body’s transformation in iceberg-riddled waters or a nighttime swim in which flying fish sailed overhead in a giddy cascade, Lynne approaches each memory with a sparkling sense of wonder. Hers is a unique story with broad appeal; there is much to discover about the world, and about ourselves, while following the journey described in Swimming to Antarctica.

Lynne Cox started swimming almost as soon as she could walk. By age sixteen, she had broken all records for swimming the English Channel. Her daring eventually led her to the Bering Strait, where she swam five miles in thirty-eight-degree water in just a swimsuit, cap, and goggles. In between those accomplishments, she became the first to swim the Strait of Magellan, narrowly escaped a shark attack off the Cape of Good Hope, and was cheered across the twenty-mile Cook Strait of New Zealand by dolphins. She even swam a mile in the Antarctic.

Lynne writes the same way she swims, with indefatigable spirit and joy, and shares the beauty of her time in the water with a poet’s eye for detail. She has accomplished yet another feat–writing a new classic of sports memoir.

“Ultimately, Cox’s memoir is about the joy of exploring the impossible. She’s done things the rest of us can only imagine-and she’s written a book that helps us to imagine them with clarity and wonder.”—The Boston Globe

“Gripping reading . . . Swimming to Antarctica is a portrait of rare and relentless drive.”—Sports Illustrated

“Thrilling, vivid, and lyrical, an inspiring account of a life of aspiration and adventure.”—Oliver Sacks

What goals could Lynne’s memoir inspire you to pursue? At the moment, what is your Antarctica?

Discuss the various obstacles you perceive in reaching that goal. Is there a common denominator among them? As a group, develop detailed action plans for overcoming these obstacles, using the short-term and long-range approaches described in the book.

What do the italicized passages tell us about Lynne’s techniques in coaching herself? Arranging your discussion group in pairs, create messages for one another that echo Lynne”s realistic but encouraging self-talk.

In the first chapter, Lynne recalls asking a childhood friend for the secret to becoming a fast swimmer. Joyce replied that she simply did what her coach asked of her. How can we discern whether a coach or mentor is trustworthy? Whom will you invite to be part of your team of “life coaches”?

Swimming to Antarctica provides much insight into the art of persuasion. What techniques did Lynne use to persuade others, from Soviet officials to New Zealand fans, to share in her dream? Discuss the toughest naysayer in your life. Through role-playing, enlist other group members to explore the process of changing this person’s point of view.

In her afterword, Lynne shares an anecdote about a schoolboy who asked her how she would respond to failure. Her solution is not to lower the bar; she even suggests that in such situations, perhaps the bar hasn”t been raised high enough. She prescribes learning from a defeat and then persisting in new attempts. What past defeats still trouble you? How would it feel to revisit this attempt, raising the bar even higher next time?

Lynne often dispelled stereotypes about gender and body type in her encounters around the world; her physiology was actually ideal for the challenges of long-distance swimming. Have you ever been “mislabeled” in a gym setting? How would you characterize your best athletic attributes? What forms of exercise come naturally to you?

Choose a physical-fitness goal that you would like to achieve six months from now. Choose an additional one that will require two years to achieve. How can you apply Lynne”s process and timelines to these aspirations? Her steps include acclimating herself, training in waters similar to the final course, and finding experienced navigators. What similar steps will you need to take on a daily, weekly, and monthly basis? What role model will you choose within this field? What world record would you most like to set?

For safety as well as inspiration, measurement and mathematics were essential to Lynne”s progress, from assessing her speed to undergoing numerous medical tests. Before embarking on any fitness program, you should consult a physician. But the consultation should provide you with more than anecdotal information; it’s an opportunity to begin tracking all of the data related to your health. Create a notebook or electronic database that combines both your “vital statistics” and the progress of your athletic goals. Who will be on your team of statisticians?

From swimming in a hailstorm as a child to watching twenty-foot waves crest at the Cape of Good Hope, Lynne is continually drawn to the most dramatic conditions nature has to offer. How does nature become both her companion and her competitor? What do you think accounts for the distinction between athletes who excel in these rugged, unpredictable settings and those whose milieu is an indoor lane or court? What workout settings do you prefer?

Lynne relies solely on her body’s own capabilities in reaching her goals, swimming without a wetsuit and carefully guarding her health before each event. What enables her to avoid the temptations of steroid use or other performance enhancers? In your opinion, what separates “purist” athletes from the rest?

Choosing from the many locales visited in Swimming to Antarctica, assign a destination to each of your group members to research. In a subsequent meeting, share travelogues discussing cultural customs, cuisine, weather conditions, topography, and other interesting features.

The challenges described in the book range from the concrete (sharks, fog) to the abstract (distrust, lack of imagination on the part of her sponsors). What challenges were particular to each location?

Create a timeline of Lynne’s swims. How have political conditions changed (if at all) in each of these settings since she visited them? What accounts for the distinction between stability and instability in these regions? What made Lynne’s long-distance swims such a politically charged endeavor in some locations but not in others?

Lynne writes that her experience in Egypt taught her how to recognize her own limitations. What did the outcome of this particular trip also teach her about nationality, gender perceptions around the world, and preparing for international travel in general?

If you had an unlimited budget, which of the book’s locations would you most like to visit? What would your itinerary look like? What items would you pack? Which traveling companions would you bring?